Samuel Ace, Our Weather Our Sea

Because I am behind on everything, I am only now getting into American trans and genderqueer poet and sound artist Samuel Ace’s fourth full-length poetry title, Our Weather Our Sea (Black Radish Books, 2019). The poems in Our Weather Our Sea simultaneously exist as sequence, accumulation of lyric fragments and as a lengthy, single sentence. The book is sectioned into four—the opening prose poem, “An Ocean-Like Hush,” the accumulated suite-section of self-contained prose poem fragments, “I MET A MAN,” the call-and-response of lyric journal sketches, “HIS LETTERS WERE NOT LOSS,” and the seven extended prose poems that make up the final section, “THESE NIGHTS.” At the core of the collection is an engagement with body and gender and language, and the interplay between body and gender and language.

I came to deliciously corrupt 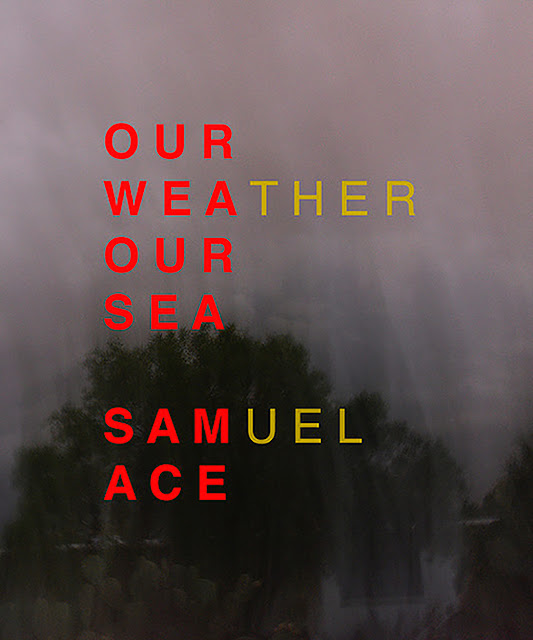 It’s easy to understand Samuel Ace’s engagement as a sound artist, given the importance of sound and cadence through the lyric on display here, one that sweeps and staggers and twists in wonderful ways. Perhaps these are poems meant to be heard aloud, finally. As well, beneath and through the lyric repetition and shifts of language come a sequence of engagements of daily life, from love and sex to friends, and even touching on daily activities and errands. As he writes as part of “January 9th 5:01:55 AM,” in the third section: “Well enough the interpush   the putty / ass   the hot tub itch   the bearded / farts   poop on the rug   the concrete / crack   I’ve been singing for the lost / my spirit dog   my tao of days [.]” He writes on simple things, on complexities, and writes with sudden twists and breaks and turns. In a 2018 interview over at Touch the Donkey, Ace spoke specifically of three poems that appeared in the journal, that now also sit in the third section of this recent collection:

A: In “So here is a crib” and “Where are you hiding,” as in much of my recent work, I am interested in how language intersects with specific moments of daily life. The pieces are fugue-like, using repetition and other sonic/musical elements to create layers of meaning as the poems unfold. I believe that “The cells” does the same, in the context of the hidden and daily violence of incarceration, forced isolation and solitary confinement.

Ace writes of being able to openly and fluidly exist with certainty and principle, writing out possibility, and the possibility of change, and becoming. Ace writes of a softness and stillness as well as a violence, both figurative and literal, as he writes in the poem “Standing at a Desk of Cranberries,” from the final section in the collection: