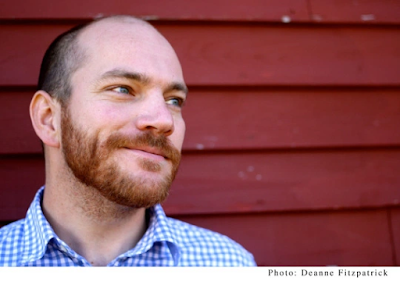 Bart Vautour is a writer, editor, and teacher. He is editor of the Throwback Series of books for Invisible Publishing and co-editor of a series of texts about Canada and the Spanish Civil War. He lives in K’jipuktuk/Halifax with his partner, daughter, and Marley the dog.

Having published critical work, edited collections, and scholarly editions, publishing my first collection of poetry was both a familiar as well as disorienting process. I think it was mostly so much fun—especially working with the good folks at Invisible—that the poetic floodgates have opened: I’m seeing future collections swirling around everywhere. Oh, and I’m probably willing to take a few more poetic risks now.

It feels as though answering this question betrays prose, but here goes: I find prose’s imaginary fully present in poetry but find difficulty finding poetry’s contentment with an unresolved constellation of things when I turn to prose. There are exceptions, of course, but poetry is where I want to go to work with a concept. Prose is where I might end up when that concept becomes rote enough for a more critical explication—when I want to work through the concept.

Starting? Starting isn’t the problem. I’ll start lots of things. Planning and starting things is the closest I’ve come to getting the poetic equivalent of “runner’s high” (which I’m told is an actual thing. I’m quite happy to leave it to the experience and expertise of others). Once the planning is there…do I write it or am I happy to look at a blueprint as a proof-of-concept? Depends.

I have tended to work in two modes: 1) I write poems for the pleasure of writing poems and rarely will anyone else see these…and I’m absolutely fucking delighted with this scenario; and, 2) I work on a project that takes a shape wherein each poem in the project or collection relies on the other poems to build that shape. Did I mention that I love the project-planning stage of writing. Like, I really love it. Once a concept arrives that I’m keen to explore and once I’ve got a plan of how I want to explore it, the writing usually comes quickly. The two processes (poems and projects) strike an important balance for me. It’s a way of keeping some for me, while making some to share.

I enjoy readings insomuch as they are one way of making art with friends (and making new friends through art). I’m certainly not my happiest as the centre of attention.

Yes. Hmmm, I’m mostly interested in thinking through a poetic epistemology where theoretical expectations and anticipated patterns of thought can stray from expected routes (where it is ethical for such meaning to meander) rather than rest in solidified or consolidated modes of making meaning. I’m not the first to be interested in actively using poetics as an opening rather than a closing. I’m both very structural and very irreverent in my thinking, which has sometimes caused some hard contradictions. But those two things allow a great deal of playfulness too…somewhere along the lines of thinking subversion is only subversion because structural conditions are there to subvert.

Well, I keep telling my students to be generous and generative. Given what we know about our current social, cultural, and economic conditions, we know that “roles” are going to be different and dependant on the situatedness of the writer. But if we are going to resist the homogenization of different writers into a single role, we also have to be generous and generative as community of writers. Easily said, eh?

An editor has been crucial for getting me to polish things…to push beyond conceptualization and a “good-enough” project and into a place where, upon reflection, there are far fewer loose-fitting parts.

Don’t be a jerk. Seriously though, there is a very particular and rather ridiculous circulation of a jaded scarcity narrative among some poets (among other ungenerous ideas) that leads people to be weirdly unsupportive and competitive. This tends to result in people not playing well with others, trying to form poetic camps, or making spurious arguments centring on formal distinctions. Just…don’t be a jerk.

The major appeal is that they are different things… My attention span (and my work) demands that I switch between the two in order to remain productive. Also, see #2, above.

My writing has seasons: a day during the academic semester is quite different than a day during my research and writing time (April through August). Away from my university office, I have a dreamy writing and research scenario: my (shared) desk is 20m from the ocean and I take breaks from writing to pull weeds in the garden.

My partner is also a writer and, rather amazingly, we tend to give our stalled time to the other person to work on some things. That often takes the form of an adventure with our kid while the other person gets some writing done.

I’ll take it where I can get it…which means I’m interested in finding things both inside and outside of poetry. Many of my close friends are visual artists or musicians and I am continually in awe of the way they make work and the way they show their work…it feels—to me—a little less like a closed network of conventions.

My early academic work was on the 1920s and 1930s in Canada, so Dorothy Livesay and Frank Scott feel like they are each on a shoulder variously yelling into my ears. I mostly ignore it, but there is a poem in The Truth About Facts—“Facts about Vancouver, 1938”—that I wrote as an imagined collaboration between the two (in reality, they wouldn’t speak to each other). Now, I tend to look for poetry where you can feel the genuine curiosity in the work…poets such as Sue Goyette, Sachiko Murakami, Gary Barwin, Sonnet L'Abbé, Lisa Robertson, Sina Queyras, and Stephen Collis (among others).

Write a collaborative collection of poetry.

If my work wasn’t with books...I don’t know what I’d do. I think my favorite job ever was working on a farm as a teenager making hay on the Tantramar Marsh…but (surprise, surprise) I’m happy to remember that from afar.

The lack of pressure. I wasn’t a bookish child. I learned to read later than most. I think if there had been any expectation that I might write, I would have run the other way.

I’m going to dodge the weighty notion of “great” books (I’m too irreverent for that), but I’m happy to say that Tess Liem’s Obits. was my favorite book of Canadian poetry last year. The 2018 Spanish documentary The Silence of Others (El silencio de otros) was a film that is extremely close to my heart and my thinking (much of my academic work has been focused on the Spanish Civil War for the past decade…keep an eye out for a new anthology of Canadian writing on the Spanish Civil War).

I’m working on a poetry collection that explores the ways in which the rapid movement of both capital and people is continually collapsing a rural/urban divide between the Maritimes and so-called cosmopolitan centres.

Posted by rob mclennan at 8:31 AM
Labels: 12 or 20 questions, Bart Vautour, Invisible Publishing