I inscribe my gender like a bruise on the perfect smooth flesh of
your bright morning
the dawn (and I)
begin as colour across the horizon, granulated and coarse, not
ordered or linear, submerged in light and dark
incorrigible diffuse daybreak
I confess my beauty

then you murder it. (“Foreword”) 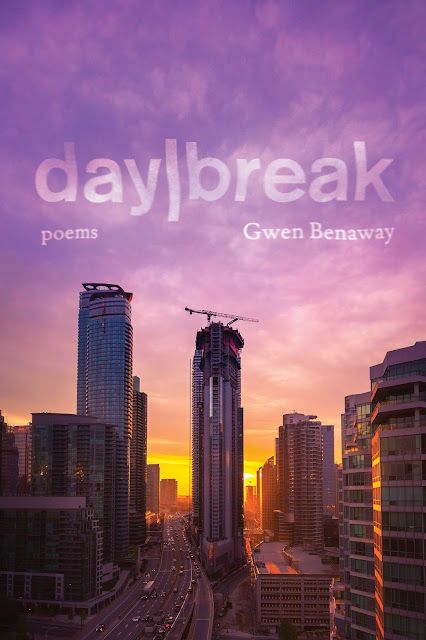 And so opens day/break (Toronto ON: Book*hug, 2020), Governor General’s Award-winning poet Gwen Benaway’s fourth full-length poetry title, and first since her award-winning Holy Wild (Book*hug, 2018). “I am not a girl / but a creature made of smoke / and exhaustion.” she writes, to open the first of her forty-two poem lyric, composed in the confessional mode, a structure bookended by a single-page “Foreword” and “Postscript.” She continues: “I want a poem scrubbed of / dignity, / a body / not brave / but present.”

The lyric sequence day/break writes of the physical body, of “the everyday politics of the trans feminine body,” and the physical presence of such a body, and such an existence, as well as the exhaustion of having to constantly defend the simple act of being present. “a poem / or a transsexual is never // made or unmade // by our descriptions // the chromosomal / line breaks.” she writes, to open the fourth of these unnumbered pieces. Benaway ties the act of writing and rewriting with both gender transition and the book-length unfurling of her poem, both experiences around composition and being, making something out of something, and something out of something else. Where do either begin, and what makes being transgender, which her poem argues is natural, honest and freeing, so threatening to so many outside of these experiences? This is a book-length poem working through, and working towards, living comfortably and openly and finally within the body, and attempting to leave trauma and violence perpetrated by others well behind. In an interview with James Lindsay posted at Open Book on September 5, 2018, she responds:

I’ve always been interested in intimacy, sex, and love as core parts of what I write about, especially since I transitioned, because I find that our intimate relations reveal so much of our oppressions. Coming from a family with intergenerational trauma and normalized domestic violence, I grew up watching my mother, my aunts, and my gookum be abused by the men in their lives. I don’t want to say that the violence was all of what they were or that it was even all of what the men in my family were, but it left me with a lifelong interest in trying to understand how intimate violence is inherited, shaped by history, and how it co-exists alongside of love.

Part of my process through my transition was shaped by being in an abusive relationship with a cis guy so I found myself continually reflecting on the idea of romantic love and trauma. I started to unpack that ideal of love for myself, moving into polyamory, opening up about my bisexuality, and falling in love with another woman. I realized that the ideas of love that I had been given were rooted in colonization, transphobia, state violence, and capitalism as well as the violence which I had grown up with. So I started imagining a way out of that kind of love for myself through my writing.

I went through so much transphobia and abuse with my ex partner and other men that it really broke down my optimism around love, but I ended up finding spaces within the idea of “love” that felt good for me: kinship, sisterhood, polyamory, and loving other women. My idea of love transformed as I transformed as a woman and I realized that the idea of love which I was raised with (and force fed by mainstream culture) didn’t have space for “girls like me”. We weren’t going to be treated well by men or valued equally to cis women (at least, I wasn’t) so we needed to make our kind of love. And that’s what I think I’ve been doing.

Making and writing a new kind of love for me (and others like me). I think love poetry is shamed as is writing about intimacy, but what and who we love (and fuck) is the space where violence, healing, and joy most commonly happens. I think it’s an important feminist decolonial intervention to write about/talk to/embody your love. It’s a generative resistance that disrupts notions of transmisogyny and cissexism to say “hey I’m a trans girl in love and here’s why it matters”.

Posted by rob mclennan at 8:31 AM
Labels: BookThug, Gwen Benaway