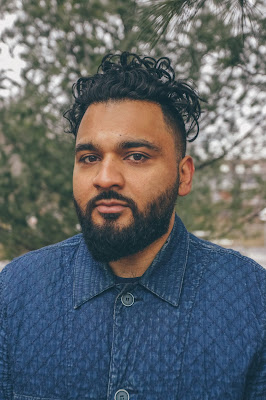 Adnan Khan [photo credit: Magida El-Kassis] has written for VICE, the Globe and Mail, and Hazlitt. He has been nominated for a National Magazine Award and in 2016 won the RBC Taylor Emerging Writer Award. There Has to Be a Knife is his first novel. He lives in Toronto.

I got to address a set of stylistic, intellectual, philosophical and aesthetic concerns, and that feels personally valuable. That feels life changing, in the sense that there was a release from constraints I'd been thinking about for a long time.

2 - How did you come to fiction first, as opposed to, say, poetry or non-fiction?
No idea.

Lots and lots of time: it’s like trying to start an old car in the dead of winter.

One sentence makes two sentences, and each sentence is trying to shape something abstract into something concrete. There is a “click” at the end, like a lock opening, that suggests the piece is done, and whatever you had inside is freed. I think the idea tells you what it needs.

No, I dislike doing readings. I’m too embarrassed to read dialogue out loud, even when published I still usually feel aggressive towards my own sentences, I’m nervous beforehand and exhausted afterwards, I get no sense of fulfillment from the performance, and usually the vibe in the bar is weird with a dozen different forces jostling for different things. Readings in bookstores, or brightly lit spaces I really don't like to do. I realize they’re useful as a social thing to gather around, which I like them for, as an audience member, but even then, hanging out with too many writers for too long istoo much. All I want to do is drink my beer and talk to my friends and if someone reads for longer than 5 minutes I usually want to die. I don’t understand why anyone would want a book read to them in such a weird public setting. It’s irritating that this has become an almost necessary part of the writer’s life—I try to say no to as many as I can, unless I really feel like I won’t be reading to an audience of writer. The pressure is getting to me and I am trying to get better, but I don't really know why. I love interviews and talks though; finding out the way a writer talks, thinks, and moves their hands around is illuminating. Listening to writer's talk about what they think their work is about can be funny.

I think a writer as in novelist has no role in culture at large—when was the last time a writer influenced anything on a seismic level? & I mean their writing, not their brand, or whatever signifier their social media stands for. There’s a personal pleasure from reading a social writer like Zadie Smith and her essays or fiction, but this doesn’t extend beyond my own sense of self, and I don’t see much evidence that that’s the case in the world at large. Books have always been totems of taste, and it seems like the well designed book on a lifestyler blogger's instagram is the last vestige of power remaining. I don't know if I actually believe this.

Writer’s in other senses: journalists, screenwriters, video-game writers, etc., can have social presence and currency. I don't know if they should have a role; we graft a moral seriousness to writers automatically, and I don't know if we should, because it has led us to our current horrific state of affairs. This automatic attachment of moral authority--whether the work justifies it or not--is really bizarre.

Essential and rewarding. All my work has benefited from careful editors. An editor who takes you seriously and knows you’re full of shit simultaneously is a gift. I think an undervalued aspect of editors is how they can create space for you where it didn't exist--without editors like Scaachi at Hazlitt rescuing me from the slush pile, or Shirarose Wilensky who worked diligently on the novel with me, I wouldn't be here. I write terrible pitches, and every editor I've worked with is taking a leap of faith; this collaboration is the backbone of writing. Recently I worked with Madi Haslam & Selena Ross at Maisonneuve after a few years away from non-fic and it's startling to see how much prodding can get me moving in the right direction, or can get my brain going. And I get to keep all the credit--so it's just an excellent situation for me. I've been lucky: I've had mostly considerate editors, a handful of neutral ones, and only one or two where I've had to reject most edits.

I like advice that reminds me to keep my heart open to the world.

10 - How easy has it been for you to move between genres (fiction to essays)? What do you see as the appeal?

I read every day and try to remain open to the world, but beyond that, I don't have one.

I don't think I've ever really felt uninspired. I mean--no one needs this work, so, you know, hanging out is a totally reasonable alternative to writing.

I just bought—without smelling, based on online reviews—a giant, disgusting purple candle that smells like a plaza barbershop. It’s awful but great at wiping out cooking smells. This is in my home.

Visual art is big for me, as mood and tone is very important. Particularly on There Has To Be a Knife, I looked a lot at Francis Bacon’s George Dyer paintings and sat with them as much as I could. He has an intensity of mood that suffused me totally. Also Hurvin Anderson has a bunch of barbershop paintings that stunned me when I saw them and deeply shaped how I worked on the book.

I don’t know if movies inspire my prose, but they certainly guide how I see. The tenderness and rage of Wong Kar Wai, Paul Schrader, and Lee Chang Dong really help me. Lately I’ve been thinking a lot about Andre 3000 and Destroyer’s modern dread trilogy: Kaputt, Ken, and Have We Met. I've been looking at Goya's Disasters of War and The Black Paintings. Some Chinese noir: Diao Yinan, Jia Zhangke.

Harold Pinter and how he corals dread has been a constant in my life for years. Last year I read and re-read some Dostoevsky, and I didn’t realize how funny he was. I’ve taken a lot from Yuri Herrera, Eka Kurniawan, Deborah Levy and Sarah Kane.

This just makes me think of dying.

17 - If you could pick any other occupation to attempt, what would it be? Or, alternately, what do you think you would have ended up doing had you not been a writer?
What a terrifying question.

Spring Snow by Yukio Mishima is completely, totally, astonishing. I was knocked back by the intensity of feeling and the sharpness of prose. Bi Gan’s Long Day’s Journey Into Night is a highlight from last year. Marriage Story & Uncut Gems more recently.