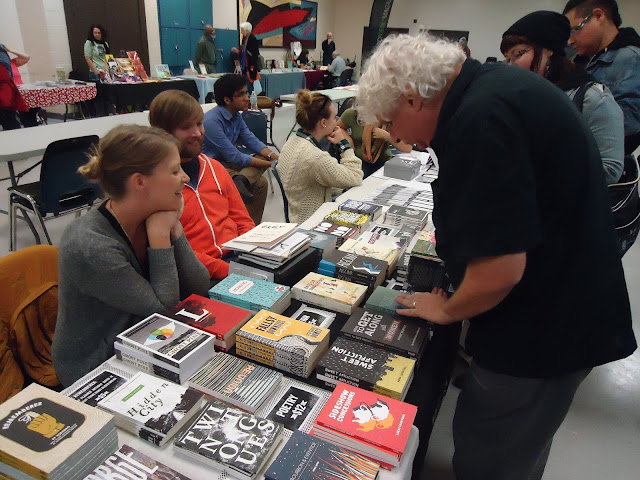 [Stuart Ross digging through recent titles by Invisible Publishing] See part one here and part two here. Oh, I picked up so many amazing things at the most recent ottawa small press book fair (although I seem to have missed a few things, including new publications by In/Words and The Ottawa Arts Review…).

Kemptville ON/Iceland: I’m very pleased to have a copy of Chris Turnbull and a rawlings’ remarkable collaboration, The Great Canadian (2015), produced in a limited edition by Low Frequency. As their web page states:

The Great Canadian is a medium-bending collaborative effort between poet a rawlings and photographer Chris Turnbull. With images from their collaboration for Turnbull’s ongoing, site-specific rout/e project and text from rawlings’ forthcoming echolology, as well as a q-code link to a recording of rawlings reading an excerpt of the text, The Great Canadian represents an intersection of multiple trajectories. The work dances one-sided on and beyond the margins of 23 unbound 7”x7” sheets of translucent vellum, packaged in a letter-pressed brown-bag envelope. 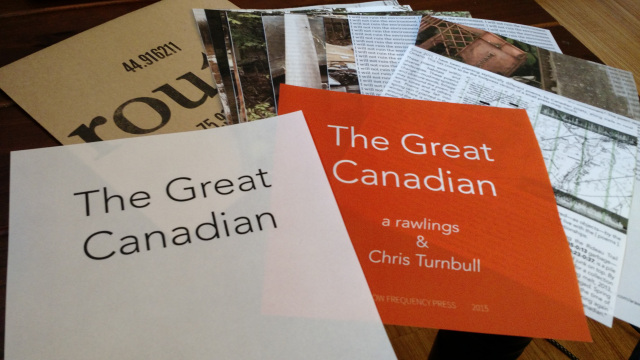 The project is basically the point at which their two separate ongoing projects meet [see my write-up earlier this year on Turnbull’s ongoing project at Jacket2, as well as a link to her brand new poetry title], and the results are quite stunning. Both poets utilize text and image in a deep engagement with ecological concerns, as well as directly engaging with nature. As Turnbull writes as part of the publication:

a rawlings’ echolological poem, “The Great Canadian” was planted in snow along the Rideau Trail (Merrickville, ON Map #13) in 2011. For the first two kilometres, the trail hosts piles of 0:05-0:13 garbage—mattresses, old wood, junk, baby materials, clothing, bottles of the unknown. To the east 0:23-0:37, is a pile of construction materials and household items, to its 0:48, piled mattresses with a variety of junk on top. By 2012, a trail-user had moved [ it ] within a window frame that had become base and frame for the collection of tires, containers, bottles, pieces of wood, and “The 1:53-2:49. An archive. During spring melt, 2013, [ it ] floated in a deep, ATV-created large puddle—the plexiglass muddied, the paper undamaged. Spring 2014—[ it ] was floating again, slippery, so I leaned it in a safe place above the waterline. By the time of autumn 1:00 2014, an unknown trail-user ha re-replaced the poem; the window frame functioning again as base and frame for a collection of tires, containers, bottles, pieces of wood, and “The Great Canadian.”

[ it ] offers a statement subject to its own ruination: “I will not ruin the environment.” The poem degrades over time: in written form, exposed to external conditions, as voiced utterance seeking and losing meaning and context, and as auditory experience, internalized or heard, temporary. a rawlings’ release of “The Great Canadian” for rout/e, the involvement of an unknown caretaker of the poem and trail, and the development and production of a chapbook with Michael Flatt & Low Frequency Press, charts extended, intriguing, and unforeseen collaborations. The chapbook combines an assortment of rawlings’ page-based variants on her initial text (forthcoming in her manuscript-in-progress echolology) with sited visuals of “The Great Canadian.” [ Here ], “The Great Canadian” reforms as a transforming eyed-object predicated upon an unknown series of linguistic relationships and soundings (echolology). The chapbook is archival, the poem is vanishing from the site of the trail, echolology is emergent.

You really need to get a copy of this. In many ways, it has to be seen to be believed.

Ottawa ON: The Sourdough Collaborations: poems and discussion by Roland Prevost and Pearl Pirie (Phafours, 2015) contain exactly what the title describes: a conversation between two Ottawa poets on their collaboration as it is happening, using the poems as examples of what they are working on together. I saw an earlier version not that long ago appear in filling Station magazine and was intrigued, but there is something of the conversation as a whole that is both really interesting, and almost distracting: there is something about the poems that I would like to see on their own, as well, without the conversation about them wrapped around my experience of reading. As they write, “How can we explore recipes for making new?”

if someone is chewing loudly,
eat them to hide the noise.

almost the same as perfume;
how a basket of peaches muffles a room.

watch out for too many keys;
also, for old Portuguese proverbs.

lens caps are accepted in the forest.
silicon earth is a better terrazzo.

anyhow it’s much worse to live in fear.
I know an awe fantasy. one is right here,

so, what are the differences between a cat’s coats?
oh, all that devour our mind’s nimble legs.

The conversation begins around a poem that Pirie composed, and furthers into how she begins by ‘translating’ the poem through various means, to compose a new piece. From that point on, Prevost takes Pirie’s response, and works his own variation on ‘translation,’ which leads Pirie to respond to Roland’s response, and so on (including a collaborative translation), until fourteen poems in total are created. They run the poem through online translations, working small edits as they go. Over the past decade or more, both Ottawa poets Pirie and Prevost have been engaged in conversations and writing-as-study on poetic language, structure and possibility, so to see them in conversation with each other on collaboration seems a logical step in their ongoing processes.

Prevost on the process of making poem 9: After many wild permutations, it seemed appropriate to imitate a less wild poem, while at the same time, keeping to the subversive premises of our play.

Over the longer view of the series, there’s a sound shift across poems. As you’ll see scope becomes scape. It later became nodding onion as we go across slant rhyme and slant meaning. It tantalizes in the attempt to ‘signify’ something grander, but it’s just play on the previous text, with more like the spirit of a telescope haunting the piece like a ghost. If you peg down a single thought and wrap everything around it, an odd kind of focus ensues. For ironic fun, the pegged idea here is the fog of distance.

There was a pause of a few months. How to find the rhythm again? Pirie ran Langues Imaginaires thru Dutch then did a naïve homophonic translation to English. A story was mixed in (of rigidity vs blue ocean, blue ocean) because story is more memorable than randomness.

Part of what intrigues about this publication is in seeing the nuts and bolts of how the two of them worked the collaboration, and seeing how, through the very nature of producing the publication the way that they have, the process of this particular collaboration is more important to either of them than the finished product. I mean, the results of their work is almost pushed aside, not allowed to be experienced on its own terms. It does make me curious to see if this is simply one of what might be a series of collaborations they end up working on together over the next few months or years. As fascinating and engaging as seeing their process is, I want to be able to read the result without having to know everything about how they got there; at least, not until later.