Ms. Fitzgerald died suddenly, but peacefully, at her Northern Ontario home on Wednesday, November 25, 2015 in her 64th year. Cremation has taken place. A Celebration of her Life will be announced at a later date. Judith Fitzgerald was the author of twenty-plus collections of poetry and three best-selling volumes of creative non-fiction. Her work was nominated and short-listed for the Governor General's Award, the Pat Lowther Award, a Writers' Choice Award, and the Trillium Award. Impeccable Regret was launched this year at BookFest Windsor to critical acclaim. Judith also wrote columns for the Globe and Mail and the Toronto Star, among others.  "Her work is incredible...entirely inventive, deeply moving, and universally attractive." – Leonard Cohen. For further information, to make a donation, order flowers or leave a message of condolence or tribute please go to www.paulfuneralhome.ca or call Paul Funeral Home, Powassan, ON (705) 724-2024. 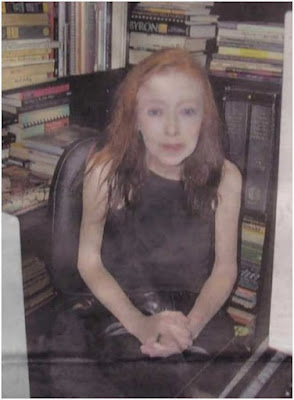 As I wrote in my recent review of her Impeccable Regret (Vancouver BC: Talonbooks, 2015): “The author of some two dozen poetry titles going back more than forty years, from Octave (1970) to the most recent “Adagios Quartet” – published through Oberon Press as Iphigenia’s Song, vol. 1 (2003), Orestes’ Lament, vol. 2 (2004), Electra’s Benison, vol. 3 (2006) and O, Clytaemnestra!, vol. 4 (2007) – Fitzgerald, through multiple award nominations and her ongoing critical work, has been a consistent force in Canadian writing for decades. She has also produced some of my favourite poetry overall; her Lacerating Heartwood (Toronto ON: Coach House Books, 1977) remains one of my most reread poetry collections.”

Judith Fitzgerald was one of my favourite Canadian poets, as well as being one of my earliest and most passionate supporters, and both she and her work were very important to me in my twenties [see the piece I wrote here about a decade ago on one of her poems from Lacerating Heartwood]. We even brought her to town to read at TREE (as she claimed, her “second last public reading”) on April 9, 1996, and produced, through above/ground press, her chapbook 26 WAYS OF THIS WORLD: A Variation of Ghazals. Part of a longer work-in-progress, D’Arc and de Rais, about Joan of Arc and Gilles de Rais, I was always slightly disappointed she abandoned that title for the final publication, appearing as 26 Ways Of This World (Ottawa ON: Oberon Press, 1999). We kept an occasional correspondence that was furiously active between extended silences. She was good enough to even occasionally send poems for some of my schemes, including my Canadian issue of dusie. An email two weeks ago after my review of her Talonbooks was the first I’d heard from her in a few years.

As a poet, critic and person in the world, she was passionate, brilliant, forceful and sometimes difficult. I shall miss her.
Posted by rob mclennan at 8:31 AM
Labels: Judith Fitzgerald, obituary