From Vancouver poets and pop culture aficionados Dina Del Bucchia and Daniel Zomparelli come the wonderfully playful and dark poetry collaboration Rom Com (Vancouver BC: Talonbooks, 2015). Del Bucchia, the author of Coping with Emotions and Otters (Talonbooks, 2013) and Blind Items (Toronto ON: Insomniac Press, 2014), and Zomparelli, author of Davie Street Translations (Talonbooks, 2012) [see my review of such here], also co-host the literary podcast Can’t Lit. Composed as a book “that both celebrates and capsizes the romantic comedy,” the poems in Rom Com are darkly comic, responding to a series of pop culture idioms, porn parodies, pop quizzes, actors and romantic comidies themselves (with repeated references to weddings, dicks and sex scenes), including poems titled “She’s All That,” “In a Movie about Weddings / No One Wants to Attend,” “When Harry Met Sally,” “Because You Watched 27 Dresses,” “Overboard” and “He Grasps at Emotion, or The Proposal.”

You sang me a song
but I forgot.

You took me to the aquarium.
I forgot.

Took me on a boat.
Forgot.

I keep watching The Sixth Sense,
over and over again, waiting for the twist.

who tells me I love him
on a VHS

but I can’t remember.
Now the ocean surrounds me

and I never trusted
the open water. 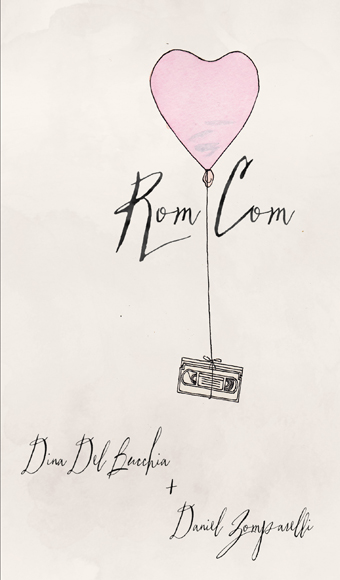 Given their exploration into pop culture, humour and the sonnet, it would be impossible to think that the two haven’t been influenced by the work of Montreal poet David McGimpsey, author of his self-described “chubby sonnets,” especially through their five-poem “Sonnets for Supporting Roles,” that includes:

For you, not for you, but for porcelain dolls
walking down the aisle. You are a cellphone
or an emergency lip gloss. You are the touch-up
rouge in her purse, you are the gay best friend.

The one who fusses over her hair, memorizes wardrobe,
waits in your apartment for whenever she is ready.
Filing nails, and sitting on your Barcelona chair,
watching Murder, She Wrote until she calls.

When she is ready, you snap fingers and make
jokes with flapping hands, tell her she has it all.
When she needed you most, you flew down
to save a dance at the wedding, a wedding you

could never have, legally, so instead you collapsed
back into a lipstick and a clasp purse.

They might be influenced by McGimpsey, but the poems here are far darker than his, and even their own individual works, writing out a sense of emptiness and loss behind so many of these poems composed for and after a series of light American movie fare, such as in the poem “So I Married a Poet,” that includes: “There was a time when romantic comedies were like jokes / about men versus women. They were everywhere.” One of my favourite poems in the collection has to be “A Series of Romantic Comedies / That Could Never Be Made,” dedicated to Winnipeg poet Jonathan Ball, that begins: “A woman dates every man on earth until she is too old to date. On her deathbed, she meets the man of her dreams: the doctor who pulls her off life support. “Ironic” by Alanis Morissette plays during the credits.” The poem ends with:

Kate and Steven never meet. They spend their entire lives just missing each other. One leaves a coffee shop just as another enters, one works the day shift, one works the night shift. They would fall in love if their paths ever crossed, but they never do. Love inhabits the spaces they never meet. It fills the blank spots.

This is an enormously smart and witty collection, playing with stereotypes and a love of bad film. And yet, are Del Bucchia and Zomparelli celebrating the genre or pulling away the curtain, and revealing its inherent shallowness? The answer, I think, is, somehow, incredibly, both.