The word is a verb
but the word
is a noun

I am my wife’s wife.
I wive. I wave the news at a beetle
who must die.

It runs into and out of
this house
of mine. (“RUN”) 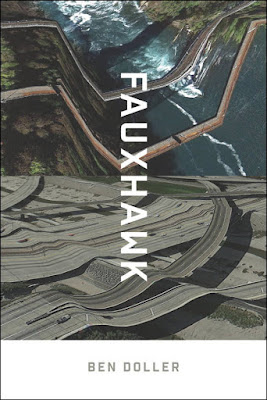 San Diego poet Ben Doller’s latest poetry title is FAUXHAWK (Middletown CT: Wesleyan University Press, 2015). The author of the poetry collections Dead Ahead (Louisiana State University Press, 2001), FAQ (Boise ID: Ahsahta Press, 2009) and Radio, Radio (Albany NY: Fence Books, 2010), as well as two collaborations, the poems in FAUXHAWK utilize an energized, and nearly manic, sense of play through erasure, repetition, exaltation, the footnote, lyric fragment and collage, as well as some of the most lively and gymnastic turns I’ve seen in a very long time. The collection is constructed with an opening, seemingly self-titled section of shorter poems before moving into shorter poem-sections: “Earing,” “Hello,” “Pain” and “Google Drive.” Part of what appeals about this collection is seeing the ways in which Doller is, with such a lively glee and a fierce intelligence, stretching out the boundaries of his own poetic, from the staccato-accumulations of a poem such as “[BEE]” (“I background my ground. / I backlist my list. // I backtalk my talk. / I backwash my wash.”), the erasure/excisions of the poem-section “PAIN”(“Consider thee carefully / what thou taketh for pain”), to underscoring the overwhelming footnotes of the poem “HELLO,” a short lyric poem awash with forty-six different footnotes, the first of which reads:

The poem, “[BEE],” also, becomes a poem that, rhythmically, would be quite wonderful to hear aloud, and the sounds and rhythms that run through the breaks and collisions of Doller’s poems are quite striking. In FAUXHAWK, Doller articulates and explores the difficulties with language, and how language is so often misued and misappropriated, in an exacting and glorious music, and creating a fine and precise tension between drudgery and song. As he writes to open the poem “DUMMY”:

Isn’t it dumb
to write a

letter
at a time.

“On Google Drive,” he writes, in the sequence/section “Google Drive,” “the eucalyptus trees / sing Philip Levine // behind the Korean / bakesales.” The sequence/section plays off of a form of poetic translation, opening with a quote by American poet Fanny Howe, who is referenced throughout the sequence: “I’m rewriting Fanny’s book probably a gift for a friend / Or from her file I stole it from the faculty lounge.” The sequence reads as a curious blend of possible translation and poetic response to Howe’s poetry, from the cadence to the ghazal-like fragments and connections between them, and his coy references to the strong undercurrent of Catholic faith that runs throughout her poetry. “Unlike myself,” he writes, “you are immune to cliché. / Yours is faith to write what you say // myself, I can’t always tell when I’m joking / and I pop out of bed plotting paths to get loaded.”

In the notes at the end of the collection, Doller informs that “‘Google Drive’ is a word-by-word writing-through of Fanny Howe’s ‘Robeson Street,’ from the book of the same title, published in 1985 by Alice James Books. The line ‘Schizophrenia is hearing voices, not doing them’ belongs to the comedian Maria Bamford.” Still, each referenced link to Howe’s writing throughout the sequence reads as both link and deflection, which could easily be a matter of Dollar utilizing Howe’s language, but not necessarily similar intentions, somehow allowing him opportunities to slip his own poem underneath the structure of what is a variation upon hers:

The weather so soft I go vegan for the challenge
Hunger as an element, not hunger,
inconvenience as continuous present

You just know the daughters
Skyjacked the text

Paradise Lost, if these wars are my Vietnam
Oh Fanny I’ve barely watched
So no thanks
Hold the onions, shouldn’t you be on strike
You’ve been working since you made me my grassjuice