Victoria Vernell lives; loves; and waits for the Doctor in the suburbs of Ottawa, Ontario. She is a decaffeinated mother of three teenagers and doesn’t go downtown nearly often enough for a cup of Bridgehead. Two cats keep her mindful of her position on the food chain, and two large dogs guarantee that a house is not a home without small piles of randomly shed fur about the place.

A writer from an early age, Victoria has published poetry in small press publications including Quills (2008), and Jones Av. (1996). There’s a poetry manuscript or two that needs completion, but in the meantime you can read her nonfiction work at her two blogs Taking The Mother Road and Whovian On A Budget. 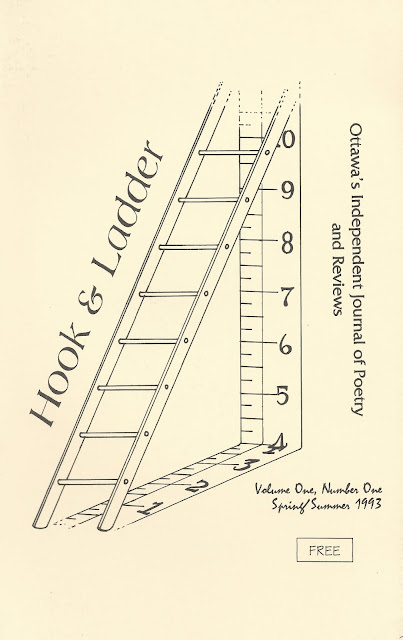 Q: How did Hook & Ladder first start? I know there were at least a couple of you that had emerged from a creative writing workshop with Seymour Mayne at the University of Ottawa (the same class, I believe, that prompted b stephen harding and Maria Scala to found graffito:the poetry poster). What was it that prompted the creation of a new journal?

A: Ah, yes. We were young and full of gumption. Looking back, we were aware of Arc and its ties to Carleton University, Ottawa U had Bywords, and your above/ground press had just begun producing broadsheets, etc. For myself, since I can’t speak for my co-editors at the time - Robin Hannah and Alexander Monker, who were also part of Seymour Mayne’s poetry workshop that year - I wanted something that transcended existing literary cliques and made local poets of all levels of experience feel encouraged to submit their work for publication.

Q: What were your models when starting out? Were you basing the journal on anything specific, or working more intuitively?

A: I liked the look of Arc. A mini book you could carry around with you and fit into a purse or backpack.

I guess in its way we were of the “no school like the Old School” mindset as far as design. I had a copy of Aldus (? – later Adobe) PageMaker installed on my parents’ computer and I was a high-level font collector, and taught myself how to do the layout.

As for the selection process, we all tended to favour a similar style of writing. We weren’t looking to reinvent the wheel and were always mindful that people were giving us their money to do this, either through direct sales or subscriptions, so we wanted to give them a quality product on every level, within our collective ability to provide it.

Q: What was the process of putting together those first few issues? Did you have an open call for submissions, or were you soliciting work?

A: When H&L started, we intentionally kept our net cast within Ottawa and Eastern Ontario. We didn’t have the budget or the distribution network to take it much further, as it didn’t receive government arts funding until years later, from the City of Ottawa; and we felt that between the two universities plus the literary reading series (Tree, Sasquatch, BARD, Vanilla/Vogon, to name a few) we would have a strong pool from which to solicit submissions. I was also a full-time undergraduate student studying English Lit at Ottawa U, so I was able to get us a mail slot in the English Department as an address, which may have helped with cachet. That was the extent of the university’s concrete support of the magazine.

I was adamant that my name would only appear in H&L as a byline on book reviews. I sent out letters to small presses across the country requesting review copies. Most were pleased to oblige.

As for the selection process, whoever was on the editorial board at the time would get together as a group and go through the submissions one by one. Eventually we worked up the nerve to send poems back to their originators with comments. Payment was two contributor copies. 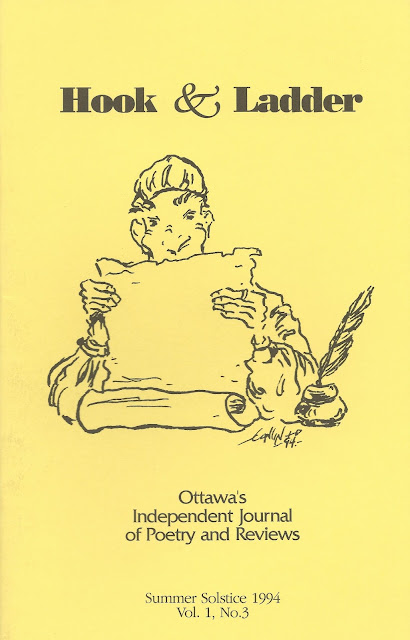 Q: Why were you, as you say, adamant your name only appear as a byline?

A: Good question. I was unable to see the value in my own work. I could not be objective and impartial and make that distinction between myself and my poetry.

It was less demanding to find the merit in others’ work because I had no personal investment in it.

Q: Did this change at all over time? What effect, if any, had Hook & Ladder on the way you saw your own writing?

A: Yes, it did. It bears mentioning that depression and anxiety and every dark corner those two mental illnesses encase all but silenced me for approximately 12 years, during which time I also got married and had three children with complex medical issues; and I eventually got divorced. I didn’t start writing again until 2006, and went to some workshops. The last time I read in public was in 2007.

I was lucky also to meet someone who was very supportive of my writing and keeps poking at me to do more. These days my output is mostly online with two non-literary blogs, but I have never lost a love for books and printed zines and I want to concentrate more on the literary form that ignited H&L’s creation 22 years ago.

Q: What kind of reception did the journal have, whether in Ottawa or beyond?

A: I would say the response was positive, overall. We had our critics of course but our decision to stop publishing after a five year run had nothing to do with that. My children became my focus and I built my life around them, as the song goes. But when H&L was active we all strongly believed in what we were doing and it was a great learning experience on many levels.

Q: What prompted the decision to finally suspend publication? Was it simply a matter of shifting priorities?

A: Babies and bills. And back then due to undiagnosed depression and anxiety I was a lousy juggler, worse still at asking for help, and expert in pushing people away – usually people I cared about. After I came to terms with those things, I was of the mindset that I had to give 100% of everything to motherhood, so I did what I thought was best for the sake of my domestic life at the time. It isn’t coincidence that I began writing again and pursuing publication after my divorce. 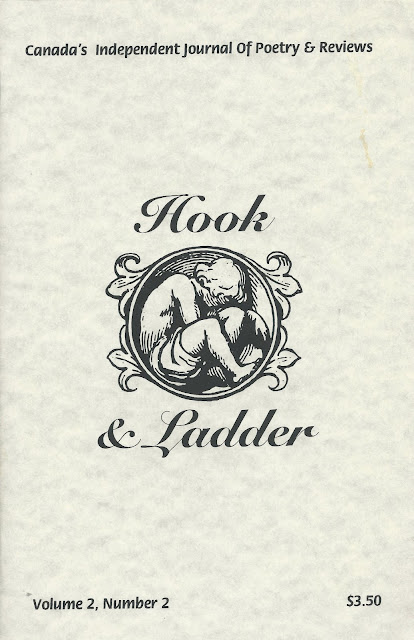 Q: You mention Alexander Monker and Robin Hannah as co-founders/co-editors. Was the collaboration between the three of you an equal partnership, and were they both there during the entire run of the journal? How were either of them involved in the decision to suspend publication?

A: Robin, Alexander, and I were the team behind most of the first issue of H&L. Alexander was dropped from the masthead prior to the launch of the first issue, to paraphrase the late Irving Layton, because Robin and I jointly decided that Alexander’s devotion to the project wasn’t perfect. Difficult to pin down for meetings, etc. I remember Robin’s partner at the time, Sean O’Neil, came on board and helped with content selection.

It was Robin and I who put out the second issue. My university classmate Kim McNeill joined us for the third issue, and I believe it was around that time that Robin and I severed ties and she eventually moved back to Toronto.

If we are going to talk about personal or professional regrets, my biggest was losing her. She was (is) an amazing writer and knew her stuff. To the best of my awareness she published her chapbook with above/ground press and a collection with Broken Jaw Press and nothing since.

At the time H&L ceased publication, I was also building a reading series and a chapbook press under the name Electric Garden. Kim had moved on, and my ex-husband briefly joined creative forces with me, which was not without its negative consequences.

As I said previously, it was a valuable learning experience on many levels. The fallout is not something I wish to revisit.

Q: Looking back on the journal now, how successful do you feel you were in your original goals? What do you feel were the biggest accomplishments of Hook & Ladder?

A: At its peak, it was great fun. I still get a great chuckle from the memory of you, Warren Dean Fulton, and I, sandwiched in the back of my parents’ minivan with our boxes of publications, heading down to Toronto at some ungodly early hour to attend CanZine at the Spadina Hotel. Do you still have that coffee cup from the Denny’s in Kingston?

I think H&L achieved what it set out to do. I tip my hat to the people who are still in the game. For me there will always be something about the printed zine that is timeless and needs to continue. 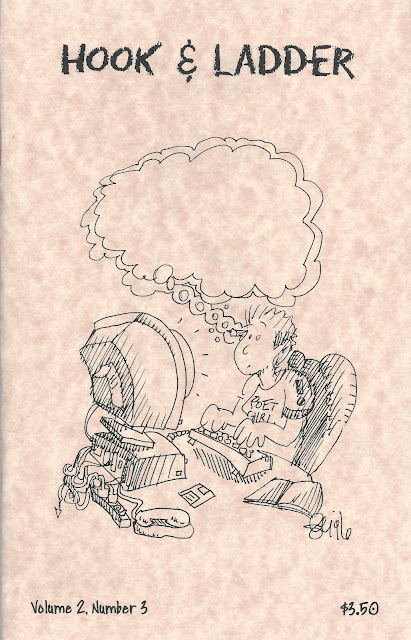 I remember it well -- and still have a few issues on my bookshelf.