Impersonation doesn’t mean what you think. This is the introduction to this book, my introduction, my lyrical sexology. Lyric Sexology. This is one of the things you need to get straight. This is another, you there in your later age, your so-called 21st century: I am not a transsexual. Or an intersexual, or a hermaphrodite. (Hermaphrorditus can write her own damn book.) I am not any of those things you have words for now. You don’t have words for what I am. What I was was this:
I was a dude.
Then I was a chick.
Then I was a dude again.
Hah. You didn’t think we said “dude” or “chick” in what you call ancient Greece, Hellas of the Hellenes, etc. Think again.
Here is what you don’t have words for: What is a seer? What is beyond knowing? How can I write you now, a now impossibly out of joint with your own, knowing you will read this? Knowing you? Or what is a sex in time? Without?
You do not have a word for snakes or gods or sexes. You only think you do.
You do not have a word for the meeting of snake sex god in one word’s divided knowing, a knowing one divided word.

Seven years is what I was as beyond, a beyond, and inside too. So, impersonation doesn’t begin to describe it, but suppose it did. Suppose
I began to describe you. (“Tiresias, impersonated.”) 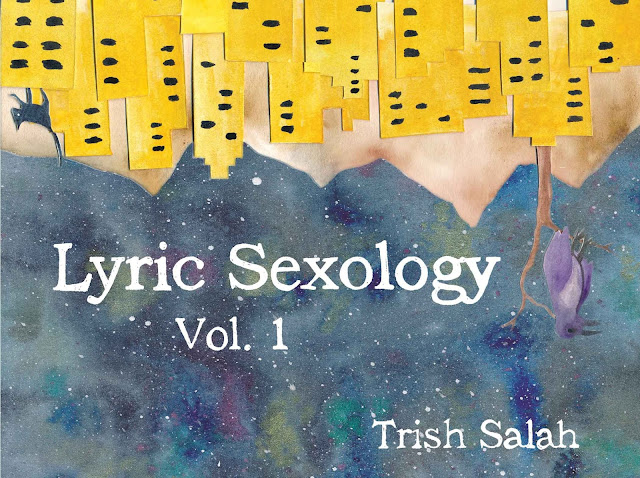 I’ve long been curious about the work of Kingston poet, fiction writer and critic Trish Salah, a name I first heard during those early 1990s Montreal days of Corey Frost and Colin Christie’s ga press. Salah’s latest release is Lyric Sexology Vol. 1 (Montreal QC: Metonymy Press, 2017), the first Canadian edition of a title originally published in 2014 by New York publisher Roof Books. The author of a previous title – Wanting in Arabic (TSAR, 2002; 2013) – Salah’s Lyric Sexology Vol. 1 suggests the opening salvo of what will continue, at least to a second volume, if not further. There are elements here that read as memoir, something she plays with as she writes through the legendary Greek character Tiresias, and one can make a rather obvious comparison to Anne Carson writing the Ancient Greek figure Griffin in her Autobiography of Red (Knopf, 1998). In Lyric Sexology Vol. 1, Salah composes her own blend of book-length lyric essay and long poem on metamorphosis, gender and expectation, and one that includes references to Ovid, Glee, Ed Wood, Atlantis, high heels, mythologies, National Geographic, Gail Scott’s Heroine and the October Crisis.

Salah’s essay-poem Lyric Sexology Vol. 1 is an ambitious work that combines the lyric with the narrative, writing out poems that wind their individual ways around and through each other; writing out, even beyond gender, the potential elusiveness of identity itself. Through the voice and character of Tiresias, “a blind prophet of Apollo in Thebes, famous for clairvoyance and for being transformed into a woman for seven years.” (Wikipedia), a character mentioned in numerous works by Sophocles, Euripides, Pindar, and Ovid, Salah is able to explore and articulate an identity that was never fixed, but one that evolved as Tiresias did, and as his/her own situations required. As Salah writes in the poem “Godtears”: “Her break with form was primarily intelligible as wanting the impropriety of your hand / in me, sous la table, the exquisite corpse giving way to hewn simply exercises / (spoonerisms) in French or Greek.” In an interview conducted for CWILA: Canadian Women in the Literary Arts by Morgan M Page/Odofemi, Salah writes:

Viviane Namaste talks about the autobiographical imperative, arguing that when non-trans folks approach trans people, not only are they only interested in hearing our autobiographies, but they feel free to discount everything we might have to say that isn’t about autobiography. And on CBC this morning, Janet Mock remarked that the media’s treatment of trans people hasn’t changed significantly since the early 1950s press coverage of Christine Jorgenson. Mock framed her own memoir and media interventions as attempts to push back against the narrowness and othering that has come of treating trans people as if we are solely defined by our transness (as opposed to other aspects of our identities, histories, experience, expertise and interests), and also as if we are curiosities to be known about as opposed to being people one might engage with.  This relates to a point Julia Serano and Talia Bettcher make, that cis folks feel entitled to especially scrutinize and doubt trans folks’ self representations, positioning us paradigmatically as imposters or deceivers. In autobiography we appear as singular beings, at best as exceptional individuals who have triumphed over adversity to actualize ourselves, but more often as curiosities, outliers among humankind, who confirm the normalcy of the non-trans reader.

All that said, yes, it is a problem that there has not been either a critical apparatus or a broader public for our creative work, and that is tied in some ways to Viviane’s critique of the idea that the only or primary reason we might possibly have for writing is to satisfy the curiosity of, and/or educate, a non-trans public.

In a review of the prior edition at Tripwire, Zoe Tuck opens: “Trans women poets: raise your hands if you have written poems about or in the voice of Tiresias? Although I’m not sure if there are enough trans poets AND trans poets who have written Tiresias poems to call them a commonplace, I will cop to having written a few. The figure of Tiresias looms over the search for precedent.” Tuck continues:

The wit masks a real concern that has dogged transgender history and queer history before it: who can we claim, either in the past, or across cultural boundaries, as being  one of us? Put another way: is there a universal category of gender?

Through writing a whole volume through and around Tiresias, Salah is able to write out beyond the purely physical, and beyond the initial, and somewhat expected, poems that Tuck suggests have already been composed; by composing nearly two hundred pages of this first volume of Lyric Sexology, Salah manages to write through Tiresias, as well as utilize the legendary Greek figure, as a way to explore the very nature of fluidity, concerning gender, sexuality and the core root of self, bringing in all the cultural expectation, uncertainty and complications that come along with such shifting.

The simplest equations are subtraction.
A “dog never loses its savour.” Arab slavers.

Fawn smear from the mouth, eye sockets
Tell me about your history, the one to come. (“Tiresias as Cuir (on the run)”)