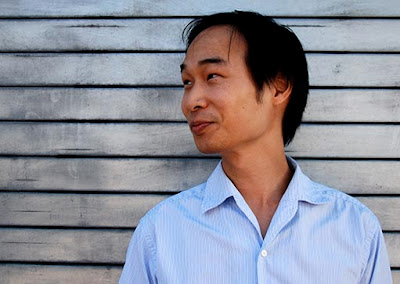 Tung-Hui Hu is the author of three books of poetry, The Book of Motion (2003), Mine (2007), and Greenhouses, Lighthouses (Copper Canyon Press, 2013), a chapbook, On the Kepel Fruit (Albion Press, 2017), and a study of digital culture, A Prehistory of the Cloud (MIT Press, 2015). He has received awards from Yaddo, MacDowell Colony, the NEA, and the San Francisco Foundation, and his poems have appeared in places such as Boston Review, Ploughshares, the Academy of American Poets’s Poem-a-Day, and the anthology Family Resemblance: An Anthology and Exploration of Hybrid Literary Genres. Hu teaches poetry and digital studies at the University of Michigan, where he is an assistant professor of English.

1 - How did your first book change your life? How does your most recent work compare to your previous? How does it feel different?
The year my first book came out I moved back to California and entered a graduate program in architecture. At the time, and for a few years afterwards, that book felt more like the end of something, rather than the beginning of, say, a literary career. Now that empty feeling has lessened a bit, but it wasn’t until the difficult birth of my second book that I began to feel my life had changed. My most recent work is more prosaic and less dressed up in finer language; I’m happier to say what I really mean to say.

2 - How did you come to poetry first, as opposed to, say, fiction or non-fiction?
Besides the appeal of its brevity, I was working a summer job down the street from the Jack Kerouac School of Disembodied Poetics in Boulder, Colorado, and decided to try a course. I didn’t fit in at all. The poets translated from other languages; were older; had pain, etc. – nothing I had experienced yet, being still a teenager. I was fascinated by my fellow students and instructors, flattered that I could possibly be considered one of ‘them,’ and wanted to do it, too.

3 - How long does it take to start any particular writing project? Does your writing initially come quickly, or is it a slow process? Do first drafts appear looking close to their final shape, or does your work come out of copious notes?
Usually I have an object I want to write about, but not the angle. And I always imagine everyone else has thought of the object and been struck by how poetic it is. That full eclipse that just happened in the US, for example; so many terrible poems, and probably a few good ones, will be written about it. So it takes a long time for my writing to mutate into something strange enough that I won’t be embarrassed by my starting point.

4 - Where does a poem usually begin for you? Are you an author of short pieces that end up combining into a larger project, or are you working on a "book" from the very beginning?
There are big, abstract questions that keep floating about my head – about how we write about empire, about the invisible, about capital. And there are also stories that I come across from reading other books, the news, etc. – for instance, about the rarest pasta on earth, or a 17th-century beached whale. The poem often comes out of trying to figure out how to combine those two extremes. As for your question about scale, I often begin by imagining everything as part of a “book”, even if that book is entirely fictitious. It takes the pressure off making each line perfect.

5 - Are public readings part of or counter to your creative process? Are you the sort of writer who enjoys doing readings?
Readings feel like the reward for writing – the part where we can all just be witty rather than dour, which is my on-page personality. People who come up to me and tell me what lines they remember or enjoy, or other books to read, are helpful to my process, too. I won’t always remember what I was thinking when I wrote a poem, but I’ll always remember the times I’ve been heckled by the audience or, occasionally, the organizer.

6 - Do you have any theoretical concerns behind your writing? What kinds of questions are you trying to answer with your work? What do you even think the current questions are?
I’m currently working on an academic book about lethargy, so the questions on my mind are about passivity and how we negotiate political (in)action within the constraints of capitalism. Because I was asked to give a few talks on the environment, I’m also thinking about nonhuman agency, and as a result, I have some new poems written from the time and perspective of mushrooms and mayflies.

7 – What do you see the current role of the writer being in larger culture? Does s/he even have one? What do you think the role of the writer should be?
Most of my colleagues and friends are (correctly and necessarily) outspoken about the political role of writing and about writing’s ability to intervene in culture. For me, though, I’m a reticent writer; that’s my personality. Writing shouldn’t need to do anything; it shouldn’t have to justify itself. The doesn’t-do-anything part of writing is, for me, an antidote to a neoliberal world that’s hellbent on making everything productive.

8 - Do you find the process of working with an outside editor difficult or essential (or both)?
I’ve worked most closely with an outside editor on my nonfiction book A Prehistory of the Cloud, and found it absolutely essential. Ben called bullshit on a lot of my rhetorical flourishes—those tricks to disguise the moments I didn’t have a clear idea of what I was saying. And he helped me think about the architecture of my story, rather than jump from idea to idea.

9 - What is the best piece of advice you've heard (not necessarily given to you directly)?
Never ever bad mouth your colleagues.

10 - How easy has it been for you to move between genres (poetry to critical/academic prose)? What do you see as the appeal?
It’s gone a bit better than I expected; it was made easier by discovering how many other poets have made that transition, such as Lewis Hyde. The appeal of critical prose for me has been that it’s a chance to provoke, to change how people think about a subject by wrenching the steering wheel away from the previous ways of doing things. The tough part has been keeping a consistent tone, since, as a poet, I obviously like experimenting with the craft of writing. Nobody will ever notice, but there’s a really deft jump-cut between two ideas in A Prehistory of the Cloud. That’s the stuff I’m secretly proudest of.

11 - What kind of writing routine do you tend to keep, or do you even have one? How does a typical day (for you) begin?
I only get to write poetry for about a month, maybe a month and a half, each year. So most of that time is spent trying to figure out what I was trying to do the previous year—what I was doing with line; what experiments or ideas had stalled. A typical day begins with a bagel and cream cheese, reading over my drafts from the previous day and whatever book is on my desk, and writing down what ideas I want to try working on for the day.

12 - When your writing gets stalled, where do you turn or return for (for lack of a better word) inspiration?
I guess I go for a walk? That, and returning to an Asian American sense of shame that I’m wasting someone’s time/money by not writing?

13 - What fragrance reminds you of home?
Salt water and laundry exhaust, and if I’m really being honest, a bit of urine, too.

14 - David W. McFadden once said that books come from books, but are there any other forms that influence your work, whether nature, music, science or visual art?
Mostly visual art. I’m currently obsessed with Candice Breitz’s “Love Story”, a multi-channel installation with Alec Baldwin and Julianne Moore performing a script based on interviews Breitz did with six refugees from Syria, Angola, India, Venezuela, Somalia, and the DR Congo. It uses Hollywood stars to expertly dismantle the Hollywood star system and the white savior myth.

15 - What other writers or writings are important for your work, or simply your life outside of your work?
C.D. Wright, Cornelius Eady, Kimiko Hahn, off the top of my head, to name some of my “elders” that continue to influence me.

16 - What would you like to do that you haven't yet done?
I’d like to live on a canal boat (narrowboat).

17 - If you could pick any other occupation to attempt, what would it be? Or, alternately, what do you think you would have ended up doing had you not been a writer?
I had a very brief taste of working as a political consultant, and I might like to pursue that career at some point – I like the strategizing and the details (some might say minutiae) of the game, and of course the stakes feel very high right now. I also just learned about the foreign service exam; I did reasonably well on a practice test, and that seems like it would have been a better way of spending my 20s/30s.

18 - What made you write, as opposed to doing something else?
Perhaps that I’m a slow thinker, and appreciate the length of time that one can take between books – no editor or publisher will ever be pounding the table, demanding my next book of poetry.  Not producing on deadline seems very rare to me, and precious. (I realize this contradicts the career choices I listed above.)

19 - What was the last great book you read? What was the last great film?
This isn’t exactly right, but the two films that spring to mind from last summer, when I had some time to watch films for leisure, were Jane Gillooly’s Suitcase of Love and Shame and Deborah Stratman’s In Order Not To Be Here. As for the last book, Anna Tsing’s The Mushroom at the End of the World: On the Possibility of Life in Capitalist Ruins.

20 - What are you currently working on?
A paper about how we feel infrastructure for a few upcoming conferences and workshops. Also, learning to be less impatient.