Dear asshole, I’m writing you
from the fifth hour of a barbeque.

J. has set up a table for flip-cup;
we are celebrating labor.

Everyone misses you.
Everyone has a burger.

I saw today another hurricane’s
coming toward you:

Some networks represent it with a moving point,
others as a black eye covering the Yucatan.

This party is as wild
as a jeep driving down stairs. (“A Few Letters”)

I was quite taken with South Carolina poet and editor Liz Countryman’s first full-length collection, A Forest Almost (Boulder CO: Subito Press, 2017), one of the few books I’ve read in some time that has caused me to jolt, and go back, rereading what had struck in such unexpected ways [she is a poet I apparently noticed back in 2012, thanks to HANDSOME journal; see my review of such here]. I like the mix of structures in this collection, but the poems stretched down the page, constructed with short phrases, rhythm and space, are the ones that stopped me dead in my tracks, whether “A Few Letters” or “When I Excise,” that begins:

Thin remains
a needleless pine
when I strike
your chunk

and donated.
What’s left
bare as a beach
with its lone

struggling shrimp
face just
out of the sand
blessedly still in movement. 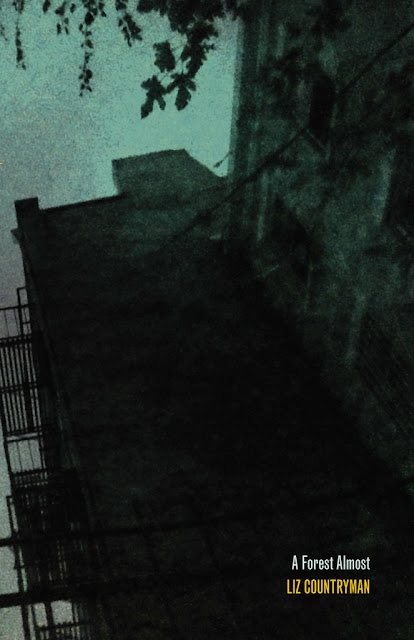 Selected by Graham Foust as the winner of the 2016 Subito Press Poetry Prize, there is a confidence to the poems in A Forest Almost, one that doesn’t feel as much like a first book, suggesting her apprenticeship was entirely off-camera, and not included in the boundary of this collection; or perhaps, she is simply that good, able to produce a book with such confidence and strength, but without one that needs to announce itself. Moving between meditation and observation, these short essay-poems are breathtakingly, concurrently, intimate and objective, articulating such a clarity and precision to get even indirectly to the point. As she writes in the poem “Fireworks Phobia Formation”:

I am an attempt to be clear
while burning out
something almost said the incorrect way.