Gregory Betts, This Is Importance: A Student’s Guide to Literature

This book is a heaped pile of mistakes! A small pyramid of its own, this book of student mistakes is, then, a document attesting to the personal growth of the thousands of students I have had the wonderful opportunity to teach. One thing that Lucretius missed in his theory of the importance of the error, though, despite all of his genius, was the importance of humour in the process. In my classes, I often start by telling the students that they might come to their education with the faith that they are transforming themselves, which requires killing off part of who they were before. Such intimate change is painful, awkward and often clumsy, and I am there to help them discover their new selves with some measure of – if not grace – then support. Of course, all the while they are learning and unlearning themselves, I am learning and unlearning myself alongside them. So, I am also there to help them see the humour in the process. We do laugh a lot in class: sometimes at my mistakes (for, as all opposites attract too many cooks with rough diamonds in the busy, I take too much pleasure in mixing metaphors and twisting aphorisms, and often get carried away), sometimes at their mistakes (though never singled out as such; humiliation is simply not the point of the game). I have come to learn that laughter and a good sense of humour are essential tools in learning. You fall, you laugh it off and you try again. And then when the video appears on Youtube, you laugh at the slapstick spectacle and grow more resolved to get it right. You can’t laugh if you don’t see what you did wrong; and you can’t really see what you did wrong unless you can laugh at the difference.

Collection as a series of mistakes and errors done by his students, St. Catharine’s,Ontario writer, critic and professor Gregory Betts’ newest title is This Is Importance: A Student’s Guide to Literature (Hamilton ON: Wolsak & Wynn/Poplar Press, 2013). Anyone who has corrected student papers will easily appreciate this book of odd lines, misunderstood queries and just plain wrong-headedness that run through this small book, all lifted from years worth of student papers. I’ve long been a fan of the mistake and the accident, knowing just how important such are for the creation of new work, and the possibility for the shifted perspective. There are destinations that can only be reached by mistake, and Betts seems to understand this, discussing humour, mistakes and their importance in his lengthy introduction. To see something different, one must sometimes put words and concepts side-by-side that have no business being there, and some of these small slips may be hilariously funny and ridiculous, while others have the sheen of accidental near-genius, shifting the way a particular writer or work might be considered (one of my favourite, on Toronto writer George Elliott Clarke, reads: “Clarke is an Afraidian author.”) Others make absolutely no sense at all. Here is a small selection of such:

Krapp’s Last Tape has to go to the bathroom but can’t. The banana is something to hold on to. (“Samuel Beckett”)

Cohen sits at a bar, revealing personal things about himself, until the reader comes along to connect to his realness. (“Leonard Cohen”)

Be it his family, his community, or nature itself; they all wore his adornments. His children were trophies. (“Margaret Laurence”)

The alphabet has been a major influence on many poets. (“Profound Forisms I”) 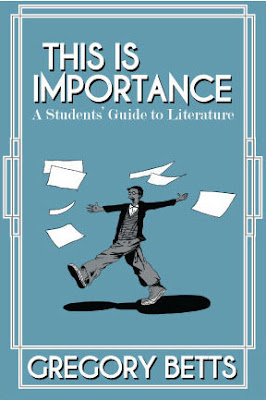 As a reader, one can approach these lines with absolute delight, perhaps the entire opposite effect the same lines would have on a professor of literature discovering the same within a paper by one of their students. The book is broken up into a series of thematic sections: In the Beginning was Myth, Definitions I, European Art and Literature (including William Shakespeare, Jonathan Swift, The Romantics and others), Profound Forisms I, Canadian Literature (including Susanna Moodie, E. Pauline Johnson, Archibald Lampman and others), Engendered Profoundisms, Modern Canada (including Lucy Maude Montgomery, Robert W. Service, Sinclair Ross and others), Contemporary Canada (including Margaret Atwood, Sheila Watson, The Small Press, bpNichol, Gail Scott and others), American Literature (including Edgar Allan Poe, Ursula K. Le Guin and others), Definitions II, Profound Forisms II, One-Offs, Misspelled Author Names and Definitions III. Betts has been slowly compiling these odd slips for years, and, removed somewhat from their original contexts, many give the impression that they could exist within language and/or lyric poetry. There have been numerous poets who have worked through selections of found and/or lifted materials to create works, whether the flarf poets, or Lisa Robertson, selecting and re-ordering lines from her own notebooks to compose new work. One idea and one phrase bangs up against the other, and somehow creates something new, and entirely beautiful. Has Betts, through compiling lines from the papers of so many former students, somehow constructed his most successful collection of poems?

The Church burning is funny because we all think like that. You have to laugh at your morality. (“StephenLeacock”)

It is questionable whether the novel has taken place. (“Sheila Watson”)

Some Canadian poets embraced this ideal and Louis Cabri as well. (“The Small Press”)

Joe and Billy like to experience each other’s dialogue. The book, however, refuses to show them talking. (“Michael Turner”)

Helen of Troy used to date free verse poets, but is now physically constrained. Free verse has no chance with meaning. The battle between Greek and the Trojans was basically like the contemporary poets and free verse. Helen, on the other hand, is saved by math. (“Christian Bök”)

Ironically, she was born in the same year that her mother gave birth. She was not an active participant in her birth, that was mostly done by her parents. (“Souvankham Thammavongsa”)