PHOTOGRAPH #1
This is a photograph of a domestic interior. Because this ghost manifested primarily in an auditory manner, it is hard to see anything of significance in this photo. Note however the ghost’s baby tooth crumbling in a dish on the kitchen counter (foreground) and further back in the room, the boom box that went on at random times, always when there was a Harry Potter story tape in it.

American poet Elizabeth Robinson’s newest poetry title [see my review of her previous title here] is the absolutely gorgeously-produced hardcover On Ghosts (New York NY: Solid Objects, 2013). Given the label “poetry/essay” on the back cover, On Ghosts shifts Robinson’s structure into the territory of American poet Cole Swensen, constructing a sequence of poems around a central thesis or subject, although Swensen might have held the “Explanatory Note” that opens Robinson’s collection back, slipping it into the ends of the final book. And yet, the deceptively-titled opening note feels less separate from the collection as simply the first in a series of pieces that make up the collection. As the “Explanatory Note” opens:

This is an essay on the phenomenon of ghosts and haunting. It arises in relation to the possibility that a self or a site might be haunted. I do not take this phenomenon to be negative or positive, only neutral. As I understand it, this occurrence reveals little about phantoms and visitations and is more disclosive of conditions that locate themselves in specific sites or persons. These conditions calibrate individuals or places, make them vulnerable to the heightened perception, which is hauntedness. 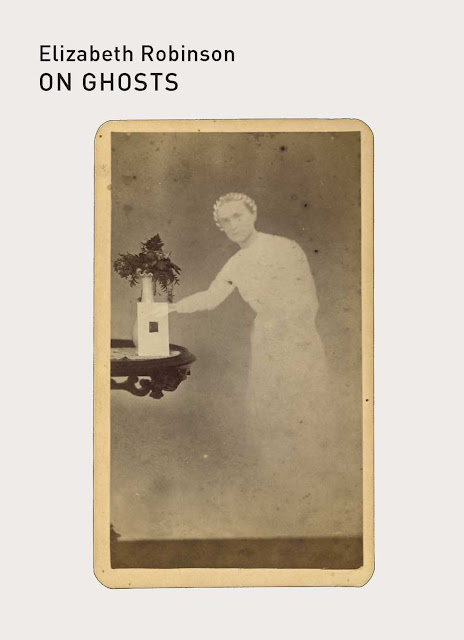 There is something interesting in the way she wraps the entirety of the work around a central theme, thesis or idea, suggesting both a looseness between the individual pieces, and a tightness to the work as a singular whole. This is a structure her books have been working up towards for some time, such as her recent Counterpart (Ahsahta Press, 2012) [see my review of such here] and Three Novels (Omnidawn, 2011) [see my review of such here], each suggesting the kind of structures that pull to the fore of On Ghosts; each of the collections cohere more openly and obviously around an idea, and do become just as much essay as a collection of poems. “Another child speculates that it is in the nature of the ghost to / be broken.” she writes, to open the poem “The Relation of Mother and Child / to Haunting and Ghost.” The essay/poems in this collection are exactly what the title promises, and a book in which the questions and the study itself appears to hold more attention than any kind of singular, simple answer. Through the poems, Robinson speculates, but offers very few conclusions, but for the spaces between the pieces themselves. Constructed predominantly through prose/prose-poems, On Ghosts works through a series of incidents, reports and photographs, allowing the conclusions to reveal themselves slowly, themselves nearly ghost-like and ephemeral. As she writes to open the poem “Definitely Documentary”: “Narrative is a falsification, but still, inside it, strange things begin to happen. The following should be considered as documentary.”

You can arrange the page and enumerate all the propositions you like, but this is a page, and words may irritate its surface, dog-ear and crease it, but they will never truly impact the surface, and they will never escape their page.

Perhaps this is a spurious analogy.

Elsewhere we studied the writer, and we asked, What was his body, what was his soul, what was the word to him? We concluded that the word, his word or words, was like an autoimmune disease which attacked him, the word’s own organism, his soul and his body. This may be the better analogy.