THE THING ABOUT SPEECHES

is that when we are giving one, there are many more people watching us than we are watching. We make an effort not to watch them. We speak to the space just an inch about their heads. It looks as if we are looking at them, but we aren’t. we are looking just past them. It is for their comfort. Especially those close to the podium, for whom the fear of being looked in the eye is especially great. 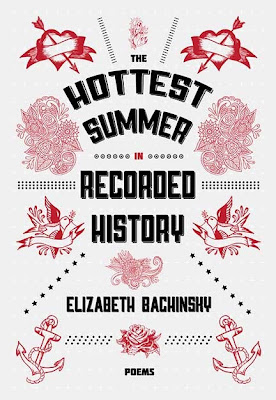 The purpose of American Hybrid: A Norton Anthology of New Poetry (New York NY: W.W. Norton & Company, Inc., 2009), edited by Cole Swensen and David St. John, was in reconciling the break that runs through American poetry and poetics. As Swensen says to open her introduction, “The notion of a fundamental division in American poetry has become so ingrained that we take it for granted.” In Canadian poetry, those divisions exist as well, and few connect so well as through Vancouver poet Elizabeth Bachinsky, who manages to navigate her way through the confessional aspects of her trade collections Home of Sudden Service(Gibsons BC: Nightwood Editions, 2006) and god of missed connections (Gibsons BC: Nightwood Editions, 2009) with the procedural of Curio: grotesquest & satires from the electronic age (Toronto ON: BookThug, 2005; second edition, 2009) and I Don’t Feel So Good (Toronto ON: BookThug, 2012). On the surface, it reads as though she negotiates the divides in her own writing through sending manuscripts of one kind to Nightwood Editions, and manuscripts of another kind to BookThug. Bachinsky’s response, it appears, is to keep the two sides of her interest relatively separate, while allowing the occasional bleed from one to enter into the other. Still, it’s uncertain whether or not the divide in her writing begins as a conscious thing. In her fifth trade poetry collection, The Hottest Summer in Recorded History (Nightwood Editions, 2013), Bachinsky returns to a collection of lyric semi-narratives, composing a number of pieces as travel poems, written during an extended period of Canadian travel, in which the author was engaged with readings across the country.

What do I love to say? I love to say
We always do this. We always walk through
Mile End on a weeknight before supper and then you
and I go for steaks on Saint-Laurent and they
leave butter on ice and loaves of dark rye bread
and a dish of cold kosher pickles on a table
covered with white linen. I visit when I am able.
I say whatever comes into my head.
I say I love this place. Love the families
who come in wearing fancy suits and dresses.
There’s a good one. A gold dress. His
suit is good, I think. I can’t tell if he’s
rich. But tonight you’ve got money and so do I.
We always drink the wine and eat the rye.

In many ways, I Don’t Feel So Good, her previous trade collection, was Bachinsky’s way of reconciling the two previously distinct and separate threads of her published work, providing some procedural to her narrative confessional. In this new collection, the thrust behind each poem is in the narrative, at times speaking directly, so to speak, into the camera. Many of the poems in The Hottest Summer in Recorded History read as variations on the epistolary, as most are composed directly for or to an individual. Given that her list is predominantly that of Vancouver and Montreal writers, including Jon Paul Fiorentino, Amber Dawn, Michael Turner, Gillian Jerome, Peter Dubé, Jenn Farrell, George McWhirter, Donato Mancini and David McGimpsey, it highlights the fact that these were pieces composed during her Canadian travels. There is an ease to Bashinsky’s poems in this collection, free from the tensions that brought some of the strength to her previous collection, which emerged from a series of journal entries, which in itself, is a variant on the epistolary. One of the poems in this new collection, “I DROP YOUR NAMES,” writes directly of and to Jenn Farrell and Gillian Jerome, composing a poem of name-dropping that speaks of the problems with being too name-droppy in poems. It opens:

When I see your poems
and see my name there
on the third line, balancing
like a teacup on the lip
of a ledge, and there is Gillian
on the fifth and Jennifer
on the sixth, I am moved
to tell you, please stop
putting our names in poems.

Instead of being ironic, the poem feels exactly part of the same problem she discusses. Despite knowing most of the authors that she speaks to and for in this collection, a number of these pieces feel so personal as to interfere with the poems. I don’t mind name-dropping (as she calls it), but the names included shouldn’t be distractions, or require the reader to know who these individuals are to appreciate the piece. And yet, the strongest poems in The Hottest Summer in Recorded History emerge when those individuals she writes are put aside, allowing herself to compose, and not simply gesture; as though there is something sitting just outside of the poem she doesn’t have to explain.

In which I dream of bikini academia,
my flat-ironed hair smooth and soft as sun-

tan lotion slicked on my taut, perfect abs
which I flex on Venice Beach, one

perfect flex after another perfect flex
as I crack the perfect American book of poems.

I am brilliant as a collegiate smile. The weed, the sex,
central to my thesis. The palms

give me shade, cool my fierce beauty
which is angular and angry and knows just what it is worth.

And who is on that muscle beach with me
but stranger after stranger, each tall and tooth-

some? I bite. My lines American lines
because they sink right in. I can fly anywhere,

but it’s you who fly to me, parched for limes
steeped in vodka, the breeze off the Pacific, my black hair.