I don’t know what to say about him.
He is no longer a phantasm,
But not yet a sign.

The seagulls have taken residence
in the grocery parking lot.
Their squawks and squeals
each morning circling the block.

He lives by the ocean.
There is just a pretend one here.
There is a beach. And I can stand there
on the edge amid the wind and wave breaks
and say to myself: “I am the ocean.”

Perhaps he has sent the gulls
to pretend with me.
That would be a sign. A recognition.
That’s the kind of thing he’d do. (“TECHNOLOGIES”) 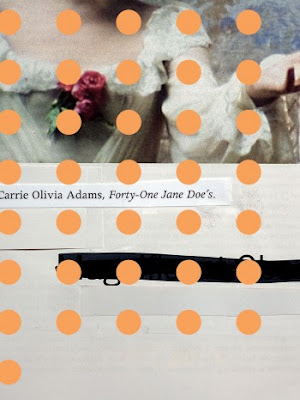 I was very taken with Chicago poet and filmmaker Carrie Olivia Adams’ first trade poetry collection when it came out, Intervening,Absence (Boise ID: Ahsahta Press, 2009) [see my review of such here], so was enthused to see her second, finally, Forty-OneJane Doe’s (Boise ID: Ahsahta Press, 2013). Constructed in nine sections with an accompanying dvd of short films, the first page opens: “She would begin by predicting the weather.” Forty-OneJane Doe’s is a collection of voices and anonymity, attempting to shape an absence, much the way Robert Kroetsch did through his narrator, Raymond, seeking Rita Kleinhart in the poetry collection The Hornbooks of Rita K. (University of Alberta Press, 2001). In the notes at the back of the collection, she tells us that the title section, the eighth of the nine sections of the collection, “The Lives of the Forty-One Jane Doe’s,” “Was inspired by the Forty One Jane Doe’s cocktail at the Violet Hour in Chicago and is dedicated to its bartenders.” Adams composes her Jane Doe’s into the suggestion of Janes as possibility, composing her collection as a polyphony not just of voice, but of subject and purpose; sometimes Jane (whether the singular or plural Jane) is lost in herself and her multiples, and other times, they are the bond which holds all else together. Adams’ collage of Janes is centred around a multiplicity, and not any single, straight line. Towards the end of the collection, the final poem/section, “Voice Made Small,” begins: “My voice made small / travels with others / along the copper wires.”

The Janes sprang from monuments.
From city plans; from bridge blue prints.

One day there were high rise office buildings
and tenements and grids
and alleyways sunk under with rain water.
And the Janes came with them.

Amid this nonstop flock of lookers,
witnesses in tow,
children, lovers, would be
Janets, Jills, and Johns—

All women warn you that they are trouble,
but the Janes mean it.
(Though they’ll apologize afterward.) (“The Lives of the Forty-One Jane Doe’s”)