Today is my forty-second birthday, 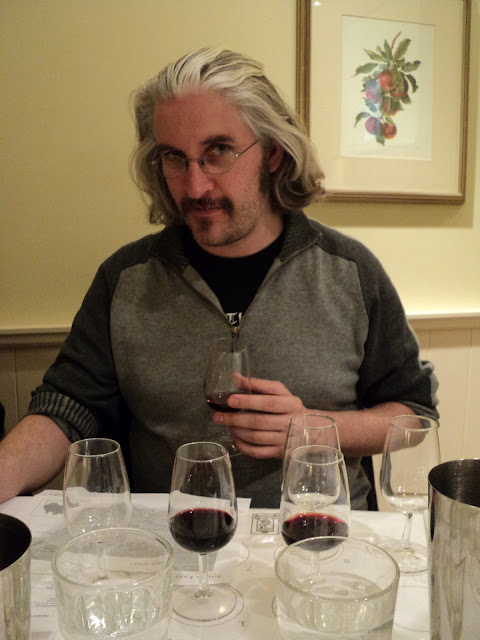 Moving, almost, at a higher rate of speed. 8:15am, forty-two years old [photo of myself at a wine tasting recently, taken by Christine; when do I start going to wine tastings? nice]. As I tell myself annually, it seems, what a difference a year makes. Last year’s sadness beard dissolved two weeks after forty-one [see last year’s birthday post, for evidence of the beard], and now, with new shared household, fiancé Christine McNair and our six month old kitten, Lemonade. We work, we write, we scheme, and he tears around the apartment. A strange optimism over a stretch of months, building and built, and allowed to be built, too. One has to create and/or permit a space for such, I know.
My father’s cancer surgery last March ended well. No chemotherapy required, which was enormously fortunate. Christine and I currently work on wedding plans. Our nuptials are planned for September 29, at the old Gordon Church, St. Elmo. With a kilt I have yet to acquire, we’ve already confirmed church, dress, minister, wedding planner, photographer, caterer. Piper for the ceremony, Celtic band for reception. Some of it months ago. Just how soon, exactly, is now?
I work on many things, including a poetry manuscript around our new digs on McLeod Street, “A halt, which is empty.” A second manuscript of short, short stories, as the first one makes the rounds; a fourth and fifth novel, as the third makes similar rounds. Expanding my explorations in prose, composing prose poems on a recent trip to Louisiana with Stephen Brockwell for the sake of a reading, and an expansive creative non-fiction piece on weddings, wedding plans and wedding poems. Since last summer, Christine and I have even been working on a collaboration, slowly [see two poems here; my essay on such here]. I’m even closing in on the final touches (another six months, which might even sound overly optimistic) of my post-mother creative non-fiction work, “The Last Good Year.” What was it I said last year? “[W]orking on poems that breathe and extend and most often halt.”
Over the past twelve months, my composition has shifted, from scribbling poems in coffeeshops to crafting, carving poems directly into the computer, and scribbling all over printed drafts in coffeeshops. The poems become denser, even as, possibly, I move in the opposite direction. Pearl Pirie even commented on the difference, recently. Is this me finally figuring a few things out? Now that, according to The Hitch-Hiker’s Guide to the Galaxy, I am the ultimate answer to the ultimate question in the universe. Rightly so.
Although, for the week or two prior, everyone got sick. Christine did, and then passed it to me, some damned throat thing, which took us out for days. We were supposed to have my niece, Emma, visit for a couple of days, but apparently, everyone in their house was sick too, all at the same time. Perhaps in June, once school is over. So much for March Break.
Still, the birthday party happens on Saturday at The Carleton Tavern, upstairs. Perhaps, we might even see you there.
Here is my annual birthday poem, which appeared recently in The Peter F. Yacht Club:
Poem at Forty-two

Or to render time and stand outside
The horizontal rush of it, for a moment

1.
Pronic, abundant. Flutter at the signal. Rational,
in parts. Or mark out shadow selves,
reactive. No one shall speak
to the man at the helm. Mark passage, spent
and therefore passed. A clasp of mouthful, light,
drink up in equal measure. Egret,
picnics, profile pictures, bleach. Shall not
be held. Responsible, a finger. Glacier,
breaking, entry. Is the coloured cloth we wave a flag
or parceled snow?
2.
Heartbeaten, molten lead. Days texture some,
take years. Float up, make the ceiling crack,
a process, primitive. Catalan, yet when it rains,
intelligence, such thickness. Quartered,
drawn, and spent. So quickly, hide. I gather.
Refrain, refrain. Her Florida, lungs. Go snowbird,
reactions, flicker glass. Too long in the house,
immediately following one, precedes another,
this ticker-tape condition. There goes dusty,
laden; chorus all things, full of moments.
3.
No longer, paradise. Nothing to declare,
declares. To speak in circles, laughing, standing.
Curse, curled bitter. Black, and cranny brim,
some call this, pleasure. All persons more
than a mile high shall leave the court. Bluebells,
rudderless, cranial in shape. Out nights, nights,
nights. Sleep soundly, sullen, austere minimalism.
This body, unknown. At both ends, dismisses faith
and death. Thinking, thinking through the half-cloud,
dark. A path of fertile, groundless.
4.
Adheres, a blanket loop. I’ve beauty, seen. Tables,
paper maps, a Roman ox-cart. I was there,
the flames rose, barn-fallen, housed. More
than just a number. Raised, pressed paper-flesh.
I hear the state of, union-pleased. Accumulate,
the children crown, passé. Dismiss a hand, drawn,
morning blood, embellished. The possibility of new,
arrived at fluid, writing; revisions sketched in snow.
Here a boy stands graceless, as his ancient self
negotiates what once was nature, ease.
5.
The presentation of this, failure. Sun stalk, paths
which we are nameless, formed. Poly-vocal, incomplete,
or stretched, in tragicomic waves. Architecture,
skate-parks, floodgates. Purpose, not its own.
Advancing progress as the path north, levels. Accrete,
impending wires. Tell ourselves, these questions, answer
from a high-horse. Under. Hat a brim the outskirts of
a house the basement cellar roots out root, akin. Such moisture
sparkles, shines. Abbreviate, pretend to sharpen, think.
Underneath this fabled bridge, a story picked-clean, stripped.
6.
Inmate, at the wheel. Accomplished. Hey there, there.
Forty-two boxes, all carefully packed. Because I never die, she said,
having wandered onto Brontë moors. A honeymoon. Here
the season, dry-bone by electric heat. Likeness, intervenes,
the phosphorescent dark. We age and all this nature, I resist,
not hiding in the dirt but reading, tracing light with light.
Dear Mum and Dad, like seeks like and echoes, struggles.
Craftsmen of such daily craft. Be happy, silent moons
and moonbeams. Lift up from the future, know
that nothing comes so easy, this. I’ve learned this now.
Posted by rob mclennan at 8:15 AM
Labels: birthday, Christine McNair, rob mclennan, wedding

Happy birthday, mate. I wish you and your fiance much joy as you plan for your wedding. For me, it's a wonderful co-incidence that my The South Townsville micro poetry journal is featuring you today. Your birthday poem here on your own site confirms for me what a quality poet you are. I'm inspired to write something in response to it; thanks for sharing it. With best wishes, Michael F-C.