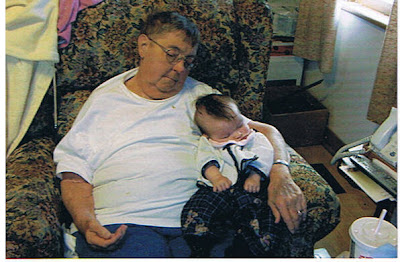 I seek coherence, where there seem only fragments. Traces. A snapshot of my mother four or five years before she died, napping with third grandchild, my sister’s second. Rory.

A portrait of my mother. After the funeral, left with flowers, and little else. To paraphrase William Carlos Williams, I am trying to name things, seen. I am working to explain, to clarify. For myself. I am heading into disconnect. My mother is dead.

Susan Howe in My Emily Dickinson (1985): I am heading towards certain discoveries.

I am writing my mother in parcels, fragments. In parchment. This hole, what I might call a portrait.

The day she was born. According to various internet searches, Sunday, June 30, 1940, the day she was born, German forces invaded the Channel Islands, marking the only part of Britain the Germans occupied. This was the same day Dale Messick’s classic strip, “Brenda Starr, Reporter,” debuted in print, appearing in a supplement in the Sunday edition of the Chicago Tribune. From creator Messick’s retirement, the strip continued through artist/writer teams made up of Ramona Fradon and Linda Sutter, Mary Schmich and June Brigman, with its last strip published January 2, 2011. Six months longer than my mother.

This is the book through which I attempt to understand the whole of two lives, mine and hers. By mapping. I sketch, in hopes to draw out.

I hold up Heloise d’Argenteuil’s astrolabe. I hold up Samuel de Champlain’s, lost in a field.

Her daily regiment of anti-rejection pills. Would fill her open palm.