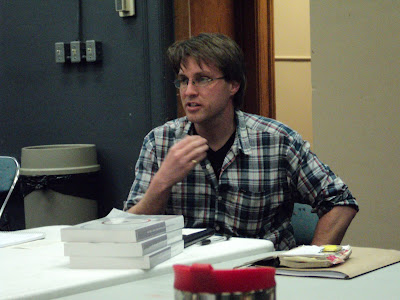 Jay MillAr (pictured) recently did an interesting workshop on the long poem at The TREE Reading Series, engaging a group of nearly twenty people in longer works by Christopher Dewdney and LouisDudek. Have you been paying attention to the workshops being hosted by The TREE Reading Series? Apparently they even have John Barton coming to town, soon.
And I had my wisdom teeth out this past Monday, in case anyone was wondering why I’ve (in other media) been quieter lately. Ow, ow ow. Oh, painkillers.
There are still spaces available for the spring 2012 edition of the ottawa small press book fair.
And keep an eye on the above/ground press site. As well as a dozen or two new titles since Christmas, there are forthcoming titles by Lisa Robertson, George Elliott Clarke, Robert Hogg, Rob Manery and Jay MillAr, among others.
Chicago Il: From Dancing Girl Press, a Chicago-based chapbook publisher focusing on publishing and promoting the work of women writers, comes Edmonton poet and publisher Trisia Eddy’s chapbook Edith and Aurelia: A Romantic Tragedy in Five Acts (2011), a small book that has already managed a small amount of attention.

Act I, scene i. A sink near the window.
Stains on he hand (blackberries) make one think of age. Brisk wind lifts lace she has taken from a threadbare tablecloth, fashioned into drapes.
Always the spendthrift.
Colander empty, pats those spotted hands on an older apron, one her mother made. Sighs, looks across the garden. A bold lust of potatoes ready to be dug.
A task her son might be up to, if she had one.
Kettle on gas range whistles a reminder, tea leaves need soaking.
That time of day.

Eddy is now (I believe; unless there is something else I’m missing) the author of three single-author chapbooks, after the self-produced what if there’s no weather (Edmonton AB: Red Nettle Press, 2007) and a chapbook produced through Edmonton’s Olive Reading Series, as well as two collaborations—recycled cities (2008) and on bondage (2009)—which also appeared with Red Nettle Press. In five acts, Eddy’s poem slips through disappointments, and lovely distances reached but never attained, stretching the tragedy of what could have been into a taut, lovely, lyric. The Victorian-era image of a less-than-delicate lady in her undergarments on the chapbook’s cover is reminiscent of the Victorian-era content of on bondage, a text quite critical of the Victorian treatment of women. Eddy’s short sequence works a delicate movement through the standards of that era, from the second-class treatment of women to depictions of gardens, as well as what needed to be hidden, in order to be said.

Scene ii. The same.
Regret makes no secret of itself, wafts openly through the air.
Restless, scarred, unburied.
Drum within

Columbus OH: Now that I have my own small chapbook produced from Free Poetry For, I’ve received some of their other publications, including Raymond Cummings’ The Joy of Cooking: Poems, 2010 to 2011 and Adam Strauss’ Taking Off, both of which are available (along with all their eventual titles) free as pdf download. Theoretically, these are small chapbooks produced in ongoing runs, and distributed free in random, public spaces just about anywhere they can imagine.

Using Focus
The first couplet
gets your foot in the
door. And what of the
room? Maybe hopes
hung on axioms or
draped over high-
backed desecrations
of phrase. Insider
slang, lexical punk.
Swap out syllogisms;
tie you up. Silver
pocketed and then
the fixtures, bail. (Raymond Cummings)

Raymond Cummings’ The Joy of Cooking: Poems, 2010 to 2011 is a selection of quick, short poems that work to pack punches, with varying intensity. I’m rather taken with some of the shorter pieces, watching how their straight lines translate into single moments. Adam Strauss’ Taking Off, on the other hand, is a short collection of either untitled poems or a sequence of poems, all of which exist with rather exquisite twists. The lines accumulate, and twirl, managing to confuse and morph into something that perhaps the words by themselves could never have achieved.

In Paris is the only
Place I don’t wear Wranglers
Or have hopes of dating
A beefcake translates chocolate
Into curry-flavored scrims and
The fluffiest you could whim for
Heretofore revisionist
Praxis is the axis of
Reflection will revolve around
Like your screw-you to me
Skirls my heart till I
Know at some
point I need to be
Awaiting
In a maternity ward.

Honolulu HI: The final in the twelve monthly Tinfish Retro Series chapbooks is Timothy Yu’s 15 Chinese Silences (2012). As the author writes at the back of the collection:

These poems are part of an ongoing project called 100 Chinese Silences. They were begun in response to Billy Collins’ poem “Grave.” The speaker of the poem describes the “one hundred kinds of silence / according to the Chinese belief,” but then admits at the end of the poem that these Chinese silences were something he had “just made up.” I took it upon myself to write these 100 Chinese silences.

Yu’s is an intriguing project, emerging from such an odd source. Some of these pieces are quite interesting, but others strike as overly-storytelling, stretching out what could have been stronger by boiling down to the bare bone. It reminds me of a line of Dennis Lee’s (I believe), that my memory paraphrases as: “For a devotee of silence, he sure goes on…” But is this Yu’s problem, or perhaps mine? I’d be interested, now that I’ve seen his selection of fifteen, the final product when it appears in trade form. Just what form might the finished silences take, in the intervening time?

Chinese Silence No. 8
after Billy Collins, “Hangover”
If I were crowned Holy Roman Emperor this evening
every poet who speaks of Chinese Silence
on National Public Radio
would be forced to mutter the name of Ezra Pound
Ezra Pound Ezra Pound
then be required to read the complete works
of Marianne Moore and write a dissertation
titled “’Superior People Never Make Long Visits’:
Silence and Chinoiserie in the Poetry of
Marianne Moore Marianne Moore”
after which the poet would be quizzed
on Asian American poetry then executed by Zen
regardless of how many times he begged
for mercy calling upon the name of
Gary Snyder Gary Snyder

Yu’s project reads as a complex, articulate swipe at Billy Collins, whether justified or not. I’d suspect that this project is still in its early stages and, perhaps, after one hundred poems, could be boiled down to something bullet-proof, providing more weight to the initial impetus of the poems. Some are good, some are okay, and others have the potential to be something great. As he writes at the end of “Chinese Silence No. 5”:

Q: Do you have any advice for a young Asian American poet?
A: [silence]

And for the next two Trees there's a used book sale. Anyone can bring in books as a fundraiser for Tree. Each sells for $2.

Thank you for the kind words! I hope all's well!