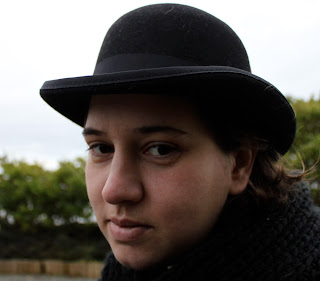 Alex Leslie writes fiction. Her chapbook of microfictions 20 Objects For The New World was published by Nomados (2011) and her book of stories People Who Disappear is forthcoming from Freehand this April. She's working on a collection of stories entitled This Could Be You. She is guest editing the Queer issue of Poetry Is Dead magazine (submit! deadline June 1st! this is a shameless plug!). She is from Vancouver.

1 - How did your first book change your life? How does your most recent work compare to your previous? How does it feel different?
It's hard to say which was my first book -- my Nomados chapbook or my Freehand collection. The Freehand book is much longer and I think I'd sold that book before I sent my microfiction manuscript to Meredith Quartermain at Nomados. So I'll pretend these things happened simultaneously, because there is no real before-and-after. I don't think any single publication (story or book or chapbook) has "changed my life." I used to have that expectation, but now I just try to have different projects on the go at the same time to spread out my energy and stay interested. Both books gave me more confidence, generally speaking. The Freehand book I'm traveling to different cities to read from so I guess that is a tangible change -- different audiences, reading away from the West Coast, etc.

2 - How did you come to fiction first, as opposed to, say, poetry or non-fiction?
I've always written fiction. I still do. I've always been drawn to human drama, the complexity of human interaction, how weird and insecure and contradictory people are (including myself of course). I've published some non-fiction but stopped because I found non-fiction limiting -- I like the option of making up outright lies and adding whichever part of reality suits the pacing of the story, etc. I don't know how to write poetry with linebreaks. I love that kind of poetry but have no idea how people pull it off. I stick to rectangle-shaped things. Sometimes people tell me those things are poems and i say yes.

3 - How long does it take to start any particular writing project? Does your writing initially come quickly, or is it a slow process? Do first drafts appear looking close to their final shape, or does your work come out of copious notes?
I am an obsessive note taker. I will write down your conversation in a bus, in a coffee shop. If I don't know you personally I don't have any respect for your privacy. Just today I was on an escalator going up out of the train station at 41st and Cambie here in Vancouver and the woman in front of me was talking about losing her husband five years ago  and how she's just getting through it now and the woman beside her, an acquaintance, was obviously not interested and going through the motions of sympathizing. I was eavesdropping because my dog died recently so I'm obsessed with other people's stories about grief (I know, I'm morbid). So I will probably write something about that woman but her husband will be my dog. Or a woman will ride the same escalator over and over to grieve someone. Or something. You get the general idea. I think this is the associative, weird, invasive way most fiction writers work. I take lots of notes, gather scraps, circle things pointlessly, etc. When I get to the point when I can write paragraphs, I am so fucking relieved. At that point, I can write fast. It's the gelling and confidence part that is the hardest and most crucial part. Mostly the confidence part.

4 - Where does fiction usually begin for you? Are you an author of short pieces that end up combining into a larger project, or are you working on a "book" from the very beginning?
No, I don't work backwards -- from the big concept to the bits. I envy people who can do that. I have to struggle upwards from little shards of junk. Stories begin for me in something weird that I notice. By weird I mean incongruous or intensely sad. I hate the word "poignant." Something that makes me write it down. I write outward from something like that, a moment or a detail. I don't think I've ever written forward from a scene or event. I don't know how.

5 - Are public readings part of or counter to your creative process? Are you the sort of writer who enjoys doing readings?
I enjoy readings. I performed music from a very very young age and by the time I was in my teens I was performing for big audiences (I played in orchestras). I used to have severe stage fright but that was worked out by just having to perform over and over.  So now I can enjoy performing and enjoy observing people's reactions and responses while I read. I can't say the readings are PART of my process tho. I'm not a performance poet.

6 - Do you have any theoretical concerns behind your writing? What kinds of questions are you trying to answer with your work? What do you even think the current questions are?
I write different kinds of things. Stories with plots and characters; more abstract stories. I'm interested in how language-focused fiction can be before the emotional connection is lost. I'm a person for whom language is emotional connection so this balance is hugely interesting to me. (By that I mean I can get emotional listening to sound poetry -- what the fuck is up with that if language is about "communication"? etc etc). So I suppose that's a theoretical concern of mine, if I have to state one. I don't know what "the current questions" are, but I'm interested in who gets to ask questions and why. I'm guest editing the Queer issue of Poetry Is Dead (published by Daniel Zomparelli) because I'm interested in bringing together current Queer Canadian poetry and experimental prose from around the county and across generations.

7 – What do you see the current role of the writer being in larger culture? Does s/he even have one? What do you think the role of the writer should be?
Well, yes, writers have roles. Everybody has roles and plays roles all the time, whether or not we acknowledge them. I think the writer's role is to observe, absorb and rewrite to interrupt dominant scripts. Also, sometimes I read something so beautiful, like Lidia Yuknavich's memoir of abuse and life The Chronology of Water, that I think the role of writers is to create beautiful things. But it's bigger than that. This is just a sneaky way of making people read that book.

8 - Do you find the process of working with an outside editor difficult or essential (or both)?
The editors I've worked with are Meredith Quartermain and Robyn Read. Both have been perceptive, kind and helpful. I think it's a person-by-person thing. can't make a general statement. I love feedback and conversation but I do tend to have a very set sense of what I want tonally and texturally in a piece of writing.

9 - What is the best piece of advice you've heard (not necessarily given to you directly)?
Someone beloved to me said in my early 20s, Write now because if you don't later you will look back and think "what if I'd written?"

Also I don't know if someone told me this but I picked up along the way from various people who were generous with me that if I shared with other people then I would have more. Which sounds like an after school special motto, but it is fucking true.

10 - How easy has it been for you to move between genres (fiction to creative non-fiction)? What do you see as the appeal?
Very easy. My process is the same so the genre is irrelevant.

11 - What kind of writing routine do you tend to keep, or do you even have one? How does a typical day (for you) begin?
Don't have one.

12 - When your writing gets stalled, where do you turn or return for (for lack of a better word) inspiration?
I bike. I lift weights at the gym. Endorphins are very inspirational. MFA programs should have an exercise component.

13 - What fragrance reminds you of home?
The ocean.

14 - David W. McFadden once said that books come from books, but are there any other forms that influence your work, whether nature, music, science or visual art?
Music. Hugely. Right now I'm listening to "One Beat" by Sleater Kinney on repeat. Also films.

15 - What other writers or writings are important for your work, or simply your life outside of your work?
Julio Cortazar

Dear Sugar On The Rumpus

We The Animals by Justin Torres

So so so many writers. This list is completely incomplete and random

16 - What would you like to do that you haven't yet done?
Backpack in Europe again.

17 - If you could pick any other occupation to attempt, what would it be? Or, alternately, what do you think you would have ended up doing had you not been a writer?
Counseling. I've worked a lot, in different capacities, with people with addiction issues and with what society broadly calls "mental health issues." Now I will slip into some "everybody has a story" platitude. The story-writing part of my brain loves complex people.

18 - What made you write, as opposed to doing something else?
A need to depict accurately what was happening inside of me. Shyness.

19 - What was the last great book you read? What was the last great film?
Film -- Monsieur Lazhar. It's about a man who is a refugee who gets a job teaching in an elementary school. His students' (white) teacher has just committed suicide. He has experienced and is experiencing true, violent, intractable pain, unknown and unknowable to those around him. They are experience a contained, sanitized instance of middle-class grief (though very real to them). He releases the kids' grief in the most quiet, tender way possible, with no judgment or need for "healing" present. It is what it is, as they say. Such an amazing film about the grace of accepting suffering.

Book -- Just read Justin Torres' We The Animals which was gorgeous. Series of vignettes depicting three brothers growing up in a poor family with a violent father. Read it for the language. I hate plot summaries.

20 - What are you currently working on?
A bunch of stories.

Editing the Queer issue of Poetry Is Dead.