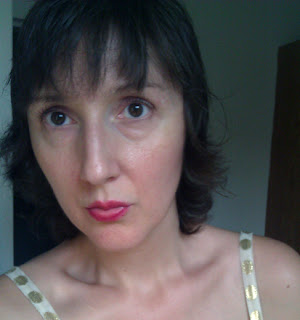 Ana Božičević came from Croatia to New York and wrote Stars of the Night Commute, a 2010 Lambda Literary Award finalist. She works & studies at The Graduate Center, CUNY, where she helped found the Annual Chapbook Festival and Lost&Found: The CUNY Poetics Document Initiative. A new chapbook, War on a Lunchbreak, is out in Fall 2011 from Belladonna*. For more, visit www.anabozicevic.com.

1 - How did your first book change your life? How does your most recent work compare to your previous? How does it feel different?
When Stars of the Night Commute was picked up by Tarpaulin Sky Press, I felt the meaning of the word “debut.” The book formalized my relationship with poetry in America, I sang out, I was here. Since that channel between me & America opened, I became obsessed with writing a more public poetry. I had been reading lots of funny, brilliant, private, idiosyncratic work that felt like it had sort of given up on the possibility of the political lyric, on poetry that is public by virtue of something more than its arty nature (in that art belongs to everyone). I would read poems and think, this is great, but what does it mean? And even worse: what does this do? I asked it of my own poems all the time. I was told these were unsubtle questions. Démodé. I get meta – I love chaos too, and I do think refusal can be noble – but it just wasn’t doing it for me. I wondered if there was maybe something wrong with me.

I was in this world, my polis, and things are bad in the polis. I don’t want to be prescriptive about others’ poems, but I sure as hell expect the world of mine. The world just flooded in. Poets tell me they’re scared of writing “bad political poems,” by which they mean poems that just tell things, without a slant. So I had to do it well; I set out to write poems that want to change the world, both complex and simple enough, which do not bore, wipe tears with funny query, unafraid of being beautiful or filthy sometimes – in other words, unafraid of defining essences to stand on. I just finished my second manuscript and I am excited. It feels like news. It’s called Rise in the Fall.

2 - How did you come to poetry first, as opposed to, say, fiction or non-fiction?
I write what I hear, which is most often poetry, and lately, essays, argumentative sentences, manifestos. I don’t really hear fiction, but then I haven’t really been listening for it.

3 - How long does it take to start any particular writing project? Does your writing initially come quickly, or is it a slow process? Do first drafts appear looking close to their final shape, or does your work come out of copious notes?
I write very slowly and very sporadically. Can’t force it, grab it when I hear it. I never know what’s going to come out, and after every poem it feels like I’ll never write another one again. I’m definitely not in control. Lines appear just before sleep, in the middle of the night. Some things seem important, essential when I write them down, and the next day they’re dead in the water; some things unexpectedly explode out and are great. I’m trying to lighten up about it all. It’s maddening to be so hung up on something you can so little control. Like love, I guess.

4 - Where does poetry usually begin for you? Are you an author of short pieces that end up combining into a larger project, or are you working on a "book" from the very beginning?
In the past I’ve written sequences of poems, but in this new ms there is no sequence, each poem is its own grand thing. I deliberately kept the idea for the new book in my blind spot for a while, so I was aware of it but never looked it in the face, because I didn’t want to have a conscious project. Each poem had to appear out of chaos and earn its keep. When I was close to the end, I brought the “idea of the book” out of its hidey hole and quickly arranged the manuscript according to it. And that was that.

5 - Are public readings part of or counter to your creative process? Are you the sort of writer who enjoys doing readings?
I enjoy them. Eileen Myles said something great about readings: people come there to be uplifted in the sense of disappearing, taking off—people want to be beamed up. And I try to do that. I truly hate boring poetry readings and so I give it my all. I love it when the text and voice erase all of us there like a wash of light.

6 - Do you have any theoretical concerns behind your writing? What kinds of questions are you trying to answer with your work? What do you even think the current questions are?
There are many questions. For example the (deceptively) material – war, bombs, Bin Laden, dying for art, selling out, working poets, porn, death, woman/queer, femininity in life and poetry, marriage, philosophy, ocean life, l’art pour l’artism, the color green. Perhaps the most important poem in this new ms is one that will soon come out in Fence, an elegy to a friend who was killed in Croatia a long time ago. An important issue in the world of American poetry is the issue of class, eminently visible to me everywhere I look – there’s not enough critical discussion of the economy of poetry beyond the fake standoffs of the “real deal” poet (the definition of whom keeps shifting) VS poet-worker or -academic or whatever. There’s not enough discussion of economy period, even as it tanks around us. Also race, something I am trying to learn to talk about since, not having grown up in the US, I am only learning to navigate it. And, of course, the questions of canon, creativity & concept (another fake dualism par excellence), production... Yeah, write into all this and write good poems, and I will give you the key to the kingdom.

7 – What do you see the current role of the writer being in larger culture? Does s/he even have one? What do you think the role of the writer should be?
We’re coasting along on this joyful tide of pop culture – shouldn’t we be inventing our own culture? I’m thinking on how to be public without playing a role in Culture INC or hopping on whatever zeitgeisty consumerist rainbow is whizzing by. Everyone is fretting about their Twitter presences or whatever. What? Right now, for example, there are protests on Wall Street that our major media are not covering at all—and poets have began to speak out, attend the demonstration, organize. This is something I’ve been hoping to see for a long time. For me, to write is no longer enough: I have to speak out. Do you?

8 - Do you find the process of working with an outside editor difficult or essential (or both)?
I don’t have much experience with it. I’d welcome such engagement.

9 - What is the best piece of advice you've heard (not necessarily given to you directly)?
To strive for clarity in my obliquity (Tom Sleigh). And to shine alone in the sunrise toward which I lend no part (WCW). I took the latter to be an address to the immigrant in the English language sky.

10 - How easy has it been for you to move between genres (poetry to critical prose)? What do you see as the appeal?
I’m still thinking about genre, let me get back to you on that. I don’t really believe in it, yet I write it. I definitely feel a difference when a poem is coming on. It’s like No.1 and No.2. May I leave you with that image.

11 - What kind of writing routine do you tend to keep, or do you even have one? How does a typical day (for you) begin?
I wake up at 8, let the dogs out, read on the train to Manhattan, work 10-6. After work I take classes or teach, read on the train home, have very late dinner with Amy and fall asleep. Just before I drift, lines start going through my head and so I stir and I write them down. This is usually after midnight. I write them down in the dark.

12 - When your writing gets stalled, where do you turn or return for (for lack of a better word) inspiration?
I translate. It must be what actors feel: how tiresome always to be the same person!—and they have a way out. Translation is a similar escape from me-ness. It’s like free poetry. And of course I have some books I go to, talismans, the re-reading of which brings the sap up. These are different for everyone. For me it’s a bunch of Russians mostly, Marina Tsvetaeva & co, then Bruno Shultz, Diane di Prima, Heraclitus. Some ancient Herman Hesse book I read in high school. That sort of thing. So, I go to things that take me away from myself, or deeper into me. Either way, I escape the surface tension.

13 - What fragrance reminds you of home?
Pine needles & burning wood. This is the smell of the ur-home. I’m not a cosmopolitan, in that I am not sophisticated; sometimes I succumb to the brute rites of nostalgia, sometimes I feel that every place is my home. Amy says, they burn wood everywhere.

This interview is a whole lot of “I”s, all to say: thank you.