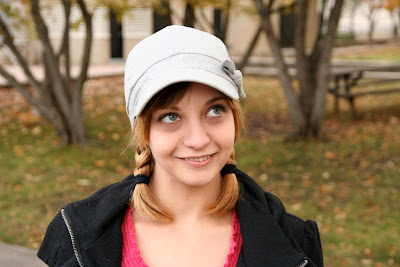 jesslyn delia smith is a recent Carleton graduate living and writing in Ottawa, and has had three chapbooks published through Carleton’s In/Words Magazine & Press. her poetry and prose can be found on her blog, www.jesslyndelia.com, which is updated frequently. feedback at jesslyn.delia@gmail.com or www.twitter.com/jesslyndelia.

my first chapbook was edited and published by Cameron Anstee and In/Words when i was in my second year at Carleton. the chance to have Cameron help me with that first chapbook gave me a boost of confidence to continue to publish with In/Words/at all. i find that my more recently published poems reflect the growth in my writing since that time, but the structure and style of some of those poems is recognizable still. it’s only been a couple of years since then. the first chapbook allowed me to set a very basic standard for myself and my poetry, that i can always continue to grow beyond.

i actually didn’t start writing poetry until i was in high school, when i began to use my writing as more of a therapeutic outlet than anything else. until that point i only thought of “writing” as “fiction-writing”, or i didn’t think of it at all. my poetry grew out of that process of development; now it’s a form that i trust and rely on, although self-therapy is no longer the (only) reason i write poetry.

it can be a very slow process. the writing itself comes quickly and the finished poem rarely looks very different from a first draft, but for me it’s usually a process of combining different pieces of writing together to create one poem or piece of prose.

short pieces come together. i write about the same things over and over again; two very different pieces actually have a lot more to do with each other than they originally seem to, so they inevitably find themselves together in a larger project. i always know that i might take what i think is a finished poem and later throw it in the mix with something else, so i don’t restrict myself to writing a “poem” or “story”.

neither/no. i don't like reading out loud - not even my own writing, just anything. and public speaking isn’t exactly my “thing”.

there have been so many questions i have tried to answer through my writing, but those are for myself and i’m still not sure what they are. i typically position myself, my mind and my physical body, against concerns i have about everything that exists outside myself. i’m fascinated by the physical limitations of my body/bodies in general. i find there’s a lot about bodies and body parts in my writing, and physical objects, attempting to find some kind of stability when in actuality that probably doesn’t even exist. i’m not sure i’m trying to write about that necessarily, but it keeps coming back.

i don’t see writers, individually or as a group of one type of person, as having any real relationship to the culture they are a part of. they have the same relationship to their culture as any other type of person, which is relative and comes down to being mostly insignificant. for me, and maybe from a historical perspective, it’s more about the processes and movements that end up having a real “role”. if one particular writer or group of writers influences a process that helps shape the direction of a culture then so be it, but i don’t think that anyone can define that as it happens.

essential. probably both, but i haven’t had enough experience with editors to really say that.

once my grandma said “don’t save for an occasion, there is no occasion” and i thought that was pretty rad, but i’m not sure who she was talking to. and it has nothing to do with writing. or maybe it does.

10 - How easy has it been for you to move between genres (poetry to fiction to critical prose)? What do you see as the appeal?

it’s never been very difficult, but that doesn’t mean i’m any good at it. i’ve always been able to write whatever i have needed to write. i guess versatility would be the appeal, but that isn’t something that matters to me.

i write at night, if i can. my routine, if you can call it that, is to just write down whatever i can whenever i can and then later it might turn into something worth writing about. i use a notebook, but i’m that person who will also use garbage, receipts, twitter, the back of my hand, my phone, post-its, whatever, as i go. and then i write later, preferably much later, when it’s dark out.

if it’s pretty bad then i let it go all together. i might read, or re-read. if i feel like it’s just a pause then i’ll write a diary entry or a blog post about nothing just to be writing; that’s usually enough, and it’s best if i can do that somewhere outside.

i also like to go online and look at pictures of my hometown/city (hamilton, ontario). there's something about a beautiful place in decay, coming back to life, that brings on forward-thinking.

nature is a big one for me, and science sometimes even though i don’t understand much about either. architecture and, more simply i guess, just the urban landscape, are huge influences for me. the creation of structure is something that i think and write about all the time and if i’m sitting next to a bridge it doesn’t take long before i know what i’m trying to say.

no one person or piece of writing comes to mind. whatever i’m reading at the time is what inspires my writing, whether it be a novel or collection of poetry or non-fiction/historical accounts. no one has ever inspired me.

everything. i haven’t done anything yet.

unless i’m working as a writer, which i’m not, i can’t really answer this properly, but i’m currently unemployed so i guess i’d pretty much do anything.

i pretty much taught myself to read and write, from TV and from books by the time i was three, so i kind of did this to myself. everything else that comes along is never important enough to me.

i can’t remember the last great book i read, which probably means i need someone to lend me a great book, and i don’t really care about movies.

i’ve been working on a collection of poems inspired by T2: Judgement Day for a really long time, but it’s the kind of project that has been pushed aside over and over again as “more important” things come along.