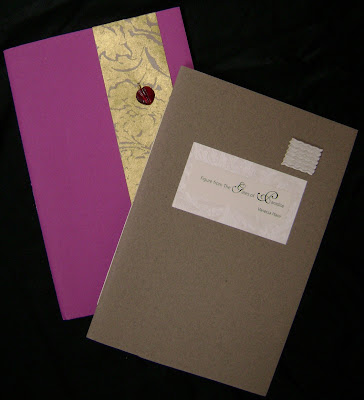 Woodland Editions is a series of chapbooks that were published from about 2005 to 2011. Featuring innovative writing in both prose and poetry, the press produced 16- to 28-page chapbooks, laser-printed and hand sewn. The editions use high-quality papers and are especially attractive in appearance.

Jaime Robles is currently working on a series of poems based on the Hoxne and Staffordshire hoards. She published her most recent book of poetry, Anime, Animus, Anima, with Shearsman Books (2010). Her poems and reviews have been published in numerous magazines, among them Agenda, Conjunctions, Jacket, New American Writing, Shadowtrain and Volt! She produces many of her texts as artist books, and her bookworks are in several special collections, including the Bancroft Library, Berkeley; The Beinecke Library, Yale University; and the Oulipo Archive in Paris. A native of the San Francisco Bay Area, she is now living in Exeter.

1 – When did Woodland Editions first start? How have your original goals as a publisher shifted since you started, if at all? And what have you learned through the process?
I’ve been self-publishing and publishing others for a long time now. I’ve worked in all levels of publishing from limited editions to corporate publishing. Woodland Editions was, to begin with, the name I used for publishing when I first moved back to the Bay Area in 1990. Once I closed Five Fingers Review, the Woodland Edition chapbook series was a way to practice publishing, which I consider one of my craft/arts, on a smaller and more comfortable scale.

2 – What first brought you to publishing?
I was close to Kenneth Rexroth when I was an undergraduate, and when I began printing up my poetry and translations he suggested I contact Roger Levenson of Tamalpais Press in Berkeley. Roger sent me over to Clifford Burke of Cranium Press. Eventually, through my connections at Clifford’s, I began Five Trees Press with Cheryl Miller and Kathy Walkup.

3 – What do you consider the role and responsibilities, if any, of small publishing?
Do the best you can.

4 – What do you see the press doing that no one else is?
Well, presses are always composites of activities. Each one seems to do some part very well, and perhaps others not so well. Woodland Editions does really interesting innovative poetry in beautiful and unobtrusive designs. Other presses do that as well. We hand sew our pamphlets, which is really unusual.

5 – What do you see as the most effective way to get new titles out into the world?
Probably just give books away.

6 – How involved an editor are you? Do you dig deep into line edits, or do you prefer more of a light touch?
I also work as a copyeditor, but that is a role I perform almost entirely with prose and trade books. Of course, I’ll query the author about obviously idiosyncratic spelling and grammar which may not be intentional.

7 – How do books get distributed? What are your usual print runs?
Supposedly we do 100 in each edition. But it’s turned out to be more print-on-demandish than that.

8 – How many other people are involved with editing or production? Do you work with other editors, and if so, how effective do you find it? What are the benefits, drawbacks?
I work with Susanne Dyckman, Brian Teare, and Todd Melicker. When we do work. The benefits, besides getting books sewn, is the great gossip and banter.

9– How has being an editor/publisher changed the way you think about your own writing?
More than anything, hand typesetting affected my writing. There’s nothing closer than writing a poem letter by letter. I seldom hand set any more, but it was a great teacher.

10– How do you approach the idea of publishing your own writing? Some, such as Gary Geddes when he still ran Cormorant, refused such, yet various Coach House Press’ editors had titles during their tenures as editors for the press, including Victor Coleman and bpNichol. What do you think of the arguments for or against, or do you see the whole question as irrelevant?
I began publishing by making artists books, which is always your own words. I don’t have a problem with it. I seldom published my own writing, except as an introduction, when I was editing/publishing Five Fingers Review. That seemed less correct to me. But everyone should publish their own books, to learn the process if nothing else.

11– How do you see Woodland Editions evolving?
At the moment, the press is on vacation because I’m living part time in the UK and I’m just publishing chapbooks of my own work. I’m not sure how Woodland Editions will evolve, if at all.

12– What, as a publisher, are you most proud of accomplishing? What do you think people have overlooked about your publications? What is your biggest frustration?
I don’t think I have an answer for that.

13– Who were your early publishing models when starting out?
When I started publishing there were a whole lot of small presses in the Bay Area: Cranium Press, Zephyrus Image, Turtle Island, Arif Press, Poltroon Press, Kelsey Street. It was the end of the Vietnamese war and a lot of what we published was political. We were all friends and colleagues, and we had some great parties. I’m not sure models came into it. We scrutinized each other’s work though.

14– How does Woodland Editions work to engage with your immediate literary community, and community at large? What journals or presses do you see Woodland Editions in dialogue with? How important do you see those dialogues, those conversations?
I admit that I like to keep my conversations casual. I’m friends with a lot of people who do small press publishing, in the US and the UK.

15– Do you hold regular or occasional readings or launches? How important do you see public readings and other events?
No. Though public events and readings are important, we leave that up to the authors.

17– Do you take submissions? If so, what aren’t you looking for?
At this moment, no.

18– Tell me about three of your most recent titles, and why they’re special.
Oh, you the reader will have to do that task. I hope it’s not too onerous a one. I can only add that our books are a joy and worth every penny of your hard-earned money.