"Apologies for Ottawa" : an article and interview by Vera Grbic on the Ottawa literary community 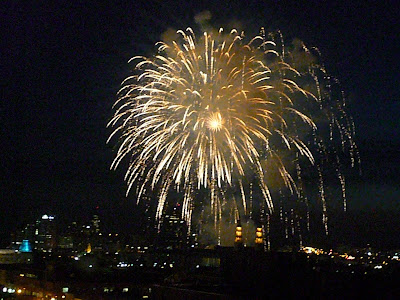 [photo of Canada Day fireworks, over the Byward Market, 2011] Last Sunday night, which would have been day three of my four-day massive move (the following day was Christine's move), I quickly answered interview questions about the literary community in Ottawa for an article that has since come out, here.

I've never understood the ongoing grief that Ottawa receives, over and over and over, and this article seems to have been triggered by yet another article by Ottawa Citizen writer Andrew Cohen complaining about how lame Ottawa is. I mean, really?

This is a wonderfully livable city, and, despite flaws with media and funding, has a thriving arts scene, including literary. If you don't believe me, check out bywords.ca, and then ottawater, VERSEfest and the ottawa international writers festival, just to begin with. What have you to lose?

Here's the little interview Vera Grbic did with me, for the sake of her article:

1. In your perspective, which organizations/hot spots for literature are centrally important for the city's literary culture? Why? I know this is a broad question and it is hard to narrow down, but I would love to get even a few examples.

Obviously, the ottawa international writers festival is a big one. I've been in Ottawa since 1989, and I'd long noticed that world-class writers, even those recognized as such across the country and beyond, had been given some strange secondary-status, simply by living here, by much of the media. When the festival was created in 1997, it really felt like the first example in a long time of a sustained respect; it was possible to have John Lavery on-stage beside, say, Austin Clarke. And why not? It was long overdue.

2 Can you describe any particular attribute that is unique to Ottawa’s literary culture?

Actually, the fact that we exist very much as a community, for one. Consider VERSEfest, our new annual poetry festival that happens in March. It's organized and run by most if not all of the reading series in the city, from slam and spoken word to more traditional verse, sound poetry and experimental writing. We not only get along as people, but manage to put a worthy festival together showcasing as many different styles as possible. It's really a magnificent thing.

For years I've been hearing that Ottawa is a transitory city, and folk don't come from here and don't stay here, but that really gets overplayed, to the point that much of the people either from here that have decided to remain, or come to the city, and deliberately stay, get dismissed. John Newlove spent his last seventeen years in Ottawa, the longest he lived anywhere (he won the GG for poetry in 1972, and was considered by many, including Atwood, Bowering and Ondaatje, to be the best lyric poet in Canada). Colin Morton showed up in the early 1980s, and remained. Elizabeth Hay came in the mid-1990s. Monty Reid showed up in 1999. These are all people who have brought enormous talent and community activity to a city that now dismisses their actions as being those of transients? It comes off as offensive, that.

3. As an Ottawa writer yourself, do you feel there is a culture of support or, in the least, a collective of literary artists one feels they can access?

I don't feel as though the city or the media support much of what happens here. We have in Ottawa, still, the worst per-capita arts funding in the country. Local media, including the Ottawa Citizen, is terrible at literary coverage. By the time they review an author's book, the author doesn't really need them anymore. I've published twenty-six books—poetry, fiction and non-fiction—in six countries, and apparently my local daily newspaper doesn't see fit to issue a single book review. Not even for the travel guide to Ottawa I did, or the poetry collection about Ottawa. I've edited half a dozen book of Ottawa-specific writing, and not a mention. After twenty years of running events in the city, I can't even get my events listed.

We're the god-damned capital city, and we are incredibly self-dismissive, as though all we are is capital, and not local. Why can't we celebrate both? When one has children, are we supposed to pretend we haven't parents? We should be embracing our unique position of being both a capital and a city with a vibrant population.

The talent is here, and the community is wonderfully supportive. But it feels as though, officially, we are being deliberately bled out.

4. Since you created Chaudiere Books - partially out of frustration that there were not many Ottawa publishers - do you find that there are now more publishers in Ottawa? If so, what does this mean for the literary community?

There don't seem any more publishers in Ottawa than there have been, but there has always been a really good amount of literary publishing in town, just not always publishers. In the mid-1990s, there were over a dozen self-proclaimed literary magazines running in Ottawa. That's an awful lot, for a city of any size. And more publishers is always good. We don't fight for the same territory, we together help encourage and create a larger territory.

5. Since you were in integral part of the reading series TREE during the late 90s, can you describe what their importance is for the well-being of the literary community?

Most writers in Ottawa could probably say that their first public reading was at the open set at The TREE Reading Series. It's the third-longest continuous (sans summer break) reading series in the country, after Montreal's Yellow Door and Toronto's Harbourfront. I ran it from June 1994 to January 1999, and during that period, it was where a number of writers came through to not only feature or hear the feature, but to exchange new works in the open set, including Stephen Brockwell, Max Middle, Sandra Ridley, Amanda Earl, Michelle Desberets, David O'Meara, Anne Le Dressay, Gwendolyn Guth, Peter Norman, John Lavery, Melanie Little, Michael Blouin, Shane Rhodes, Karen Massey and Steven Artelle. For a while, it really felt like those of us on the front line were right there, sharing and doing.

6. Is Ottawa's literary culture well-known outside of Ottawa?

Very much so! We have award-winners such as Elizabeth Hay, and movers-and-shakers such as John Metcalf. I, myself, have been touring nationally and internationally for over a decade. jwcurry has been referred to as “the best concrete and visual poet in Canada,” and the third largest collector of small press in the entire country, and since he moved here from Toronto in 1997, has been an enviable force in the city, providing material, events and opportunities for many in town that would never have been possible otherwise. Ottawa poet Pearl Pirie, even, is currently in France, launching a small publication of hers there, produced by an English-language publisher from Paris. The recent Robert Kroetsch Award for Innovative Poetry run by Montreal's Snare Books had four of ten shortlisted authors (including the winner, Pearl Pirie) from Ottawa. Our writers festival and now our poetry festival are getting quite an amount of attention. It helps, certainly, that the literary blog culture is pretty heavy here, from my own to that of Pearl Pirie, Christine McNair and Amanda Earl. Bywords.ca is where everyone finds out about local readings and other literary activities. It's almost hard not to know about what's going on here.

7. If you would like to add anything else regarding the literary culture, please do so.

What kills me about the attitude presented by that recent Ottawa Citizen article by Mr. Cohen is that it it completely follows the official line the city keeps presenting us with, that we could be a world-class city, but we are still lame. It's so easy to do that, it involves no research, but it's completely wrong. We have some of the best writers in the country here, and everyone but us seem to know it. Check out recent issues of ottawater (ottawater.com) to see just who is here, and from here. You'd be shocked.

We have the worst per-capita arts funding in the country. This is the only province without a provincial writers guild. The Canada Council a few years ago admitted they give less ground-level funding to Ottawa artists so it doesn't look bad out west (because of the money they give to the National Arts Centre and the National Gallery, which doesn't trickle down to any of us here). We have little to no media coverage for our books, or our readings. We have no creative writing programs in either university (Guelph and Regina have programs; yet we don't?), which also prevent certain writers from employment. After winning the GG award for her first book of poetry, Ottawa poet Stephanie Bolster moved to Montreal to teach in the Creative Writing Program at Concordia. Why had we no equivalent here?

In the late 1990s, the Region of Ottawa-Carleton did an official study on literary funding, and realized that the funding was so low here, it was forcing authors to move away. The official response was to reduce funding. It's hard not to see this as evidence that we are not wanted.

I am wishing I had the energy to say further. I'm on day three of a massive move (did ten hours today), so really haven't the energy. Thanks for the opportunity, though.
Posted by rob mclennan at 9:01 AM
Labels: Andrew Cohen, interview, Ottawa, Ottawa Citizen, rob mclennan, rob mclennan interview, Vera Grbic

I don't understand why Ottawa gets such a bad rep... I recently started bloggign and I will for sure make a special effort to SHOW how Ottawa is great in so many ways! twosneezeaday.blogspot.com