readings in Edmonton; the past few days (again);

I think everyone should have to go through this, every year. Until I showed up and saw what this was, I had no idea what I’d be in for. Basically, three new faculty of the English and Film Studies Department talked about what they’re currently working on now that they’re here at the University of Alberta; it was extremely interesting! Liz Czach talked about arriving here in the faculty after working for years at the Toronto International Film Festival, which was pretty interesting, and Don Perkins (I call him “new guy” now) talking about where he considers himself after finally getting full-time work, after twenty years of working sessionally!

Listening to Christine Stewart talk about working deliberately on Canadian avant-garde women poets, focusing on the works of Catriona Strang, Dorothy Trujillo Lusk, Lissa Wolsak, Lisa Robertson and a couple of others, was utterly magnificent; she talked about working her own poetic project of the detritus of Mill Creek Ravine, as she commutes under the bridge twice daily on her bike, and seeing what gets lost, thrown out or simply left behind. The two ideas were bridged through deliberate forgetting, how people and items are under the bridge, and how more progressive works in Canadian writing somehow get forgotten, even as the same writers get larger amounts of ongoing attention in the United States and England. What is it about Canadian literature that wants to forget that these writers existed or exist?

I won’t tell you about going up to RATT (the grad lounge) afterwards, where the bartender wouldn’t let me pay for drinks, or that he and his pals invited me to join their band; I won’t tell you about the karaoke that followed, or what muscles I pulled during the process. It just isn’t worth it… 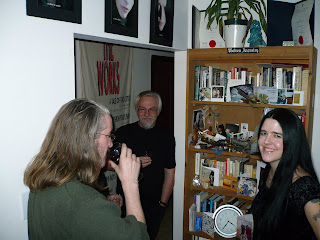 It took a while to find the place, but it was a nice, intimate venue, being Edmonton poet Catherine Owen’s living room. Musician (and new mom) Michelle Boudreau has the most lovely and compelling singing voice, and a real skill on guitar; she talked a bit about sustaining the long note, and even how, during childbirth (her Aria is 3 months old) she sustained a single note for five full minutes, making all of the nurses suddenly pay much more attention to her. I got a copy of her this room cd (2005), by her “michell boudreau band.” Photographer Paul Saturley had some very interesting work, including not just photography but digital imagery that he’s been playing with since the technology first came out around 1990, making him one of the first in the field; even cooler that of his two “slide show” presentations, both had music by his son, with one by Paul’s son’s metal band. 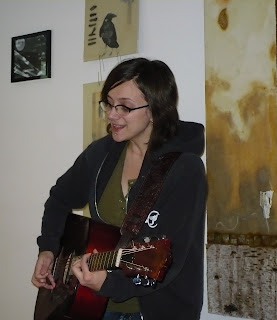 Friday afternoon, a reception hosted by NeWest Press and the Canadian Literature Centre at the University of Alberta at Leva Cappuccino Bar to celebrate Thomas Wharton’s first novel, Icefields (NeWest Press, 1995), being selected for the CBC Canada Reads 2008 line-up! Wharton’s novel was selected by Steve MacLean, Chief Astronaut for the Canadian Space Agency (I was trying to convince NeWest to put on “as read by astronauts” on the cover of the book), and was the first book by Alberta to be picked for the entire series. NeWest Press board member Douglas Barbour said a few words, and so did Rudy Wiebe, who was Wharton’s creative writing prof during the beginnings of the novel, as well as later editor of the book, and new(ish) NeWest Press general manager Lou Morin presented Wharton with a small bag of gifts, including dehydrated foods (perfect for space travel!). The event itself had a good group of friends, supporters, writers and other well-wishers, including Greg Hollingshead, Christine Stewart, Don Perkins, Jonathan Meakin, Peter Midgley (from UAP) and a whole slew of others. There was no way he wouldn’t have felt the love.
photos courtesy Lainna El Jabi