Apparently this person themselves an arbiter of what is “good” against “bad”; do I need to start reviewing book I hate? Why do I constantly have to defend what I’m doing here, that I’m simply not just “praising everything I get,” but instead trying to talk about work that I think is doing interesting things? How can anyone be an arbiter of good/bad in a way that doesn’t involve any degree of subjective personal taste (see another conversation thread that came out of a review of mine)? 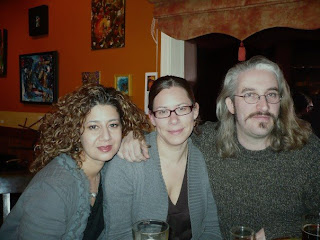 Me and my new Edmonton pals, or at least two of them; Lainna Lane and Trisia Eddy and I at George Bowering’s Olive reading [see my note on such here] in November (did you see the other photo Lainna took of me during our adventures at the West Edmonton Mall?). The three of us head out to Calgary soon for the big December 8th reading and launch!

Apparently Stuart Ross might like my novel; check out the "stack 'em Max" game we played (John got the name slightly off) we played during the writers festival; a review of Brockwell's last book that I don't think "gets it"; apparently I'm a sexy fiction writer now; a very cool photo from a very cool reading; I get memed; Marcus McCann, as a blogger, has just got more and more interesting lately; I'm in the new issue of Noon; Lars Palm loves and laments the Martian Press.

Toronto ON: While briefly in Toronto, I was able to get a copy of the second issue of Stuart Ross’ PETER O’TOOLE: a magazine of one-line poems (Proper Tales Press, September 2007). One thing that I’ve always liked about Ross’ aesthetic is that he is completely honest about where it comes from, whether giving credit to some of his writing heroes, including Toronto writer David W. McFadden (Ross recently edited McFadden’s selected poems) and American poet Ron Padgett, and now with this new venture, including a poem by (as the bio tells us), “Bill Zavatsky, of New York City [who] published Roy Rogers, a magazine of one-line poems, in the 1970s.”

A CERTAIN SLANT OF LIGHT, A STORY

Thinking about Dickinson she walked off the edge of the world. (Sina Queyras)

Ottawa ON: I recently got a box of the fourth issue of The Puritan: Ottawa’s Literary Prose Journal to give out, edited by those plucky young University of Ottawa grad students, Spencer Gordon and Tyler Willis. The issues are getting increasingly more interesting, without them losing any of the feel of the original; it’s not easy for a journal to get a good sense of self already developed by the first issue, and, no matter what improvements come along from issue to next, manage to maintain that sense all the way along. The new issue has short fiction by George Bowering, Paul A. Toth, John Moss, Brian Carr, J.J. Steinfeld, Rebecca Cuttler, Darryl Berger, Michelle Miller, Annie Zhu, Wes Smiderle, Kate Heartfield and Dayle Furlong, as well as a foreword by David Staines.

Montreal in the early ‘nineties. It felt separate, removed from Canada, its own little glamorous world. While the rest of the country wasn’t shaving their legs, wearing soft sandals and experimenting with heroin, we were making theatrical spectacles, installing art in every conceivable spot, resurrecting coffee houses, staying up all night. Francois and I would dance at the discothéques every evening, after classes and homework. We’d skip dinner to spend more time on the dance floor, eat the fruit in our drinks. The way he led me, his hips swaying, footwork impeccable. One night he told me, after he had stepped on a bigger man’s foot and a fight erupted, he told me what he did—and he made me promise not to tell anyone. (Dayle Furlong)

Be aware, too, that the writing from all four issues are available online in pdf format, which you have to admit is pretty cool.

Edmonton AB: Poet and publisher Trisia Eddy has announced her new chapbook enterprise, red nettle press, with the appearance of her own what if there’s no weather (2007). Dedicated “to bringing the work of Edmonton poets to a wider audience,” this is also a first chapbook for Eddy herself, and her poetry has some interesting moments here and there, slowly feeling their ways through playing with line breaks, rhythms and simple movement.

what’s the next letter

I like the rhythms in this short piece, perhaps one of the strongest in the collection:

traffic lights change in the distance,
amplifying the cold. the deep space

of road, disemboweled. her brow
an orange dawn, an open field:

furrowed, newly sown. the day
is skimming, a swan on the man-made

lake, trailing memory behind a
reflection of yet another architectural

wonder. but those buildings rarely
survive, replaced by newer, glossier

Back to those roads: steel-plated,
peeling aereolas of their pink.

grooved by arrivals, departure.
a train could ride those rails, bent

and occupied. slightly bold, seven
times. if only the garlic-breath

of a late-born city skyline
would snag the clouds.

What’s interesting to note, too, is that the website for her press also lists a series of other Edmonton-area literary events.

Toronto ON: Another thing I picked up while in Toronto was Stephen Cain’s chapbook Montreality B-Sides & Rarities (Toronto ON: BookThug, 2006) while dropping a whole wad of cash on BookThug items at This Ain’t The Rosedale Library Bookstore on Church Street (they even have a BookThug display at the cash).

Don’t read this
And I won’t write it down

Cain has always been one of my favourite contemporaries, and working, predominantly it seems, in sequential works in multiples of ten, so a selection of “one-offs” was, in its own way, somehow inevitable (even Bowering had his own version of “one-offs,” the collection In The Flesh from 1974). With what he’s done so far, I like the way Cain has always experimented, but almost carefully, as though he knows so much of what other experimentation has gone on before that he treads not lightly but still spare; he says little enough that you know it will always be interesting.