this cup holder? B/c yr bubbly, dummy But I feel squeeze cheese
uneasy In Fagootland coupling is at best delicate precarious &

rarefied Eggshells At worst, a snipe hunt Love in the time of
climate change Should I be nervous? No, it’s too dark in here

for that There’s light and ascreen & our moon faces, reflecting
This is an epic, dummy Get yr muse Hail Janet Jackson, patron

saint of Eternal Utility but Selective Relevance I whisper Feed-
back, feedback into the bedding Usually when you gag it’s bc 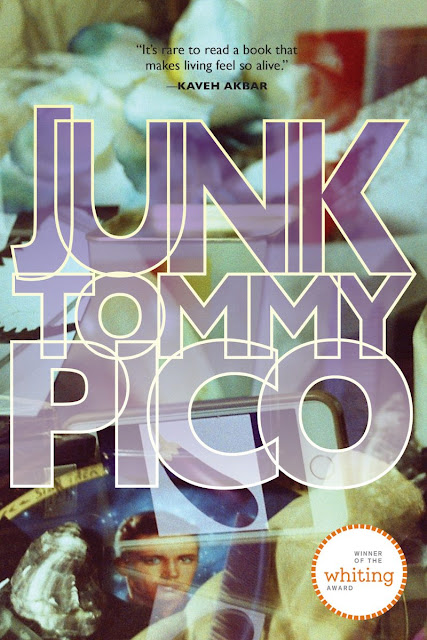 Brooklyn poet Tommy Pico’s third poetry title is the book-length accumulation/epic JUNK (Portland OR/Brooklyn NY: Tin House, 2018), following on the heels of IRL (Birds LLC, 2016) [see my review of such here] and Nature Poem (Tin House Books, 2017) [see my review of such here]. In JUNK, Pico’s lyrics move at the speed of thought, from point to point, furthering and accumulating and intricately-wrapped in observation and a sharp wit. JUNK exists as cultural critique, meditation and examination via a language that revels in making the familiar strange, twisting and turning, and including a legion of references, from Cindy Crawford and another #BadSelfie to the Indian Removal Act and Japanese Internment Camps, reveling in a perspective that is energized, politically aware and impossibly contemporary. Throughout the poem, Pico utilizes “junk” as tether, mantra, throwaway and a series of central images, set as a core to the swirling poem that surrounds. “This is where // you come to lose yrself and This is where I feel extra jagged / Junk not immediately useful but I’m still someone I can’t stop // lookin at ppl’s Junk generally so u can imagine how hard it is / at the gym [.]” In keeping with his previous work, the language of JUNK leans into a language of short-form, utilizing the language of text messages, composing a poetry that lives and breathes in an age of social media hashtags and abbreviations. Why, one wonders, aren’t more writing with this language with which so many communicate?