The individual and the entire tissue

Are the larger structures fayed into the individual en miniature, or is
only the tissue itself perverted? Does the entire tissue,

do I exist
inside myself?

In there, I move through the most common
of riddles. 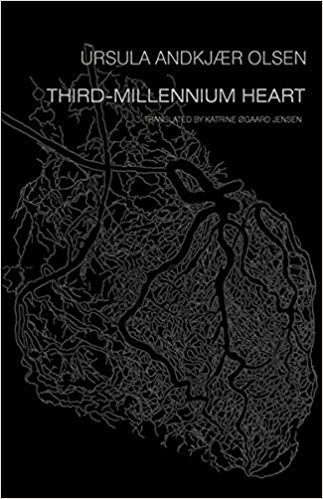 Christine and I were both fortunate enough, thanks to our ninth annual VERSeFest Poetry Festival here in Ottawa, to hear Denmark poet Ursula Andkjær Olsen read, which prompted her to pick up a copy of Olsen’s first full-length title in English translation, Third-Millennium Heart (Broken Dimanche Press/Action Books, 2017), trans. Katrine Øgaard Jensen (I had been tempted to pick up a copy, but Christine managed before I could complete the transaction). Admittedly typeset with a font that is a bit on the small side (making it difficult to read), Olsen’s is an evocative and visceral lyric, managing to be both lush and stark, lyric and precise. What kind of difference has this new, third millennium made? Her poems are fierce, pained and even savage, lyrically dense and brimming with steely nerve. As she writes: “To conquer pain, to secure victory: that is the goal. To turn my / body into stone and metal, cleave it in two and place both bodies / in their true positions, pointing east and pointing west ; bind them with strings of gold and steel to the arc of life. That is the goal.” As Jensen writes in her “Translator’s Note,” that closes the collection:

Ursula Andkjær Olsen is one of Denmark’s most important contemporary poets. A poets’ poet and a critics’ darling, she won the prestigious literary award Montanaprisen in 2013 for her poetry collection Det 3, årtuindes hjerte (Third-Millennium Heart), from a judging committee who hailed Olsen as “one of the wildest and sharpest intellects in Danish contemporary poetry.” In 2017, Olsen received the Danish Arts Foundation’s Award of Distinction with this statement from the committee: “Few poets, if any, have renewed Danish poetry in the 21st century the way Ursula Andkjær Olsen has done it.”

When offered to translate this 2014-page collection – Olsen’s first book in English translation – I was both excited and terrified. In addition to frequently inventing new words and enjoying the occasional pun, Olsen is known for her many playful references to Danish idioms and songs, as well as Norse mythology, the Bible, philosophy, and science. The most difficult part of translating her poetry, however, has to do with Olsen’s use of voice. The speaker in Third-Millennium Heart is an ambiguous character: abusive, yet a victim; fiercely emotional, yet icy and cynical. In Kritik, a Danish journal of scholarly art criticism, Ida Bencke addresses this complexity in her research article “The Body Is Something Else: Posthumanism and Cyborg Hearts in the Work of Ursula Andkjær Olsen”:

In Third-Millennium Heart, an utterly monstrous character of the body is presented to us: a heart, whose arteries and chambers lead us into complex architectural constructions and mythical castle facilities. From this hybrid body-space a terrifying female figure arises, spewing a long list of contradictory judgments and prophecies out over the Western world’s perverted civilization and market mechanisms. The work is composed of several short, out-of-breath-like texts that aggressively branch out, pointing in wild and completely different directions. As a matter of fact, the ambiguity of this third-millennium heart character is so prevalent that any reading of its intentions could be disproved with an equally well-documented interpretation of the exact opposite statement.

I am looking forward to her next collection in English, apparently due with Action Books in fall 2020.