platitudes and now, as if to say
I’m hiding inside my body,
a device rises, or the poem
appears on a blue screen; a
piece of the poem lodges itself
in my mind and I find the words:
a rectangle around me or my program,
fade out to a blue sky with clouds
bounded by chrome, a green hill rolls
and music softly chimes as if to
say welcome home, windows,
some doors open, earth or wood
floors, a circular vent, cut in
rock, a rock ceiling, a stone cover,
a knight rolled away a waylaid
jamb – at dawn it began, undone
energy escaping my house as
sound, a spark, tilting words
reading – bring wind and rain
aslant like sharp notes to the C
blasting my windows, gales
threw landmarks askew
heroic aghast, away, listing
somewhere on the internet
windmills to forgetfulness (“BROADWAY TOWER”)

Ottawa poet Jason Christie’s latest poetry title is Cursed Objects (Toronto ON: Coach House Books, 2019), “an engine / guttering low, slowing / into a cycle of haunt / and reclaim, [...].” Individually composed through both accumulation and a collage, the poems in Cursed Objects are propelled via juxtaposition, interruption and collision, eschewing lyric for a deliberate patchwork of sound, meaning and purpose, each of which are also disassembled and rearranged as needed for alternate effect. For Christie, the instability created is the engine that propels, and the folly, as he terms it, that is worth both critiquing and dismantling. Cursed Objects is built in three sections—“lèse-majesté,” “The Charm” and “a litany for [cursed object]s”— with poems concurrently constructing and dismantling throughout, writing on technology, friends and family, and buildings that might not have ever existed. “We trail our dignity from the dirt to the peak,” he writes, as part of “PETERSON’S FOLLY (SWAY TOWER),” a poem subtitled “Hampshire, England,” continuing: “we fill our pockets with sandwiches, carrots, tomatoes, and our packs with water.” As he writes to open his notes at the back of the collection:

The poems in Cursed Objects orbit the idea of objects as distinct from me, not given their characteristics or existence solely by my will, thought, or existence. Technological innovations are challenging the status of objects as extensions of my sovereignty and the arrow that pointed from me at the centre to them all around me is now pointing both ways. I am given an existence by objects, literally courtesy of medical technology, or protection from climates that would be harmful, and more subtly in the sense that in some cases I am an accumulation of data to them. I am their human. 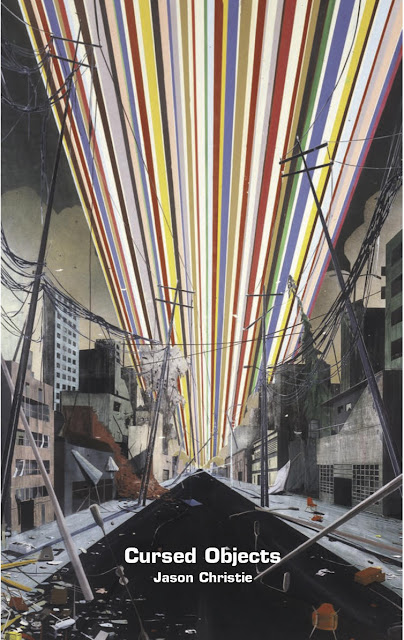 If modernism wrote the world separate from ourselves, and postmodern wrote ourselves as an inseparable part of that same world, Christie’s Cursed Objects writes the self against a world that might no longer require us, exploring technologies and other man-made creations that have developed their own trajectories, and the issues that arise with that discovery. How is it we interact with the world, with our creations, and even each other? What might remain of a world in which our creations surpass us, even turning back to their creators, shifting our own trajectories as well? As he writes to close the poem “FILE MANAGEMENT”: “skip ahead ten seconds / that is exactly it there / the moment when / we fell in love with / our capacity to store [.]” An earlier version of the poem “Ejecta flora fauna,” which now sits, revised, as part of the second section, originally appeared in Touch the Donkey #6, and was discussed as part of an interview posted on the Touch the Donkey site:

In “Ejecta flora fauna,” from a section of the manuscript called “The Follies,” I situate language into an unstable geography and instead of reeling from the instability, the shifts and pulses set language to ringing. I’m hoping there is uncertainty in the poem which doesn’t come across as full of anxiety, instead I hope the uncertainty suggests that flux and slippage are normal and natural processes, contrasted against stasis and rigidity as unnatural. angela rawlings once said to me that every time we try to freeze language, or capture it, it dances away, amorphous and whimsical. That insight has guided much of my writing and reading over the years.