AT THE MOUNTAIN WHERE HE FELL

bone-blade as the root
of separation 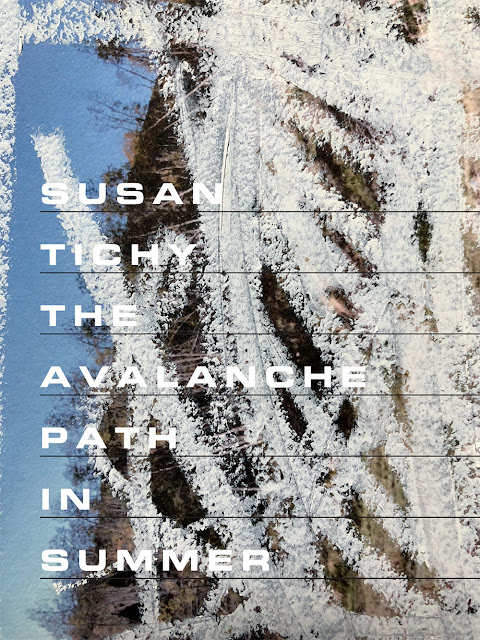 American poet Susan Tichy’s sixth poetry title, and fourth consecutive title through Ahsahta Press, is The Avalanche Path in Summer (Boise ID: Ahsahta Press, 2019), a meditative articulation of rural space. The poems that make up The Avalanche Path in Summer are reminiscent of the work of Brian Teare (who blurbs the back cover, as well) [see my review of Teare’s latest here], though their shared meditative awareness of natural space, and the acknowledgment of the erosion of that same space through human activity. Tichy’s writing is incredibly physical, dense and straightforward, from the expression of a just-shot doe, “before the blood jet, that look // of mere surprise” (“‘WITHOUT EXAGGERATION, WITHOUT MYSTERY, / WITHOUT ENMITY, & WITHOUT MERCY’”) to the opening of “EVERY STEP STUBBORN,” that reads “on a whiplash path / rockfall rain : // pump blood and lymph / through muscle, fascia // joints of the sacrum / nested, not fused // so the slightest twist / of fall, whip- // crack of spine and tailbone bends / stumbles    revises itself :” to “terrible objects / steps collected / on calm summer path / of the avalanche— // eggs of the pipit / sheep bones, eager // to ‘lay the forms / of passing clouds’” (“ARCH”). As she ends her lengthy “Author Statement,” included with the press release:

At a glance, these ideas may seem far from the projects of my earlier books, but a poem’s declared subject is less like a box, more like a vortex pulling thought and experience toward itself. Particularly in Gallowglass, images of mountain life were deposited into a matrix defined by the book’s ostensible subjects. The Avalanche Path in Summer simply reverses field and ground: instead of a book about “foreign soldiers” in which “nature” is embedded, here is a book about mountains in which injury and war are the porphyritic inclusions that define a specific conglomerate, a particular life. What does not change is the responsibility to witness. Our historical position is rare: to observe environmental change at this scale, happening not in deep time but in human time. As artists, as citizens, we must both use and endure that privilege.