Fatimah Asghar, If They Come For Us

Ullu partitions the apartment in two—
a thin blue wall cutting the deserted hall.
Toys & books on our side,

refrigerator, sink & TV with our Auntie A.
She sends us rations throughout the day & we stay
separate, not allowed to cross. I’m ten

she hasn’t left & we sit like this for hours, hands
pressed to the felt, laughing, laughing
unable to see each other.

I’ve recently been going through Chicago poet, performer, filmmaker and educator Fatimah Asghar’s remarkable poetry debut, If They Come For Us (One World/Penguin Random House, 2018), a book that explores the division of British India in 1947, otherwise known as Partition, which brokered the creation of two independent dominions, India and Pakistan. Partition not only sparked violence and chaos, but upended generations, prompting waves of immigration away from what had once been their homeland, now irrevocably divided. Asghar writes a series of deeply intimate portraits of family, from the contemporary to around the period of Partition, and linking the two in multiple direct and indirect ways. There is such an ease to her lines, composed with such a remarkable clarity of thought, and purpose, even as her poems explore some rather dark, and deeply personal, territory. This is a powerful book, especially as a debut, and one I’m surprised to see not listed as part of any shortlists. Her poems articulate the rippled effects of trauma, displacement and violence, even generations beyond the immediacy of Partition. As she writes in one of a sequence of poems with that title: “1943: famine spreads through / the British Raj. // in Bengal three million die / bones of skin, arms sharp as machetes.” In a recent interview posted online at Dazed, conducted by Dhruva Balram, they explored some of Asghar’s engagement with that history:

Fatimah Asghar: Yeah, I think history is really important to me and it’s often done away with because people don’t give history the space often that it needs, especially in America. It was important for me to say that this is something that happened. This is why, you know, these things don’t go away. They’re intergenerational. They don’t just leave. People don’t just experience trauma like this and just leave. I’ve been surprised because this is my first time doing a reading from the book that’s not in the US. In many of my readings in the US, young, South Asian people will come up to me and say, ‘I have never heard of partition’.

I feel that. Like, we’re not taught that and if you are, in my family, for example, if you bring up stuff like this, they’re like ‘yeah, that’s really painful, that’s really ugly’. 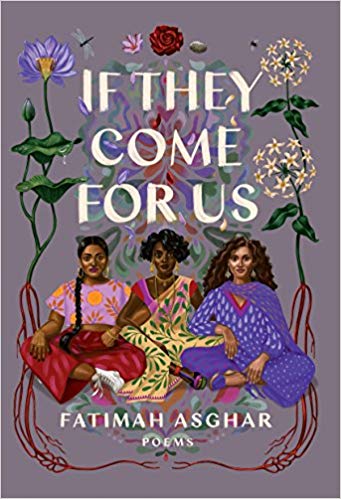 Not that this is all the book is about, as If They Come For Us explores grief, queerness and family, a well as the larger and ongoing effects of such dark periods of history, linking Partition to the contemporary climate of post-9/11 America. There is the poem “Oil,” for example, that includes:

Two hours after the towers fell I crossed the ship
out on the map. I buried it under a casket of scribbles.

All the people I could be are dangerous.
The blood clotting, oil in my veins.