before I came here I lived in the ground

therein I read the story of the artist on the mesa

her suffering formed a bloom she slid her tongue into

I saw a vast white plane in her

the window bisected the snow from below

last night of my lease can you see me

backlit by the Keurig its laser show begging us for water

if yes how whole is the form 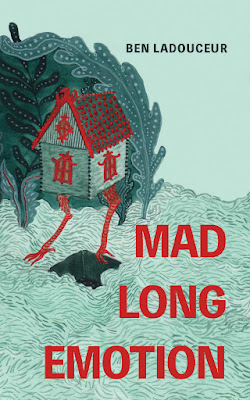 Ottawa poet Ben Ladouceur’s second full-length poetry title is Mad Long Emotion (Toronto ON Coach House Books, 2019), a book that follows his award-nominated Otter (Coach House Books, 2015). In contrast to what his title suggests, Ladouceur’s is a poetry of emotional exactness, composed via a meditative grace of humour, odd turns and observation. His lines can be meaty, thick with sound and created with a lightness that allows for a gymnastic ability to bounce, such as the ending of “ASSINOBOINE PARK ZOO,” where he writes: “All monsters on earth were once like me, / adept at love, composed // of meat, silent with ongoingness, hydraulics well-greased / with blood that stays blue, so long as you / don’t let it out.”

As American poet CAConrad suggests, as part of the back cover blurb, Ladouceur’s work includes descriptors such as “precarious,” but his poems are also incredibly quick and smart, even clever, deftly making a series of playfully quick turns and re-turns, such as the opening of “THE GREEN CARNATION,” that writes: “Fashion is currently pineapples / and sending people // home with home- / made party favours. Fashion fades, // but also, fades are in. / My barber’s students want // to give each man on earth a killer / fade, to sort the men, to make men sort // of fade away.” Really, what I appreciate in Ladouceur’s poems, especially in poems longer than half a page or so, is the pacing; how he is able to pause and stretch out before moving forward, such as this fragment of the longer sequence “Lime Kiln Quay Road,” a piece originally produced as his bpNichol Chapbook Award-shortlisted chapbook:

If everyone around you
talks funny
then no they don’t.

It’s you.
You talk funny.

So,
I talk funny.

I take a call from home
outside.
Maybe reception is better.

The wind falls into the rapeseed
in stitches.

Reception is no better.