Susan Lewis, State of the Union


This is Not a Movie

but now & then it feels like one, & often has the same symptoms. With this overload of blurred identities, it may be advisable to drag our feet through the conceptual mud, a necessity devoutly to be resisted. Unless it’s preferable to jump ship & sink on our merits, like grief-stricken elephants. Which is not to say you shouldn’t arrive at your reunion prepared with garters, buckshot, & dungarees, in case the situation goes south & you’re feeling puckish. The man in the moon may bring his husband. As acolytes they are dry, sometimes even down in the mouth, but never dead in the water. Come to mama is what they might think, if they weren’t too worn & weathered to fall for anything an order of magnitude more inviting than this insidiously tempting razor’s edge. 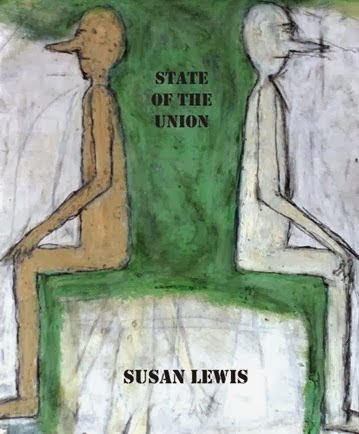 New York poet, editor and publisher Susan Lewis’ short collection of prose poems, State of the Union (New York NY: Spuyten Duyvil, 2013) reminds me slightly of Mairéad Byrne’s Talk Poetry (Oxford OH: Miami University Press, 2007), or even Anne Carson’s Short Talks (London ON: Brick Books, 1992) for their collections of similarly-self-contained brevities, composing poems in a blur-state between prose-poem and lyric essay. Lewis’ short pieces blend the prose-poem, the lyric essay and short fiction, allowing each to flow into the other in a way that makes the boundaries indistinguishable. Her title, State of the Union, suggests a unified whole of scattered pieces, as well as a stock-taking address, wherein one also speaks of what one wishes to accomplish in the future. Where is Lewis headed, and where might we stand now? It’s a big question, and one that suggests far more than answers directly. There is a wonderful quality of quick composition to some of these pieces, jazz riffs that bounce across the page, taking nothing away from the quality of composition and the sharpness of thought. This is a short collection, made up of only twenty-five pieces, each no more than a page in length, and I wonder if this work exists solely as a self-contained unit, or if it might show up down the road as part of something much larger.

In the Heat Of

this moment or another. In which nothing is its own subject, & no one bothers to attend. Unless bitten more than chewed. Or eschew false premises. Empty promise leaking breadth like aliens sapped by law, attending dejected to the song of predator & prey (+ entertain another discourse). Nerve-tip unlabeled, frail as any fledgling, feigning strength when doubt concurs. Mocked by thunderbolts & floods. While time takes our weak minds hostage & pretends to give. Holding out as gods admonish, knowing them for what they’re not.