Everyone knows that O’Hara is great, but who loses much sleep over
Pasternak?
In Russia, where the poem is still valued
as a succession of more or less beautiful lines, creation
is also regarded as the province of the Devil. Life and its regulation
belong to dumb forces, which collect at a shining point the green
translator would probably
render as God, while spontaneity erupts (to borrow a favorite Russian
image) like a fish
breaking out from the ice, flopping from the water to thrash and heave
in air. (“Toward a Theory of Translation”) 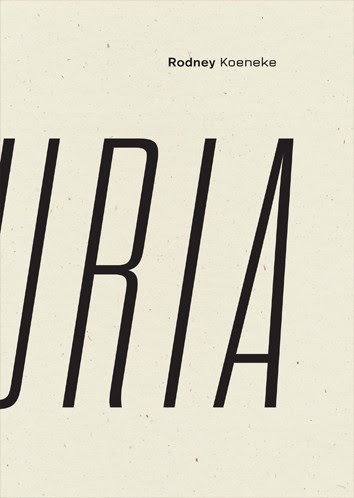 Following two prior trade poetry collections— Rouge State (Montpelier, OH: Pavement Saw, 2003) and Musee Mechanique (Buffalo NY: BlazeVOX [books], 2006)—comes Portland, Oregon poet Rodney Koeneke’s Etruria (Seattle WA/New York NY: Wave Books, 2014). In a sequence of poems that at turns feel conversational (almost in the “I did this, I did that” way of Frank O’Hara), Koeneke’s Etruria is composed around and through a series of ideas. He manages the form of the poem as a way to work through considerations of the world in short essay-like meanderings: imagine Anne Carson’s Short Talks (London ON: Brick Books, 1992), but with line breaks, and lines that extend until there is simply nowhere else for them to go. Poems such as “The Real Aeneid” read as short self-contained monologues, yet suggest that the poem might be excised from a much larger compositional canvas that doesn’t need to be written. The idea of translation appears to be the thread that holds the collection together as a single unit, even the poem “The Real Aeneid,” for example, presenting familiar information in a new form, a new language, or the poem “ghazal,” that ends with a chastisement: “Rodney, no translation is ever satisfactory— / be foreign only to its disappointments[.]” The entire collection can be considered an argument through translation, exploring the shift of words and facts into English from other languages, retelling familiar stories, and some that are explicitly unfamiliar, such as the poem “Billet-don’t,” the opening stanza of which reads:

You and your schoolmarm grammar. Me and my fake Greek.
To court me in this language of a Finnish peasant fucked improperly
at the equinox: Mieleni Minum Tekevi—I am driven
by my longing, languid as East Kansas, my teeth grow soft
like Chicklets, sad casualties of night.

The title poem at the end of the collection, as well as the title of the collection itself, references the ancient home of the Etruscans, located in what is now central Italy, highlighting a further tension in the collection between what was, and now what is, and what gets lost in the “translation” of telling and retelling, until what was once known isn’t recognizable at all. Koeneke opens the collection with a quote from D.H. Lawrence’s posthumously-published collection of travel pieces, Etruscan Places (1932): “Far more probably, the city itself lay on that opposite / hill there, which lies splendid and unsullied, running / parallel to us.” The collection provides a compelling collage of movements, translation and explorations through perceptional shifts, retellings and clarifications, such as the opening lines to the poem “Tristia,” that reads: “Go, little book, to her, where I can’t enter / and serve as her doorjamb, or bookshelf prop, or coaster / or a clean spot on the floor for her to drop[.]” And yet, the title poem, perhaps attempting to pull everything together at the end of the collection, feels unnecessarily overloaded. Despite the strength of the rest of the book, the poem “Etruria” somehow provides a looseness that wanders a bit too much in parts, losing the thread of the poem, the ending of which reads:

Wars gets forgotten and are replaced with new ones,
disaster is palimpsest to modernity’s radiant texts.
Then we become precipitations of our speech acts,
extensions of form, Etrurian courtiers fanning this phenomenal
with the soul’s broad palms, whose flats
and pronouncements got so shrill and boring
in its sick years, before we contrived to invert its astonishing structure
and put the nose back squarely before the Sphinx. Now everyone’s
relatively happy, with lots of theoretically interesting things to say about
just about everything. Capitals invoke letters and cities,
theaters are redolent of pretense and of wars.
I think we’re more comfortable with not always being rational
despite the unsettling sense that Reason is on the march somewhere
like History and Progress and Science and time
advancing on the Bourbons of Etruria,
drunk drunk drunk drunk drunk drunk drunk.