There’s a strange quality to Newfoundland writer Stan Dragland’s lyric essay Deep Too (Toronto ON: BookThug, 2013), a book that exists in the striking creative non-fiction blur between essay and memoir. Composed in self-contained fragments that accumulate, the book opens with a dick joke, and turns into a prose exploration of dick jokes, movies, bathroom stalls and the competitive male swagger, while bringing in references to Sling Blade, Margaret Atwood, The Man Who Shot Liberty Valance, Lyle Lovett, Dr. Jekyll, Thomas Hardy, Doctor Faustus, The Brass Rack, George Bowering, Rwanda, the Man from Nantucket and Out of Sight, among others.

Maybe this started off as a riff on the joke in Sling Blade. I hadn’t yet seen the film, so I made no connection. I could now, but then I just thought, well, deep & deeper – here’s a civilized philosophical discourse, & it means a much higher literary standard than most material found in a Men’s. A lot of that stuff comes from well south of Nantucket.

I chuckled to myself, then rejoined my table-mates & recited what I’d read. One of them confessed to writing it – he & a friend. How tiny is St. John’s, anyway, you ask. Well, comes the answer, I’m always running into people I know in vaster Toronto, so let’s just say Coincidence Rules. 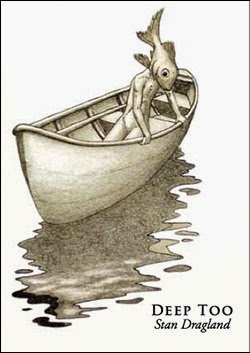 Dragland has long been one of my favourite non-fiction writers, exploring literature in such a way that one can’t help but be immediately drawn into his ever-expanding conversation, sharp observations and lyric connections. Through bringing in such a range of references and stories, he manages to make incredible connections and observations that would have been impossible any other way. Previous of his titles that have struck to the point of rereading some half dozen times or more include Journeys Through Bookland and Other Passages (Toronto ON: Coach House Press, 1984), Apocrypha: Further Journeys (Edmonton AB: writer as critic series, NeWest Press, 2003) and the more recent Stormy Weather: Foursomes (Toronto ON: Pedlar Press, 2005). Structured in three parts (“There was no Part 2 until my buddy Phil Hall read down to the sausage & said, ‘I think this has somewhere else to go.’”), Deep Too manages to be conversational, critical, meandering and straight to the point, presenting an easygoing and complex exploration of something most others would have easily dismissed out-of-hand. What appeals about this small essay/memoir, as in much of Dragland’s critical work, is in how he doesn’t provide over answers, but a series of directions, slipping answers, queries and other observations quietly in. “‘They’re all the same size,’ Beth says. I have the feeling that she & her cohort of feminists were counselled to say that to their men. If you’re going to consort with males at all, they’d have been warned, be very aware that they’re highly sensitive about size.” Close to the end, he includes a poem by Laura Apol, a volunteer worker in Rwanda, who composed a poem-as-memorial from some of the savagery she witnessed during and after the genocide. What has this to do with a dick joke? Possibly nothing; you might just have to read the book to find out. Dragland writes:

The poem ends with an admission: people like Laura, like me, are privileged. We may choose not to look. If we do, we can still head home to Arkansas or Michigan or Newfoundland & put what we’ve seen behind us. Retreat to what Laura elsewhere calls “the amnesia / I call home.” But she & I know Atwood is right. Someone has to see things so shocking that, even in the encounter at second- or third-hand most of us want to turn away. “Try not to resist the third eye,” she says, “it knows what it’s doing. Leave it alone and it will show you that this truth is not the only truth.” That much we know, though it bears repeating. And the reward for non-resistance? “One day you will wake up and everything, the stones by the driveway, the brick houses, each brick, each leaf of each tree, your own body, will be glowing from within, lit up, so bright you can hardly look. You will reach out in any direction and you will touch the light itself.”

My heart rises to that. It leaps at those living words for a clarity and a faith I haven’t achieved & never expect to.

Posted by rob mclennan at 8:31 AM
Labels: BookThug, Stan Dragland