Between classes I haunted the vault of the University of
Calgary archives where I worked as a grad student.
I lingered, always, by the first editions of Plath and Sexton.
Like a luck charm I’d run my finger along the tip of a
badger’s whisker that Ted Hughes taped into a hand-stitched
chapbook shelved next to an early edition of The Colossus.

One day I will run my fingers along the marbled spine of
the box at the Lily Library that contains Sylvia’s hair shorn
in childhood, hair that never felt Ted’s brute fingers.
I wonder if Ted plucked those whiskers from a badger
in the wild, its thick musk like Sylvia’s heavy memory.

But no, Ted couldn’t touch a woman without cowering in
his study, never mind a wild animal. He always did like to
pluck bits and pieces from the dead as they lay helpless. 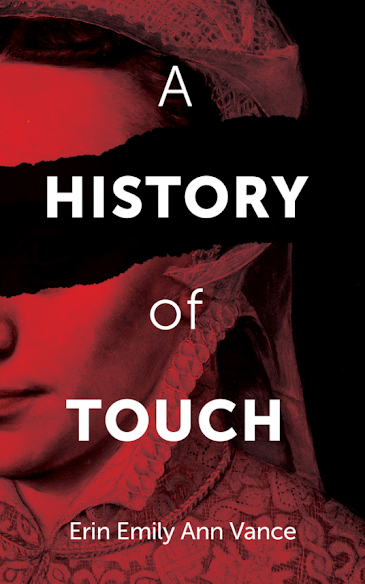 From Erin Emily Ann Vance, a Canadian writer currently studying in Ireland, author of the novel Advice for Taxidermists and Amateur Beekeepers (Edmonton AB: Stonehouse Publishing, 2019) as well as a handful of poetry chapbooks, comes the full-length poetry debut, A History of Touch (Toronto ON: Guernica Editions, 2022). The poems that make up A History of Touch are constructed as curious breath-phrases, each line built to articulate rhythm on the page, each line break offering where the breath might stand. Her poems exist as short narratives, little lyric stories in the form of poems, that, as the back cover offers, “explore the natural, the supernatural, and the in-between, interrogating the position of the female body in folklore, pop culture, and history.” “Earliest memory: mother in coffin,” she writes, to open the poem “HAT BOX,” a poem dedicated to Lucy Maud Montgomery and her loss, due to a son stillborn, “the tubercular bed I grew in. / A haunted wood: I thought the birch / was the monarch of our forest / but it was mother’s grave that ruled. // In the fairy room I split in two, / by Maiden Lake I became a tree.” She writes of witches and mysteries, matrons and mothers, stillbirth, kittens, rabbits and silk; she describes a darkness of dolls, the institutional life of Rosemary Kennedy and the photographs of the Cottingley Fairies, and it wouldn’t be hard to see how the poems collected here directly relate to her time as co-host of the folklore and history podcast Femmes Macabres. Vance writes the stories of women who were maligned by their cultures and communities, from being sentenced to death for witchcraft to being dismissed as difficult or hysterical, and examining the depictions of these women and their surroundings. As she writes in “The Purported Last Words of Ruth Blay,” telling the story of a woman executed by hanging in the Province of New Hampshire, 1768, after being convicted of concealing the body of her stillborn illegitimate child: “Don’t let my students watch, don’t / let the girls see. I haven’t yet / taught them what it means to be // a woman.” Further on, adding: “Let them live quietly / for now. I’ll visit them in their dreams, / tell them of this pain when they are ready.”
Posted by rob mclennan at 8:31 AM
Labels: Erin Emily Ann Vance, Guernica Editions