Mikko Harvey, Let The World Have You

We like to describe the heart as heavy
when it’s more like an old wolf
gone hungry, wondering
why bother restarting the hunt?
Then a rabbit emerges from a hole in the dirt
and everything forgives itself for just
continuing to exist. What’s your moon
sign? What’s your Myers-Briggs
personality type? Never mind, doesn’t matter.
Or, okay – does matter, but matters less when we nap
side-by-side in this grass, the whole field
so American, all of our kings
somewhere else recovering
from microdermabrasion,
our personal wolves
playing around in the brook together under
our imprecise supervision. 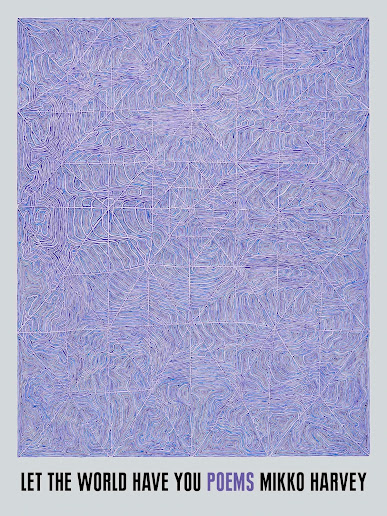 The latest from poet Mikko Harvey, following the full-length debut, Unstable Neighbourhood Rabbit (Toronto ON: House of Anansi, 2018) [see my review of such here] and collaborative chapbooks Idaho Falls (with Jake Bauer; SurVision Books, 2019) and SkyMall (with Ashley Yang-Thompson; above/ground press, 2020), is the full-length Let The World Have You (House of Anansi, 2022). A Canadian poet living in Western Massachusetts, Harvey predominantly composes poems in first person lyric narratives that float across the boundaries of concrete image. “Wherever you are is a country.” he writes, at the mid-point of “Wind-Related Ripple in the Wheatfield,” “Touch it softly / to make it stand still. Your hair getting caught / in my mouth all the time, like a tiny piece / of you calling – like a tree trying to speak / to a rock by dropping a pinecone on it. / It is my intention to listen, but my hands / keep giggling while reminding me / I don’t get to be a human being / for very long, as if this were the punchline to a joke / whose first half I missed. I arrived too late.” There is an odd melancholy throughout, and Harvey’s is a lyric of held breath, and structurally echo a loose thread of lyric narratives I’ve seen over the past few years from American poets including Bianca Stone, Hailey Higdon, Hillary Gravendyk, Emily Kendal Frey and Emily Pettit: sharing a consideration for long, single stanzas, and their subversion of the short phrase. “I don’t / want you / to be / nervous.” He writes, to open the poem “For M,” “Maybe / thinking of / a walrus / would help.”

He writes on small intimacies, from a butterfly landing once on someone’s nose, to visits to a doctor (this comes up more than once), writing subplots, movements and reactions, and seeking patterns out of what otherwise one might never think to connect. Writing of guinea pigs enduring scientific progress in the poem “Autumn,” he offers: “I was at / the café the other day / with my friend Lexi / when she mentioned, offhand,  /she wished she could be held / by a lover the way time / itself held her. What / would you make of that, / dear pigs, if you could think? / I myself didn’t think to ask / because I was nervous and / over-caffeinated, but I think / she was referring / to gentleness, and possibly / acceptance, which are states / humans tend to crave, / believe it or not, / though we are not so good / at actually attaining them.” Throughout, Harvey’s poems exude a softer shade of surrealism than, say, the work of Gary Barwin or Stuart Ross, and one more fluid, offering a shimmering edge to an otherwise lyric of narratives that ease from straightforward into liquid, writing a document of uncertain times. “How best to commemorate / my role as witness of this moment?” he writes, as part of “MEAN BUTTERFLY.” “I could take a picture.” There is a melancholy, as well as an unease, threading through short scenes and quiet intimacies, as Harvey’s poems occasionally suggest an experience that is hard-won, with small wisdoms offered as lessons, prompts or even warnings. Later, in the same poem, ending: “There is not a single path forward / that’s painless.”

Posted by rob mclennan at 8:31 AM
Labels: Anansi, Mikko Harvey