so much empty space

the frame wrung out

the length of a needle enters the body

Following years’ worth of chapbooks (through In/Words, above/ground press, Apt. 9 Press, Puddles of Sky Press, Baseline Press, The Emergency Response Unit, etcetera) comes Ottawa poet, editor and small press publisher Cameron Anstee’s long-awaited full-length poetry debut, Book of Annotations (Picton ON: Invisible Publishing, 2018), a collection of what Nelson Ball calls “minimalist gems”: incredibly short and playful poems packed with enormous density. Part of the appeal of such a collection emerges from his engagement with (and obvious love for) similar works by poets working in similar veins, something acknowledged on the back cover: “a dialogue in shorthand with H.D., Nelson Ball, Lorine Niedecker, Aram Saroyan, Phillis Webb, Robert Lax, and others.” Others, I suspect, might include Mark Truscott, jwcurry, Michael e. Casteels, Gary Barwin and bpNichol. 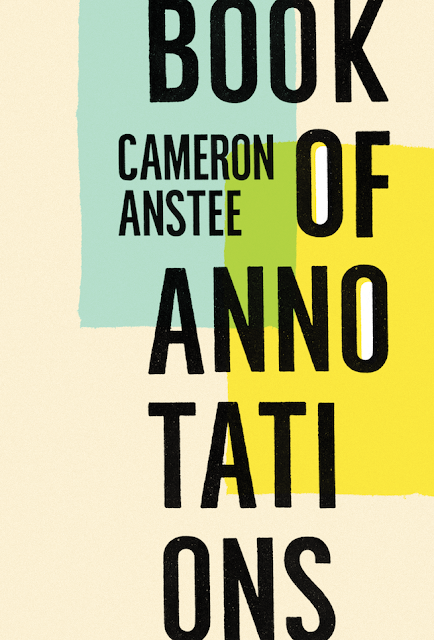 Structured in five untitled but numbered sections, this too furthers the minimalism of Anstee’s poems, allowing the reader to see the connections between and amid poems, some of which is obvious, deceptive and quite subtle, in poems built on erasure, repetition, hesitation and the quiet pause. There is such deliberate care to these poems, crafted and sculpted and incredibly small, some as deliberate as a single word. It has been curious to see more than a couple of contemporary poets over the past few years explore just how small a poem can be, some of which were solicited by Stuart Ross for his poetry journal Peter O’Toole: The Journal of One-Line Poems (Proper Tales Press), but Anstee’s is obviously an ongoing interest. In an interview on the collection recently posted on the Invisible Publishing blog, Anstee speaks to the origins of his interest in the minimalist poem:

I’d been working on poetry for four or five years when, in 2008, I took a course in Canadian Long Poems of the 1960s and 1970s with Rob Winger at Carleton University that sparked a turn to the minimalist. This seems odd, but it was the first place that I encountered Phyllis Webb’s Naked Poems, a book that radically realigned my thinking about poetry. I’d always been drawn to small poems, but more often than not there would be only one or two small-ish poems in a book-length collection. To encounter an entire book built of small works (albeit, a long poem of connected small works) was something of a revelation. In the years that followed, (ten years more or less to the day since that course ended) I gradually wrote more and more small work, finding myself able to let go of composing what I thought poems were supposed to look like (single-page fairly dense blocks of text) and instead, embracing the small as a compositional challenge and choice. In one of those nice events the universe lets you have from time to time, Rob Winger very kindly edited Book of Annotations, bringing the last ten years of this work full circle.