Here, the thinking is decorative, breathing out of range in myth. She is the deep blue quiver of its aftermath. Balance the ledger, tally the debt, it’s strobe-lit and coupled. He slips like her hand through a paper mantel, foresees its various symbols. The swerve of too-narrow wrists. Small alcove of sleep where his grace uncoils and her skull cracks golden fever. Reluctant mother tongue, electric. She knew the bruised lilacs on his spine were from hiding—back up against the surge. She approximates the refill. Follow his hands in laying bricks, the perfect grammar of their fortress. Her trances are an affliction, a self-portrait and its silhouette. Shrink the cell, she warns. The flame in his throat, an eviction, a brimming meant for mining. Each morning blurs its translation. Here, she is the wet fold of drowning.

After far too long a wait comes a second trade poetry collection from Toronto poet,editor and critic Suzanne Zelazo [see my 2015 Jacket2 piece on her here]—Lances All Alike (Toronto ON: Coach House Books, 2018)—following her debut, Parlance (Coach House Books, 2003). Not that she has been idle or absent, having held a three-year postdoctoral fellowship at Ryerson University under Irene Gammel, exploring experimental writers and poets including Mina Loy, Elsa von Freytag-Loringhoven and Florine Stettheimer, and co-edited, with Gammel, the critically-acclaimed collections Crystal Flowers: Poetry and a Libretto by Florine Stettheimer (Toronto ON: BookThug, 2010) and Body Sweats : The Uncensored Writings of Elsa Baroness von Freytag-Loringhoven (The MIT Press, 2011). As Parlance emerged from Zelazo’s readings of and research into Virginia Woolf (specifically, To the Lighthouse), Lances All Alike emerges from her work on Loy and Freytag-Loringhoven. As she writes to open her “Notes” at the end of the collection:

In a prescient essay on the artist Joseph Cornell (1903-72) and his assemblage boxes, Mina Loy considers artistic influence a form of collage: ‘This appropriation of others’ handiwork is not pilfering, but lifting out of the past another’s sight tinged with family likeness – aspects added to the original by the altered observation of modern eyes.’ This is the spirit in which I ‘appropriate’ the work of Loy and the Baroness, as well as that of Joyce and Faulkner. Specifically, the collection explores lines of influence and collaboration; I believe that when we read and write, we bring with us the imprint of everything that has ever moved us, thus we do so always as a collaboration. 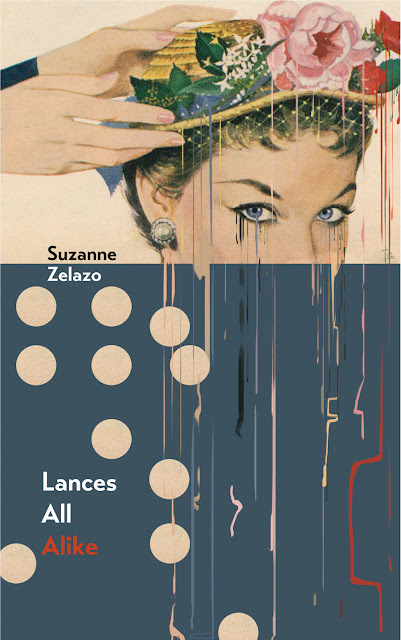 Collage is very much in play here, and Zelazo’s poems move at a remarkable speed, in large part due to the condensed and specific language, as she writes in the poem “Blue Notes”: “There’s nothing more beautiful / than your eyes closing over our uprising, / finger raised in silence / complicit in the resonance.” Cerebral and sensual, the poems collide, collude and fractal, often moving in multiple directions simultaneously. To highlight her composition of carving and reassembling, the four groupings of poems are numbered excisions: “EXCISION 1: The Bisected Poems of Mina Loy and Baroness Elsa,” EXCISION 2: Engendering Exiles,” “EXCISION 3: Sutured Portraits” and “EXCISION 4: As I Lay Sighing.”

Zelazo’s collage-poems explore the potential collisions and collusions between two wildly individual contemporaries that, supposedly, and bafflingly, might not have interacted during their lifetimes. In an interview posted at Touch the Donkey in 2015 on the project, then still in-progress, Zelazo explained: “The poems are characteristic of what I’ve been working on for a while now— a modernist conversation between the Baroness Elsa von Freytag Loringhoven and Mina Loy, and a more general consideration of artistic influence. […]  As in my first book, collage is central, but I think the collection explores voice—the simultaneity of voices—very differently.” It’s curious to see Zelazo’s ongoing exploration of female modernist writers, engaging the intersections between Mina Loy and Baroness Elsa, even as her first collection explored (less blended than this current work, but still seeking points of common entry) the work of Virginia Woolf against an elegy for Zelazo’s late mother. She might be engaging in modernist conversation, but through a postmodern lens, reassembling the narrative through fractal, clipped fragment and deliberate obsfucation, thus opening up the possibility of entirely new directions in the narrative; influenced by, as Sina Queyras suggested in a note on Parlance in 2005, collage-and-chance poets such as Jackson Mac Low. In the same interview, she continued:

For both Loy and the Baroness, collage enabled a dispersal of self, predicated on language as embodiment. Both women daringly redeployed the art form to critique the conventional sexism and pro-war sensibilities which the masculinist avant-garde disseminated. This collection stages an imaginary, sustained conversation between the two poets who in spite of numerous aesthetic resonances and common artist friends (notably, Djuna Barnes and Marcel Duchamp), never engaged with one another. There is no record of any exchanges between the two poets. Their non-relationship thus figures as a curious “absent presence” in modernist cultural history.