When one enters a room one becomes its audience. One audits its dimensions, decides whether to reverse the dynamic or keep it. If one keeps it one remains that most mysterious of facts: a furnishing. One sits in a corner & one reads, deity. If one reverses it one turns into that most gratifying of agents: a speaker. One expends energy, loses one’s reserve. The most minimal sculpture is a rock. The work of privacy is maximal. Look at this, draw some curtains, exit. (“PROSPEKT”)

Poet, editor and translator Aditi Machado’s debut full-length poetry title is Some Beheadings (New York NY: Nightboat Books, 2017), an extended lyric suite constructed out of a dozen sequences of poems, fragments and accumulations. Machado’s lyrics are meditative, even philosophical; expansive and gestural, writing a particular flavour of intimacy blended with abstraction that connects, deeply, as she writes in the poem/section “PROSPECT”: “I am thinking now to describe what it’s like to touch something. / What it is to rub off on someone.”

Like a street I become
as I walk it, the agent of walking
as if blood on the lip, a kind
of hunting in which one eats
prior to capture, I perceive
an arrow, the arrow turns in
on itself, o complex
presentiment. How long before
I walk into the sea remembering
what the kelp felt like: like felt.
I think a line into the future
but on the sidelines history
is pressed along its pleats. I think
the period is a decimal point,
I dare not be more precise. I think
I’m not human, I’m grammarian.
there was a future, the future
passed. So a will was there,
now there isn’t. 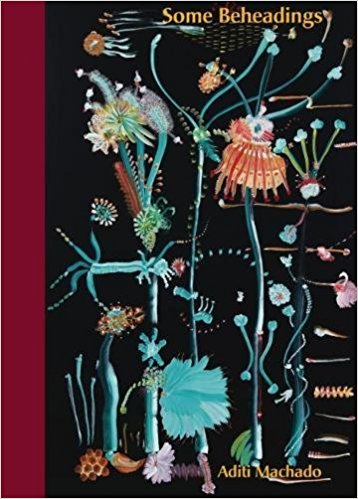 Hers is a collection that writes on the body, including the dismembered body, separating head from the torso, separating the physical body from the life of the mind, as she suggests in her response to Zach Anderson in an interview over at American Microreviews and Interviews:

In hindsight, all that you say about the acéphale is apt to Some Beheadings, because I read Bataille plenty and he’s seeped in. When I was rewriting early drafts and putting the different texts together to make the book, I started noticing a number of decapitations and dismemberments—they are not so obvious, since not, I think, gory—and began to realize both that this needed to be reflected in the title of the book and that clearly I’d been working out, in the poems, some very rudimentary and not at all new thoughts about how the body is also a mind. I feel the thoughts get fleshed out (no pun intended) better in poetic form. So, for example, in one poem, the speaker is walking through a weedy landscape and “[a] decapitation, a lovely guillotine wind lays [her] mind / in the weeds.” And I think this is an image for a type of thinking where the head has been displaced in the conventional hierarchy as the seat of the intellect. It’s down in the earth, more like a sense organ, feeling the ideas/plants rather than simply thinking them—which I should hope is impossible anyway. So I guess it’s a kind of headlessness that makes the body open (even brutally open) but maybe the head is also around, just not “on top of” the body.