Barking & Biting: The Poetry of Sina Queyras, selected with an introduction by Erin Wunker

Thus far, twenty-first-century poetics has been preoccupied with two ongoing conversations: the perceived divide between lyric and conceptual writing, and the underrepresentation of women and other nondominant subjects. While these two topics may seem epistemologically and ethically separate, they are in fact irrevocably intertwined. Questions of form are, at their root, questions of visibility and recognizability. Will the reader know a poem when she sees it? And will that seeing alter her perception of the world? And how is the form of the poem altered, productively or un-, by the identity politics of its author? (Erin Wunker, “Of Genre, Gender, and Genealogy: The Poetry of Sina Queyras”)

The future at a hundred miles an hour, mouths stretched like windsocks. I hate your seamless layers, you know that, but you scratch by, and I am thinking of all the Trojan horses this bay has seen, eleven of them now, bobbing in the harbour, containing who knows what army of product.

Unbelievable views, never did take them for granted. There is a spot just outside the pillar and glass where, when you stand in the pea gravel and whisper to me, standing where I am standing by the totem at the edge of the continent, we can hear all the dead ones singing. (“‘Water, Water Everywhere’”) 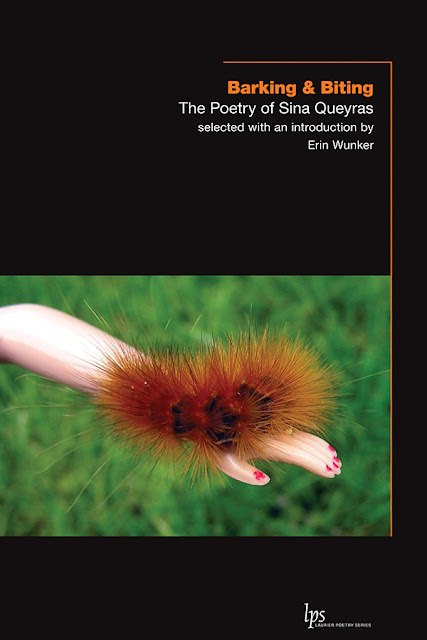 The poems that make up Barking & Biting: The Poetry of Sina Queyras show outspoken Montreal-based poet and critic Queyras—author, as well, of a collection of critical prose, Unleashed (Toronto ON: BookThug, 2010) and the novel Autobiography of Childhood (Coach House, 2011)—to be deeply engaged with a poetics in constant flux, and one that works to engage with identity politics, as well as the divide (both real and imaginary) that exists between lyric and conceptual writing. Her writing has long been known for both a pervasive restlessness and an engaged ferocity, and one that has little patience for half-measures. Queyras engages Sappho, Virginia Woolf and Gertrude Stein in the same breath as she might also speak of Mary Oliver, Lisa Robertson and Vanessa Place, and the breadth of her view somehow manages only to focus her attention. As critic and editor Wunker writes in her introduction: “Queyras’s poetics pay dogged attention to questions of both representation and genre. In each of the collections of poetry she inhabits tenets of the traditional lyric, while also leveraging the genre open and letting conceptual in.”

One of the benefits of such a collection, even by those already familiar with Queyras’ work, is in the reminder of just how powerful her writing is, pushing to constantly challenge boundaries, margins and safeties. If you read nothing else, be aware that the longer poem-essay “‘Water, Water Everywhere’” is perhaps the finest example of everything Queyras is doing and has done, all set in the space of a few short pages, writing:

I read Mary Oliver’s poem about angels dancing on the tip of a pin and I kept thinking, She is writing about a penis, Mary Oliver is really a gay man and everything is about AIDS, which made me want to carry Mary Oliver in my pocket.

I could think of no finer way to close such a collection than Queyras’ “Lyric Conceptualism, A Manifesto in Progress” (interestingly enough, Queyras is not the first poet in the series to close their collection with a piece more in the shape of a poem than straight prose), reinforcing the notion that hers is a poetics that continually adapts and re-thinks, refusing the fixed point, and willing to constantly be learning. The idea is reminiscent of Jay MillAr, who, after the appearance of his anthology Pissing Ice: an anthology of new Canadian poets (Toronto ON BookThug, 2004), an anthology constructed in part as a more experimental/avant-garde response to some of the more formally-conservative anthologies of Canadian poetry that were appearing around that time, resisted composing a fixed introduction or “poetics.” One can’t set down, easily, if at all, a moving target. As Queyras writes in her end-piece:

Lyric Conceptualism imagines herself a boat, fluid, without handles, able to slip through definitions, anchor at will.