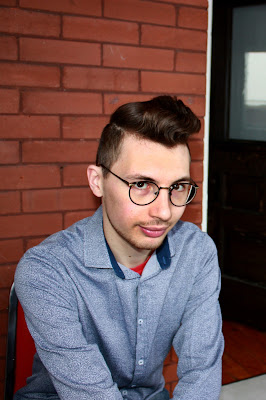 John Nyman's verse, visual, and conceptual poems and poetics have appeared in a variety of print and online publications including Rampike, (parenthetical), Cordite Poetry Review, and Hamilton Arts and Letters. His debut collection of poems, Players, was released by Palimpsest Press in April 2016. Originally from Toronto, John is currently completing a PhD in Theory and Criticism at Western University in London, Ontario.

1 - How did your first book change your life? How does your most recent work compare to your previous? How does it feel different?
Players is my first book, and not much has changed yet. Except that I seem to spend more time writing emails.

2 - How did you come to poetry first, as opposed to, say, fiction or non-fiction?
I actually came to poetry second, thinking at first that I’d find my way writing short stories. What attracted me to poetry, though, was its apparent openness to experimentation: I wanted to test the limits of language, and I considered poetry the best platform for doing so. I’m much more skeptical today about the extent to which poetry actually has this power, but the idea still informs my writing to a great degree.

3 - How long does it take to start any particular writing project? Does your writing initially come quickly, or is it a slow process? Do first drafts appear looking close to their final shape, or does your work come out of copious notes?
My answers to all of these vary depending on the poem in question. In a sense, I try to never pursue a project the same way I’ve pursued another one.

A handful of poems in Players came out of pretty memorable compositional processes. For “Naked Baby,” I started with a sort of bestiary of words that had the visual and sonic shape I wanted to represent the scene, then constrained myself to using only those words in the poem. “Myself as a Dictator” was written in a similar way, although my vocabulary for that piece was sourced from Hannah Arendt’s The Origins of Totalitarianism. My working notes for “Love Song for Kazoo” are probably the strangest: while I had originally been experimenting with writing interlinear additions to rap lyrics, over the course of a few drafts the additions drifted from the source material and became the first stanzas of a love poem.

4 - Where does a poem usually begin for you? Are you an author of short pieces that end up combining into a larger project, or are you working on a "book" from the very beginning?
For me, poetry is less about creation or craft than it is about invention: my poems usually begin with the question, “Can this be done?” Often, it doesn’t take much time or space to answer this question. But occasionally it takes much more. Some of my projects, especially my visual and conceptual projects, have ended up demanding monstrous amounts of repetitive, detail-oriented labour to become realities. Invention works on a timescale that has little to do with human life’s.

5 - Are public readings part of or counter to your creative process? Are you the sort of writer who enjoys doing readings?
Part of, and yes. I’ve learned a lot from attending readings, reading my own work publicly, and using readings as a platform to try things I’ve never seen anyone do before. Mostly, though, I just like to talk, and I don’t mind talking in front of others.

On the other hand, I also believe that written and spoken poetry are two different genres of art—probably more than two, actually. I enjoy them both because, in my case, their variance activates my creativity.

6 - Do you have any theoretical concerns behind your writing? What kinds of questions are you trying to answer with your work? What do you even think the current questions are?
Yes, many. And I’m not proud to say I spend a lot more time thinking about them than I do writing.

One of the bigger questions is a familiar one, a cliché: What can words do? Over time I’ve come to believe that this question doesn’t mean much outside its particular instances, which is why I try to write.

Another question I’ve been preoccupied with lately: What does it mean to be small, or to have a small voice? I’ve heard a lot of poets describe their project as an affirmation or restoration of humanity, in a very broad sense. Personally I think this aim is silly, considering that we’re living in a world in which non-human forces—digital computation, techno-science, capital—are increasingly demonstrating they can get along fine without us. But I think it’s equally silly to turn around and proclaim an entirely post-human poetry—for example, a poetry written for the robots or aliens that’ll come to populate the future—as if humanity were in a rush to disappear. The significance of humanity, like that of poetry, is shrinking—shrinking, but not zero. If poetry has anything authentic to say, it might be about that.

Finally: It can’t be acceptable for a writer like me (white, male, straight, the list goes on) not to be concerned with the question of how to account for the exclusivity and normativity of poetry, the literary tradition, and the avant-garde—in short, of the cultural authority to claim to have something significant to say at all. I don’t have an answer to this question, though I could point out any number of people I think are doing it wrong. Perhaps most importantly, I don’t believe anyone can justify the premise that maintaining their own creative practice could only help solve the problem, that they should at least ‘keep writing’; there is nothing necessarily ethical about persistence, about equal representation for every individual who raises their voice, or even about expressing oneself in general. If I have not already done harm, as a writer (especially a publishing writer) I at least risk doing harm.

8 - Do you find the process of working with an outside editor difficult or essential (or both)?
I love it. I love the idea of my poetry being less ‘mine,’ and I love to learn about myself from others. The more editors, the better.

9 - What is the best piece of advice you've heard (not necessarily given to you directly)?
About writing: I’ve overheard any number of gnomic statements about the percentage of words that should be cut from a first draft, ranging from the numerically reasonable to the practically absurd. My impulses point toward the absurd.

In general: My answer is probably somewhere in the disputed borderlands between my Dad’s advice—“be good”—and my public school multiculturalist TVO Kids childhood’s advice—“be yourself.”

Finally: An out-of-context, untranslatable sentence fragment of Derrida’s: “all is not to be thought at one go.”

10 - How easy has it been for you to move between genres (poetry to critical prose)? What do you see as the appeal?
1) Very easy. No one spends their whole life speaking just one kind of language.

11 - What kind of writing routine do you tend to keep, or do you even have one? How does a typical day (for you) begin?
Very recently, I’ve worked up a habit of free-writing lines for my houseplants while listening to news radio, first thing in the morning. But over the years the only routine I’ve kept up consistently is eating breakfast every day, and I’m still not convinced that it isn’t a detriment to my writing.

12 - When your writing gets stalled, where do you turn or return for (for lack of a better word) inspiration?
I don’t take an active approach to it. Perhaps I won’t write anything for a few months, then I’ll think of something new and it’ll lead me to writing. Sometimes I fantasize that one day I’ll stop writing all of a sudden—like a premature death—and never return to it. The thought doesn’t scare me.

13 - What fragrance reminds you of home?
Cigarette smoke (for my childhood home) and laundry detergent (for home now).

14 - David W. McFadden once said that books come from books, but are there any other forms that influence your work, whether nature, music, science or visual art?
In strict terms, I rarely write about or after books, at least consciously. For me the upshot of books is that they create a motivation or impulse to approach something else, and it’s most often that “something else” that I try to push back towards written language with my poetry. Some of my favourite topics are visual art, film and television, rap music, and the Toronto transit system.

On the other hand, graduate school and postmodernism have taught me that everything is book-like. So I’d like to think that poetry is right at home with anything poetry might be ‘about,’ each object being its own node of reception, communication, and distortion.

15 - What other writers or writings are important for your work, or simply your life outside of your work?
I hate naming names, but some authors I’ve been into lately include Fyodor Dostoyevsky, Phil Hall, F.T. Marinetti, Erin Mouré, Rachel Zolf, Tom Phillips, Vanessa Place.

I don’t read enough literature, though. Non-literary authors I’m thinking about include Gaston Bachelard, Catherine Malabou, Maurice Merleau-Ponty, Jacques Rancière. And I am almost always reading something by Derrida.

16 - What would you like to do that you haven't yet done?
Shave my head.

17 - If you could pick any other occupation to attempt, what would it be? Or, alternately, what do you think you would have ended up doing had you not been a writer?
In another life, I’m an accountant who spends his nights playing grand strategy games.

18 - What made you write, as opposed to doing something else?
Writing isn’t a single act or decision, it’s just something I end up with again and again. So it depends on what else I could be doing at a given time and place.

I haven’t seen any great films recently, so I’m going to amend the question. The last great videogame I played was Undertale.

20 - What are you currently working on?
A collection of poems written for my houseplants.