I never could have come back to writing because someone started a google doc with me, but because that person gave me the gift of her deep care. She showed up, morning after morning, to help me get back to myself. Our friendship was made up of all this material between us, especially since we’d never lived in the same city. So our friendship was documents—emails, texts, chat transcripts, google docs, photographs, and especially poems. Our friendship was the material of poetry, which we wrote together every day. She wrote as much as I did when I wrote, every time I wrote. And I came to understand that the hours of writing together were most important—the poems were the happy accident of a friend caring for another, at least at first. All my collaborations, I thought, they are all just records of care, of friendship, of love. The poems don’t matter.

And yet, and yet. They are everything, these poems between us. (“Only Collaborate,” Hillary Gravendyk) 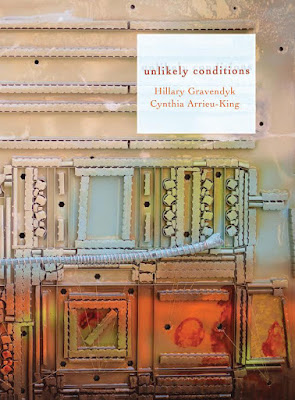 I hadn’t realized that the poems that the late Hillary Gravendyk (March 1, 1979 - May 10, 2014) [see my obituary for her here] was working on with Cynthia Arrieu-King had progressed as far as they had, newly released as the collaborative poetry collection unlikely conditions (1913 Press, 2016). Around the time Gravendyk died, there was mention of a work-in-progress, but I had no idea that it was as developed as it was. With Gravendyk’s short postscript “Only Collaborate” to close the small collection, I’m curious as to Arrieu-King’s thoughts on the process of collaboration generally, and more specifically, with a poet such as Gravendyk. While I understand, on some level, wanting to allow Gravendyk to speak (in a powerful introduction that speaks to how the collaboration, and specifically, Arrieu-King’s friendship, prompted her to return to herself, as well as her own writing), this was a collaboration, after all, of equals, equally; why would Arrieu-King not have, possibly, included an introduction? The most she does is at the end, in the notes, that write: “These poems were written beginning in March 2008 until May of 2014—sometimes while we were sitting in her home in San Francisco or Los Angeles, but mostly while she was on the West Coast and I was on the East Coast.”

For those unaware, Gravendyk was the author of the poetry collection Harm (Omnidawn, 2011) [see my review of such here; and some of the post-Harm poems I was fortunate enough to post via Dusie], and Arrieu-King is the author of a number of collections, including People are Tiny in Paintings of China (Octopus, 2010) and Manifest (Switchback Books, 2013), with a note in her author biography that she “is working with Omnidawn Press and its editor Rusty Morrison on Hillary’s final poems, to be released in 2017.”

A perfect match is a cold predicament.
Imagine a stack of Necco wafers, a flock of
gray birds, schoolchildren. Arrows arrayed
against each other might look

the same, but would we call it perfect?
One perfects when one approaches
the original purpose. Our definitions say nothing
of what, after all, we reach.

We perfect the art of things and one
is our own arrogance. But another is
failure, and a third is
approximation, and every art

perfected is a kind of love or at least a kind of wonder.
So then let’s line up every heart in the room:
a row of wounded animals.

Let’s see who flies and who creeps.

The short, sharp lyrics that make up unlikely conditions are all collaborations between the two, but for three exceptions each, listed at the back of the collection. The poems are thoughtful, introspective and intimate, as though we are witnessing everything said between two individuals close enough that their individual patter and patterns become indistinguishable. I’m quite fond of collaboration [for example: here, here and here], having seen a number of projects emerge over the years, and this might be one of the most coherent I’ve seen, managing a solid, consistant voice and tone throughout, making me more curious about the work of Arrieu-King, a poet whose work I’m otherwise unfamiliar with.