A reading/talk by Janice Williamson (Edmonton) 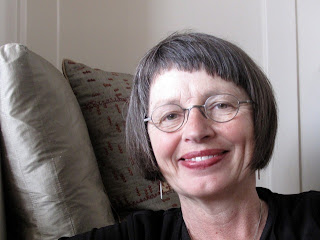 Janice Williamson: mothers a teenager, writes, and teaches at the University of Alberta's Department of English and Film Studies, latitude 53, Edmonton, Alberta.

Her blog/website: the pomegranate (http://pomegranatewomenwriting.wordpress.com) is devoted to Canadian women writing nonfiction and issues of equity.

She is at work on a series of linked creative nonfiction essays. Her story "Fu: the turning point" about adoptive mothering was published in Dropped Threads 3. "The Turquoise Sea,"an essay about suicide and mourning, was originally published in AlbertaViews Jan/Feb 2010. The essay won a Silver Medal in the 2011 National Magazine Awards and was a finalist for the Jon Whyte Essay Prize in Alberta.

She is completing an interdisciplinary and multi-genre anthology about the case of Omar Khadr (see http://omarkhadranthology.wordpress.com). This explores human rights, torture, Canadian domestic and foreign policy, writing in a state of exception, the limits of tolerance, anti-racism, Islamophobia and the culture of fear.