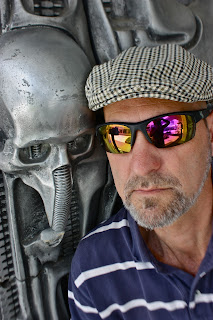 Ben Ladouceur has been a featured reader for the Tree Reading Series, the In/Words Reading Series and VERSeFest Ottawa. His work has most recently been featured in the anthology Pith and Wry: Canadian Poetry edited by Susan McMaster. Previous chapbooks include Nuuk (In/Words Chapbook Series), Alert (Angel House Press) and The Argossey (Apt 9 Press). He will be launching the chapbook Lime Kiln Quay Road (above/ground press).

Bruce Taylor is a two-time winner of the A.M. Klein Award for Poetry. He has published three books of poetry: Getting On with the Era (1987), Cold Rubber Feet (1989), and Facts (1998). He has been a teacher, a puppeteer, and a freelance journalist. He lives in Wakefield, Quebec. His No End In Strangeness, New and Selected Poems is newly out from Cormorant Books.

Stan Rogal [pictured, above] was the youngest of 15 children raised in a share cropper's shack in the back woods of...  Wait a minute, that's someone else. Stan Rogal's work has appeared in numerous magazines and anthologies including: The Fiddlehead, Rampike, New Quarterly, Front Range and filling station.  He is the author of 15 books: 3 novels, 3 story and 9 poetry collections.  He also has a foot in the alternative theatre scene with plays produced variously across Canada.  His latest book is a Selected Works of poetry from Insomniac Press titled Dance, Monster (not to be confused with Lady Gaga's CD "The Fame Monster").  Insomniac Press will also publish his novel, Bloodline, in 2012, God willing and the creek don't rise.
Posted by rob mclennan at 3:34 PM
Labels: Ben Ladouceur, Bruce Taylor, Stan Rogal, the carleton tavern, The Factory Reading Series