John Lavery - 1949-2011
Disappeared en route to Betelgeuse – May 8th 2011 10:22 AM
Disappearing
...(excerpts)
Which way to the airfield?
tell me can I get there from here?
I’m travelling last class
to Betelgeuse, Deneb, Altair
and points beyond
learn to live without, learn to live within
the motto of the cosmic traveller
sleep tight between the spirit and the skin
make your home the horizon
I’m disappearing
tell me can I get there from here?
I’m ditching my high time,
my single space, and my andro’s fear
and I’m moving on
nothing to recall, nothing to declare
the visa of the cosmic traveller
thanks for choosing Labyrinthine Air
we kiss your abyss any new where
J.

What can I tell you about John Lavery? For years now, I've called him “the best fiction writer in a hundred-mile radius of Ottawa,” for the sake of his short story collections, Very Good Butter (Toronto ON: ECW Press, 1999) and You, Kwaznievski, You Piss Me Off (Toronto ON: ECW Press, 2004), and his first novel, Sandra Beck (Toronto ON: Anansi, 2010). The Globe & Mail wrote a remarkably positive article on that same novel, focusing far more on his cancer, the dying author, than some of us were comfortable with; dammit, wasn't his writing enough to warrant attention? Why couldn't they have discovered him earlier?
He seemed to have odd separations, living his home life predominantly in French, and his writing life predominantly in English. He even told me at one point that his three children, now in their late teens and early twenties, hadn't heard him read. Once, when we met for drinks, he told a story of his mother, who had done some modelling in her teens, picked up for silent movie roles, “to look pretty.” It was only because the New York branch of the studio where she worked had shut down that she moved on, deciding not to follow to Hollywood, but instead Toronto, where she ended up marrying, and having children. Only after his mother had died, he told me, was he able to find film reels of his eighteen-year-old mother, showing them to his family, including his older siblings, who had no idea she'd even done this.
His writing was compared favourably to the work of James Joyce, and his Deasil and Widdershins work focused on the writing of Samuel Beckett, first performing as such with Carmel Purkis and Max Middle in 2006 at a Beckett centenary at the ottawa international writers festival. The comparisons are closer than one might first think: Joyce turned language on its ear, and Beckett learned a second language, French, to write in. One could almost say that Lavery wrote fiction in his second language, French, using the language of his first, English. His fiction was densely-packed, emotionally descriptive, gymnastically-lyric and often confusing, with whole scenes in which very little actual “action” occurred. Was this Lavery secretly being a French novelist, hiding in plain sight?
He was filled with odd stories, and contradictions. The upper middle class upbringing in Montreal he hadn't quite realized until years later, the level of comfort. His years of raising the three children he shared with his lovely wife, Claire, whom the rest of us rarely saw. John was careful, thoughtful and generously open, even as he was also a little guarded. There are things we thought we knew about him, and other things we thought we knew, and even other things we hadn't a clue. He appeared quietly about a decade or so ago, introduced to a various writers in the city through the ottawa international writers festival, where he launched his first collection of short stories. Where had this odd and quiet writer, talented as all get-out, come from? Where had he been all that time, before? He emerged, quietly, and before we knew it, he was in the midst of us, collaborating on sound works with Carmel Purkis and Max Middle, opening for Jaap Blonk with Max Middle during an AB Series performance, and performing as part of jwcurry's MESSAGIO GALORE PART VI, all while slowly picking away at his stellar fictions.
It was only two years ago or so that his doctor discovered his cancer, leading him to surgery, and a few sessions of chemotherapy. “Better a semi-colon,” he once told me, “than a full stop.” Hilarious, awful and completely moving, knowing full well this was one of those lines that would be repeated. From that point, he said, he was living in two-week increments. He said he couldn't start another book, presuming he wouldn't live the five years required to finish it, making Sandra Beck (2010) the last book he'd even begun, he'd begin. Instead, he would focus on songs, and spent the second half of 2010 perfecting and recording songs in-between sessions of chemotherapy, even performing when he was able, including at the fall 2010 edition of the ottawa international writers festival. A few weeks earlier, he had performed in Stephen Brockwell's dining room to about a dozen of us, a midnight show during a birthday party Stephen was hosting for Dusty Owl's Steve Zytveld. We all sat, breathless; it was a memorable performance, praised for following weeks. The day he died, he was even scheduled (re-scheduled, after postposting an earlier performance) to perform at the Dusty Owl Reading Series. Instead, a couple of us read some of his smaller pieces.
Moving from fiction to writing songs, without losing any of that sense of play, that sense of gymnastic language. Here's an email I received from him in February:

Hey robby,
Thanks for the interest. I'm doing okay. Chemo ends soon. After that I get a break so I can get fattened up for the scalpel again. And then more, but easier, chemo. That's the plan. Keep your fingers crossed.
I'm within a couple pages of a presentable manu. of Crutches.
Started a song recently. A samba. The chorus goes:
the best defence against
becoming overtired is...
laziness.
Oh, to be sitting in the sun
on Isle-aux-Coudres
within sight
of a blue tent,
and within reach of a breast
taken out of its wrapper,
coming to
room temp.
Howz buy yoo?
The J 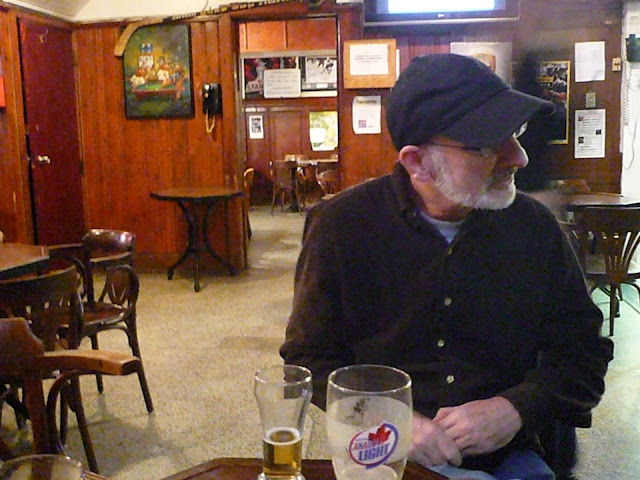 [a photo I took of John Lavery last year, when a group of us met for drinks for no reason at The Carleton Tavern] More recently, I'd asked him for a poem for a little Dusty Owl tribute chapbook, which we'd planned to launch at the reading on May 8, which also was meant to include a musical performance by him. He sent a little poem, writing “best I can do is the lyrics to one of the songs I’m going to sing. If I sing. I’ve never sung the song before in Ottawa, it’s a total piece of fluff I wrote when I was 18 (which is why it’s on the cd, historical interest so to speak).” A little poem, “The Children Green and Golden,” published the day before he died, his last published piece, from the CD we were hoping he was going to finally launch that day. He hadn't performed it in Ottawa, but he had recorded such in Roland Prevost's home studio, so at least someone out there has heard it. Heard him, playing.
Dammit, we loved him. His was the open secret we told everyone about. Why aren't you, we asked, you reading John Lavery? He always seemed amused to see people he liked, always there with a positive and mumbled word of support, especially after a reading he particularly liked.
Mumbling, and a low talker. There was often the word or two in any sentence he spoke that I wasn't entirely sure about. The evening conversation we had at Pubwells a couple of years ago, where he mumbled complaint (without any understanding of irony) that he could no longer understand his mumbling son, with new lower-lip piercing. I just stared back, dumbfounded. Not sure whether to laugh, or try to explain the joke.
He had been generous enough to write a back-cover blurb for my second novel, offering slight editorial comments as well. I had been working my own manuscript of short, sharp stories the past three years, dedicated to him; I had hoped he could have seen it in print. At least I did send him a draft of the manuscript, last fall.
A few hours after Lavery went, his friend and editor at Anansi, Melanie Little, emailed to say that “John sent me his final revision of Sandra Beck one year ago today.” She went on to write:

I'm sure you have lots of good quotes from John, but I thought I'd share this one just in case it serves or anyway just to share it with you period. We had quite an enjoyable (enjoyable for me, particularly) back-and-forth going in the comment field during our editing of Sandra Beck. Here's one comment he wrote, apropos of one of the many puns embedded in the book, which I think says a lot about his writing:
Puns have been called the lowest form of humour, but only by those who are not good at making them. I think dirty jokes are the lowest form, unless of course they turn on a good pun. Many people are irritated by puns, and I don’t blame them, seeing as plays on words are ominous reminders that language is a treacherous form of communication, on which, being linguistic animals, we have no choice but to depend.

In a note posted to facebook yesterday afternoon, Stephen Brockwell wrote of Lavery's cancer, and the fact that he hadn't quite considered that John wouldn't remain cured. How we have to remember him, writing:

Unless. Unless we talk about him incessantly. Unless we read him when we go to bed. Unless we insist that his beautiful songs are sung. Unless we offer whatever help we can to his family who are his true re-incarnation (his new embodiment in flesh).

Thank you for this, rob. I miss him, even though I didn't get to know him as long and as well as I'd like. In the short time I knew him, he made me feel a part of his circle, and I truly feel sad at his passing.

But I know we can keep him alive in spirit at least. I'm so glad he left us with so much to celebrate and remember him by.

Sorry to hear about John. A remarkable person and writer.

This post is really moving. Glad we had a chance to publish him in the Puritan.