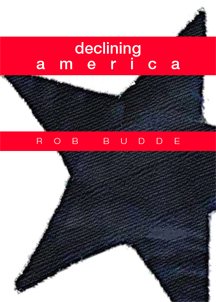 In his eighth trade book and fifth poetry collection, Declining America (Toronto ON: Bookthug, 2009), Prince George, British Columbia writer Rob Budde [see a little interview I did with him moons ago, here] explores the idea of America “not as a nation but as a linguistic strategy” (as the back cover tells us) through a blend of travel, translation and Jean Beaudrillaud’s book America (trans. Chris Turner, 1968). A writer who found his footing in Winnipeg, Manitoba, who moved to Prince George to teach, he is the author of the poetry collections Catch as Catch (Winnipeg MB: Turnstone Press, 1994), traffick (Winnipeg MB: Turnstone Press, 1999), Finding Ft. George (Madeira Park BC: Caitlin Press, 2007), all of which riff off the long/extended/serial poem worked by some of his elders, the Canadian poets Dennis Cooley, Robert Kroetsch and Barry McKinnon. Other books include the novels Misshapen (Edmonton AB: NeWest Press, 1997) and The Dying Poem (Toronto ON: Coach House Books, 2003), a collection of prose poems (or short fiction, depending on whom you ask), flicker (Winnipeg MB: Signature Editions, 2005), as well as the anthology In Muddy Water: Conversations with 11 Poets (Winnipeg MB: Signature Editions, 2003). In seven long poems exploring different ideas and formal structures, Budde’s Declining America moves from exploratory prose through to the prose poem, to the lyric and the displacement of words scattered across the page. How does a neighbour so close explore “America”? Close enough to know our neighbour even if they might not us, close enough to feel overlooked and overshadowed, but does the shadow overwhelm, in the end, perception? And how do we, or poems, contradict the idea that we’ve simply become the fifty-second state?

the creation of speed freedom, a distillation to intoxicate evenly

Not to say the conversation is but one-sided, whether the magnificent poem “Hockey Night in Canada” from Lisa Jarnot's Black Dog Songs (Chicago IL: Flood Editions, 2003), Jack Spicer, writing his “Seven Poems for the Vancouver Festival” included in his recent My Vocabulary Did This To Me: The Collected Poetry of Jack Spicer, eds. Gizzi and Killian (2008), or even Californian poet Tom Clark writing out his tribute to/translation of Canadian musician Neil Young in his Neil Young (1971). But what will our neighbours to the south think about how we sometimes speak of them? It’s one thing for Americans, poets or otherwise, exploring themselves critically; what is this thing American-born Canadian poet Budde is doing, a critical explore or series of obfuscated reference points?

carefully, ever so
pre cisely crimping the
edge of the
marking the place
tenderly, understanding
only that the return
the assurance always
and then, the look up
a moving sidewalk
ending, look down
and so, nodding assent
the book, the body
the idea of an airplane
affirmed no acquiescence
no, look down (“Cramped O’Hare Writing”)

In the best kind of continued long poems or poem of any kind, Budde doesn’t give answers, but instead opens up a series of questions and explorations, some of which even manage to contradict, and at the end of the opening poem, is this a comfort or a warning when he writes “My fellow citizens / will be overcome. We will pass on, / carry on, we will, // we may.” (“Prologue: A Reiteration”)?
Posted by rob mclennan at 8:00 AM
Labels: Barry McKinnon, BookThug, Dennis Cooley, Jack Spicer, Lisa Jarnot, Rob Budde, Robert Kroetsch, Tom Clark