Deb Olin Unferth, Revolution: The Year I Fell in Love and Went to Join the War


You ask my mother and father what it was like for them when I ran away to join the revolution that they’ll say they were traumatized. But to hear them tell it they were already traumatized. They have a whole list: there was my Christian conversation and, before that, my high school boyfriend, there was my brother from the time he was born, my father’s not being able to play baseball, the teasing my mother took as a kid. Still, it’s kind of a wonder that they didn’t hire a bounty hunter to come find me and drag me home. In fact they didn’t do much to get me back. They settled on one plan and stuck to it, and it did finally work: if they sent no money, we’d run out and eventually have to come home. A convenient plan for them, thinking about it now. A nonplan, really, a plan of inaction, of least resistance.
Later, from Nicaragua, I called and invited them to come “visit the revolution,” and they said no. Maybe in those days that’s simply how parenting worked. 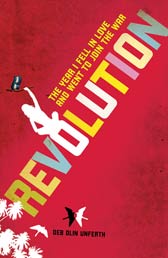 There was just something about the excerpt of New York writer Deb Olin Unferth’s Revolution: The Year I Fell in Love and Went to Join the War (New York NY: Henry Holt, 2011) in a journal I read recently that compelled me to find a copy of the book, something I found utterly charming about her coming-of-age memoir while travelling with the man she planned to marry, following him to Nicaragua so they could join the Sandinistas, and join the “revolution.” I haven’t yet read her novel Vacation (McSweeney’s, 2008) but her collection of short fiction, Minor Robberies (McSweeney’s, 2007) is quite magnificent, and one I highly recommend, originally sold as a McSweeney’s three-pack with similar collections of short, strange stories by Dave Eggers and Sarah Manguso. There seem a similar tone and construction to these two works, as Unferth writes her series of short vignettes, small self-contained accumulated pieces that eventually make their way into a longer work of her year of confused travel, volunteer work, unwashed love, foreign meetings and various illnesses. Obviously, unlike the short stories, Revolution: The Year I Fell in Love and Went to Join the War works from a loose narrative thread of her time as a young adult travelling parts of foreign countries searching for meaning and self, from six sections made of smaller pieces that take her immediately from the bedroom in her parent’s house to a series of realizations and discoveries both small and large. What makes this book so appealing is just how sweet and naïve the author depicts herself, wandering around El Salvador and Nicaragua, fighting the fight she realizes far too late only foreigners are and, by the time they had even arrived, was pretty much over. She had missed her revolution, and barely even understood enough about it had she been there to catch it. Deb Olin Unferth’s memoir is sweet, honest and damned funny, an utterly charming and unusual memoir of growing up a stranger in a strange land. At eighteen years old, travelling with a man she barely knew, and idealistically trying so hard to live in a way that matters, but only realizing too late what exactly she might have signed up for. Through all of this, following as her perceptions that young love have over everything, rose-coloured and sweet, eventually fall. So many people, during that period of self-discovery, head out into the world to do their important works, but so few of them do in such a foreign place, missing the mark so completely on the revolution she set to fight for, learning her important lessons along the way; so few journeys are written with such compassion, such sweet and brutal humour and hard-won wisdom. So few journeys are ever written so well.
Posted by rob mclennan at 9:45 AM
Labels: Deb Olin Unferth, Henry Holt