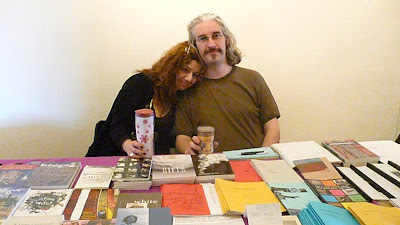 [rob & Lainna at the Toronto Small Press Fair, December 12, 2009] It’s been a while since I’ve done a notes. Will you be taking my January-March 2010 poetry workshop in Ottawa, or signing up for a 2010 above/ground press subscription? I can barely keep track of anything else. Watch for the sixth annual issue of ottawater in January. I recently spent time at the Toronto small press book fair, the ottawa small press fair and Canzine; where have all the small presses gone? Michael Bryson’s new collection of short stories, The Lizard, is now available from Chaudiere Books, and above/ground press has some new titles from myself and Emily Carr, working up to a number of new titles in the new year, including one by Ken Norris.

Cobourg ON: I’m not sure what happened to his previous chapbook journals Syd & Shirley (named after his late parents) or Peter O’Toole: a magazine of one-line poems, but November 2009 saw the first issue of Stuart Ross’ Hardscrabble: a little magazine of poetry, produced through his ongoing Proper Tales Press.

Featuring work by Nelson Ball, Alice Burdick, Loren Goodman, Susan Kernohan, David W. McFadden and Hugh Thomas, most of whom Ross has been publishing and encouraging for years through various of his editorial/publishing ventures, and becomes the first little journal produced from his new home in his recently-relocated home in Cobourg, Ontario. But still, why is Ross still one of the main homes for most of the writers featured here? Has small publishing pulled back that much, that we don’t really see writing by many of these but for appearances through one of Ross’ editorial movements through This magazine, Mansfield Press or The Mercury Press (especially now that David W. McFadden has been up for the Griffin Poetry Prize)? For further information on this little venture of his, email hardscrabble@bell.net

the party is already in orbit.

Someone hands me a glass of wine

which hangs in mid-air,

as do the poems

when they are released from the book.

How lucky we are

to be a part of this experiment.

You drift back from the forward porthole.

We touch our foreheads together

so we can hear ourselves think.

in a lawn chair,

held up by a hundred helium balloons.” (Hugh Thomas)

Toronto ON: In Ottawa poet Cameron Anstee’s new chapbook, Water Upsets Stone (Toronto ON: The Emergency Response Unit, 2009), he seems to be working a poetry of increasingly sequential gestures, akin to the poetry of Monty Reid or Barry McKinnon, gesturing a sequence of moments that accumulate into something other. This is a poetry that carves and works to carve out its own essence, as his writing slowly begins to mature, and achieve, with each subsequent publication.

we have been standing this whole time

carry less weight in to winter

but lengthen in ground to upset foundations

I am not sure where to locate the tree

In this poem carved out of three parts—First Law, Second Law and Third Law—just what is it about stone? Is this stone in the Reid or Don McKay sense, or in the McKinnon sense? Is this ecology or human history or something else entirely?

in the beginning there is

to calculate the huge amounts of energy

that would be released

if the whole of an available mass

could be converted into

in the beginning there is

Thanks much for your comments on HARDSCRABBLE! There will likely never be an issue 2 of Syd & Shirley, and Peter O'Toole #5 is coming out in the new year, as is HARDSCRABBLE second.

As for "where have all the small presses gone?" in relation to the Toronto Small Press Book Fair, an awful lot of them stopped going in the Era of the Litigious Boneheads.