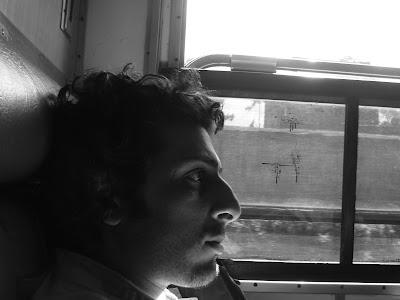 Moez Surani's poetry and short fiction have been widely published in Canada. He has won the Kingston Literary Award, the Dublin Quarterly’s Poem of the Year and most recently a Chalmers Arts Fellowship which supported a research stint to India and East Africa. He'll be moving to Switzerland in January to begin a writing residency where he'll focus on a novel. Reticent Bodies (Wolsak & Wynn, 2009) is his first collection of poems.

I feel more serious now. I also feel closer to my friends.

I came to fiction first – as a reader at least. But when I began to write, I was interested how meaning could be embedded in sound and rhythm and texture. The echoes or ironies or shifting relationship between content and form interest me. Poems are the best place for that kind of enquiry.

It seems to depend on the speed and tone of the work. Most of “Ally Dolle” was written quickly, I think, on just one page in small writing, then I went for a walk and when I came back I wrote the bar scene that’s towards the end of that poem. “Country of the Blue” was written in pieces over a few days. “Realpolitik” was another quick one; the title took a few weeks to come though. I’m not a note-taker. The language I want is in the colour and mood of that initial impulse, so if I get the impulse I’d like to write then and there instead of preserving it in notes as a linguistic half-measure.

A poem usually begins with an image or sound. A piece of fiction is more likely to begin with a situation or dialogue or with a character. I don’t cobble things together. Like most people who are fascinated by minimalism, there’s an idea or essence that I’m very interested in, which cobbling would mar.

Going to readings and listening and meeting people afterwards is more a part of the creative process for me than giving them. I usually get a bit edgy the day of a reading but afterwards I can feel a catharsis.

I don’t have a consistent doctrine. The concern I have when I’m writing is how do I deliver this poem or this idea or this impulse purely. All I care about is if I’ve rendered it. If you render it well, the theoretical things will exist, you wont have to be conscious of them. They will be there and finessed and exist within an interesting gestalt of ideas.

There isn’t a generic role. Each writer creates their own role. You do what you’re capable of and what you deserve or need. I don’t think a writer has an obligation to be a public intellectual, unless their oeuvre has an activist bent to it. Then I think if something happens, such as the Iraq War, you should speak up. Otherwise the nice, left wing writing just looks like an attempt to be hip. When that war began and there was silence in the editorial pages – like nothing from writers – I looked at my shelf and thought why have I paid all this money for these books written by these lefties – why all these left leaning historical fictions? – where are their voices now? If you give the impression that you’re in that arena then silence is complicity.

I enjoyed working with Jeanette Lynes on this book. I feel lucky to have had her opinions steer the last phase of this book. She delivered good suggestions and explained her rationale so well that when I went through her edits, I felt as if I was seeing the poems in Reticent Bodies with fresh eyes. Working with Carolyn Smart is essential; whenever I write something where I’ve taken a risk that I can’t tell has worked or not it goes to her. I have a couple other friends who are excellent readers too: I value responses from people who have hard minds and who aren’t clouded by perceptions of intellectualism.

I have trouble taking maxims seriously. Those phrases seem to be the kind of thing that a dedicated writer sets out to destroy. The best things people have given me aren’t verbal or articulate or conscious. Carolyn Smart gave me confidence and pushed me, almost relentlessly. Steven Heighton, I can’t even remember what he said, but after spending some time with him – my poems were becoming more dense and compact, with just these miniscule shifts – after spending time with him they cracked open and flow longer and larger now across the line and down the page. There isn’t any one line of wisdom they said that I orient myself around, but they got through to me.

In that first impulse I can tell what genre it is, so it isn’t a matter of me moving, but rather discerning. It’s like catching Frisbees and putting the yellow ones on one side of you and the blue ones on the other.

When I was working I got up early and put a few hours in in the morning. This fall though I’ve been using a Canada Council grant and haven’t needed to hold a job so that routine has fallen away. I’m happily erratic now.

I don’t think you can seek out inspiration. It isn’t conscious or methodical. I can seek out certain books or authors but that’s more to fill in my reading than fire up my writing. When I get tired, or get to feel strained, then I back off.

What I want changes from day to day. One day I’ll want to write something that’s good and true and beautiful and the next day I’ll see through that and want something crass or absurd or subversive. I also go back and forth on the role of politics in art or poetry. Some days it seems to be the most relevant thing, then other days, or in other mindsets, that interest makes me feel naïve.

Books come from experiences and thoughts, which are then whirled up in the imagination. They may be delivered by what a writer knows about craft and art, but I don’t know if a deep, textured work could be made purely from other books.

I’ve made friends with a lot of writers – in Montreal when I was there for a couple years and now in Toronto. I like reading their work and hearing what they’re reading or how a story or poem came together for them or what they’re going through.

Well, I recently kicked down a friend’s door so I’ve been considering a foray into crime.

What I wanted to read didn’t seem to be there. I couldn’t find it. I see all of these absences when I read, and missed opportunities. The other thing is that – if you have the writing instinct – reading can feel like you’re standing over someone’s shoulder and if you keep seeing the missing dimensions you get frustrated and just want to take the pen yourself.

I liked Bolano’s Amulet. His best work seems to exist in a moment of pure creation. It’s like he’s always at the instant of the big bang when the universe is flying apart; he manages to do away with the artifice of rising action and dénouement and those kinds of things. I saw a great movie a few days ago: Police, Adjective. A dark and charming Romanian movie with some very long scenes – there are a couple of long, beautiful meal scenes. They didn’t edit out the silences or condense conversations; they let the cameras roll so it’s the actors’ timing that win the scenes.

The past couple of weeks I’ve been working on some short fiction pieces. They’re like dark little parables. Soon I’ll wrap this up and focus on a novel.

Posted by rob mclennan at 8:59 AM
Labels: 12 or 20 questions, Moez Surani, Wolsak and Wynn